A company of Marine recruits took their places among the storied yellow footprints at San Diego Marine Corps Recruit Depot Monday to begin their training, after more than two weeks of quarantine at a local hotel.

This step marks a milestone in the Corps’ efforts to continue training in an altered “COVID-19” environment, officials said.

The Marines started sending new companies of recruits into quarantine with the arrival of Echo Company to San Diego on April 13, after the coronavirus began spreading among the previous company to arrive — Bravo Company — the week before. 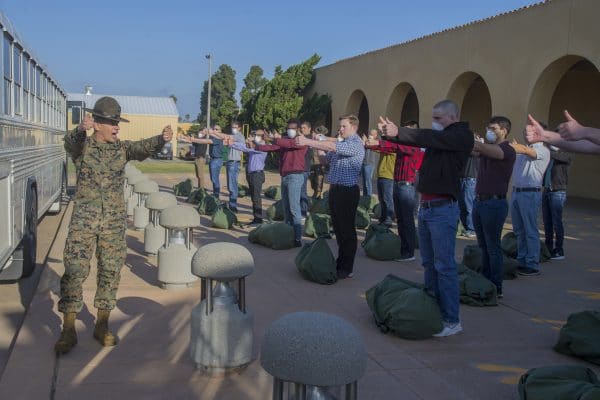 While cases of COVID-19 among the recruits of the 237-man Bravo Company surged, the Marines are seeing far fewer cases among the recruits of Echo. The Marines, following a Pentagon order, are not disclosing actual numbers of COVID-19 infections among its recruits, but a depot spokesman said about a handful from Echo Company tested positive Friday. None have symptoms.

“They tested positive on Friday and were moved into isolation on MCRD,” said Capt. Martin Harris, a depot spokesman.

Because the recruits of Echo Company were quarantined in hotel rooms in pairs, fewer than a dozen will potentially be held back from beginning training whether they tested positive or had a roommate who did. Harris said 254 recruits made the transition from quarantine to the depot Monday.

Brig. Gen. Ryan Heritage, the depot’s commanding general, said the strict quarantine implemented after the outbreak among Bravo Company had the desired effect of limiting the virus’ spread among Echo Company.

“We’re continuing to learn a lot about the virus,” Heritage said Monday in an phone interview with the Union-Tribune. “We’re sending daily updates throughout the Marine Corps — best practices are really what we’re learning.”

Heritage said that several recruits from Bravo Company — the one with the larger outbreak — are now out of quarantine and have resumed training.

“About a week ago, those testing negative were taken out of quarantine and back into training,” Heritage said. “We’re going to make every effort to keep that company together — there’s a unique pride they’re carrying despite being quarantined.”

On April 29, the Marines said 48 recruits from Bravo Company tested positive for the coronavirus, with several test results still outstanding. Harris said Monday that those numbers rose as more results came in.

“They’re around the same percentages of other cases of 100% testing,” Harris said. “They’re consistent with what is being found in similar populations that live in close quarters among a young, healthy group of people.”

On two Navy ships, the aircraft carrier Theodore Roosevelt and the guided-missile destroyer Kidd, the Navy found between 20-25% of those crews tested positive.

The Navy resumed training for two phases of its SEAL and Special Warfare Combatant-craft Crewman training at Naval Base Coronado Monday, seven weeks after three cohorts were suspended, as the global COVID-19 pandemic began spreading among San Diego’s military community.

The third cohort will resume training May 11, the Navy said in a statement.

“We took a conservative approach to properly assess our student population and establish protocols in order to minimize risk to them during training,” said Capt. Bart Randall, the commodore of the Naval Special Warfare Center in a written statement Monday.

Trainees will be limited in numbers at certain training events and in classrooms to maintain social distancing and to be screened for COVID-19 daily, the Navy said.