Scott Beaudry survived four years of active duty in the U.S. Marine Corps, from 2003 to 2007, coming out of three combat tours in Iraq without a scratch. He had been shot at and had his convoy hit by IED attacks, but he himself never sustained any injuries. Last month Beaudry learned just how disruptive a gunshot wound could be.

Beaudry had been riding in his utility terrain vehicle (UTV) on an April 25 “social distancing” camping and off-roading trip in Lake County, Oregon when something hit him in the chest. While he initially thought another UTV in the group of about 13 vehicles had kicked up a rock that hit him, he finally realized several minutes later that something was wrong. After calling in an emergency helicopter flight and being flown 30 minutes to the nearby St. Charles Hospital in Bend, Oregon he got an x-ray showing the bullet that had struck him lengthwise along the collarbone. 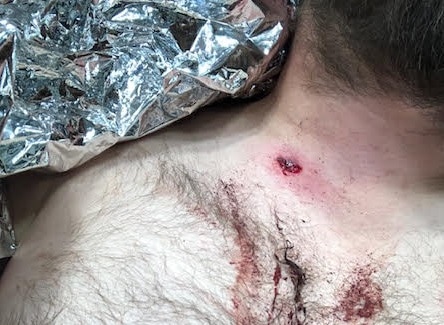 “I kind of said ‘ow’ you know when it happened, I wasn’t thinking much of it, but I have a full windshield up on my side-by-side. I’m thinking, ‘how could a rock hit me, because I have a windshield and a roof?,” Beaudry told American Military News.

“Not thinking nothing of it, I’m like ‘how the heck did that happen?’ Well I felt it getting a little bit damp, so I took my glove off and I put my fingers up where I got hit. I had seen red on my hands and I thought ‘huh,'” Beaudry said. “So I thought there’s some little kid out there with a paintball gun shooting at us as we drive by.”

Not wanting to slow down the whole group on his account, Beaudry tried to ignore the hit, but became increasingly concerned as the damp spot on his shirt grew. Once the group of off-road vehicles came to a stop, they finally realized that Beaudry had in fact been shot. 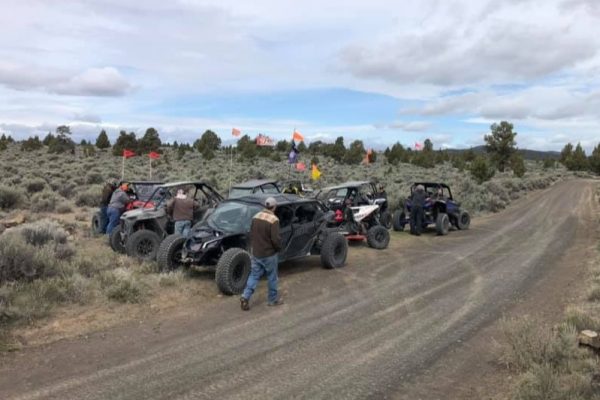 A photo of the group of utility terrain vehicles (UTVs) during their April 25, outing when Scott Beaudry was shot. (Photo provided by Scott Beaudry)

The group called 9-1-1 after the incident and a pair of vehicles from the Lake County Sheriff’s office came in, along with the emergency helicopter. While the group waited for the helicopter to arrive, Beaudry sought to reassure passengers of the other vehicles, including some children, that he was okay and not in a great deal of pain.

“I’m not in that much pain,” Beaudry recalled at the time of the incident. “Like the pain level is a two out of scale of one to ten. So I wasn’t in that much pain. I don’t know if it was because I was in shock that it happened.”

Shawn Scranton, a friend of Beaudry’s that was in the group of off-road vehicles during the shooting incident said, “It was kind of funny, he kept apologizing for the situation and that kind of broke the mood up a little bit.”

Beaudry was flown away from the scene of the incident and while he said the shock eventually subsided and the pain grew from about a “two” to a much more noticeable ache every time he moved. The doctors believe the round that hit Beaudry may have been a 9mm hollow point, though Beaudry noted the round had hit him and split his collarbone down the middle before rotating and pointing back out the entry wound it came in. He suspects the round may have been a standard 9mm round, though neither he nor the doctors can verify as the bullet remains lodged in his collarbone. 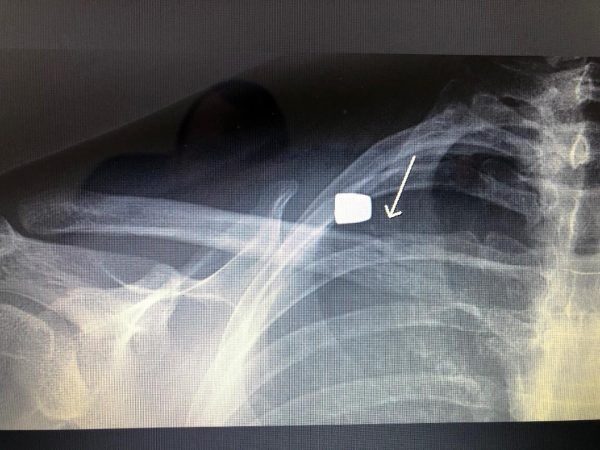 Though he survived the gunshot, Beaudry’s worries over the incident are now also become a financial concern.

The bill for the emergency helicopter ride alone has already come in at nearly $63,000. He also cannot continue to work as a logger, as his doctors have advised him to avoid lifting anything more than five pounds. He believes that with all other hospital bills and lost wages from five weeks of lost work, he can expect the total cost of the incident to come out to more than $100,000.

Scranton has set up a GoFundMe fundraising page to help raise some of the money to cover his friend’s medical costs, with a fundraising goal of $50,000. Even if he can raise the fundraising goal, Scranton said he knows the money won’t fully cover all the expenses from the shooting incident.

“I had never used [GoFundMe] before, and I had seen other people use it for a lot less, their pets or just frivolous things,” Scranton said. ” . . . His life flight alone is probably, actually going to exceed our goal. I didn’t want to put it at $100,000, because that just seemed too lofty of a goal, but I figured 50 at least, that would help.” 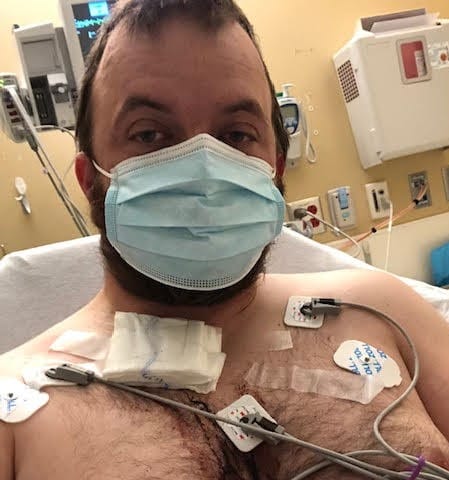 Beaudry said isn’t quite sure what his rehabilitation process will be like, and is awaiting a follow up appointment at his local Veterans Affairs hospital. He said he hopes the VA will help with the medical bills but acknowledged the cost isn’t the VA’s responsibility.

“I’m just hoping that whoever did it, you know turns, themselves in and just admits to it,” Beaudry said.

Beaudry said he was glad he was the one who got hit and not one of the children in the group.

“Where the bullet hit me, would have hit a kid in the head and probably would have killed the kid,” he said.

Chris West, who was riding in the vehicle behind Beaudry had his ten year old son in the passenger seat, while his wife and daughter were in the vehicle behind him. West recalled being the first person to pull up and check on Beaudry after they realized he had been shot, and the fear among several in the group that the shot was not fired by accident and that there might still have been an active shooter in the bushes.

West recalled chambering a round in his own pistol, which he was carrying concealed at the time, and said he told his son to stay down as he checked on Beaudry and tried to assess the danger of the situation.

“What if that was my boy,” West said said.

West said his son has already been disturbed by the shooting and whether he might have been hit had the shooting happened slightly differently.

“I’m hoping it works itself out,” West said, though he noted counseling may be in order for his son.

The Lake County Sheriffs are still investigating the shooting incident, and no one has stepped forward to claim responsibility.