Gun shop owners across the state are back to selling firearms this week after a judge sided with a Leominster lawyer and several local shop owners who argued the state’s COVID-19 ban was unconstitutional.

“I had to at least stand up and say, ‘This is not acceptable,’ ” John DeMalia, one of three Central Massachusetts plaintiffs in the lawsuit, said Monday.

DeMalia, owner of DeMalia Firearms & Training in Hubbardston, is one of many gun shop owners upset over the state’s decision to not allow firearms retailers or shooting ranges to stay open as essential businesses amid the COVID-19 pandemic.

DeMalia and other plaintiffs last week asked a federal judge in Boston for an injunction against the state’s order, arguing that it ran afoul of the Second Amendment. 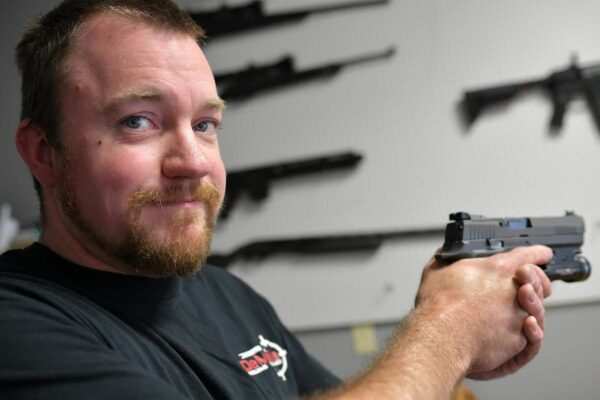 Shops were allowed to open as of noon Saturday, and are limited to serving four scheduled customers per hour between 9 a.m. and 9 p.m., among other restrictions.

The judge has yet to rule on shooting ranges. The plaintiffs’ lawyer, Andrew J. Couture of Leominster, said Woodlock has requested additional information on that topic and will hold a hearing for arguments at a date to be determined.

Couture said he was pleased that the judge essentially agreed with his argument that the state had violated his clients’ rights under the Second Amendment.

Couture said the state was not able to articulate a valid response to the question of why liquor stores were allowed to stay open while gun stores were not.

“Last time I checked, alcohol wasn’t in the Constitution,” said DeMalia, adding that he was pleasantly surprised at the tone the judge struck with the state.

Law360 reported last week that Woodlock, in the first of two hearings on the matter, did not accede to arguments by the state that the ban was only temporary and was necessary to protect public health.

“There’s been a good deal of time with no formal justification, and sustained, not only temporary, impingement of Second Amendment rights,” Woodlock said, according to Law360.

Other arguments the judge found unpersuasive, according to Law360, included that some ammunition was still available at Walmart, and that people could go to New Hampshire to purchase firearms.

“It’s clear that our AG is not very Second Amendment friendly,” said DeMalia. “She does not understand the concept of rights versus privileges.”

A spokesperson for Healey said Monday that the attorney general’s office is “deeply disappointed by the decision, and we believe Gov. (Charlie) Baker was correct both as a matter of law and as a matter of public safety when he designated gun shops as nonessential during this pandemic.”

The decision on what businesses would be deemed essential came from Baker, not Healey, though the plaintiffs named both as defendants.

Baker spokesman Terry MacCormack said Monday that the administration is working with the attorney general’s office to review the ruling.

Confusion resulted April 1 after the state listed gun shops as essential, but then removed shops and ranges from that list later in the day.

Healey, in a Tweet April 1, wrote, “Gun shops and shooting ranges are NOT essential businesses during a public health emergency. We cannot undermine the safety of our police officers, first responders and domestic violence victims.”

DeMalia, who opened his shop last year, said the closure has been difficult on him financially. According to the state, he made 18 sales during the ban; he said all those sales were to law enforcement, which was allowed to keep buying over that time period.

DeMalia said though it will help being able to sell to the public again, the bulk of his revenue was coming from teaching firearms courses. The state has yet to allow that to continue, ruling that proposed virtual classes are not sufficient.

Couture said in addition to the pending ruling on shooting ranges, he is hopeful his clients will be able to recover damages for their lost sales.

“This could have all been avoided if the state would have allowed the shops to get state aid,” he said, but they were denied the same kind of financial assistance offered to other industries.

DeMalia said he isn’t optimistic he’ll see any damages. For him, the lawsuit was a matter of principle.

“You can’t just ban (gun sales) on a whim,” he said, adding that he hopes the ruling will prevent what he sees as politically motivated restrictions on Second Amendment rights in times of crisis.

Other local plaintiffs in the lawsuit include Bear Arms of Orange and the Hardwick Rod and Gun Club. Neither could be immediately reached by phone Monday afternoon for comment.

Army reservist gets no sleep collecting the bodies of coronavirus victims: ‘It’s not a job for everyone’