Dean R. Kahler’s first college semester was nearing an end when he went home for the weekend 50 years ago this month to celebrate his 20th birthday.

The northeast Ohio country boy had worked in the Republic Steel melt shop in Canton to help pay for school and got a late start on college. He had a high draft number, so he didn’t worry about going to Vietnam. He looked forward to four years of academics to launch his chosen career in public service.

When he returned to campus Sunday afternoon, everything had changed. Two days of anti-war demonstrations culminated in the torching of a campus military building. The governor came to town vowing to restore order and called in the Ohio National Guard. Curfews were set and armed troops patrolled the grounds.

And within 24 hours, on May 4, 1970, Kahler’s world would forever change amid a violent combustion that put a hard time stamp on the end of the1960s and delivered the war to the doorstep of America’s heartland.

That’s when guardsmen opened fire on a crowd of students at Kent State University, killing four and wounding nine, including Kahler, who suffered a spinal-cord injury that permanently paralyzed him from the chest down.

“It was a sleepy little town,” said Bill Gordon, a local author and expert on the topic.

Gordon grew up in Ohio but went away to UCLA for college. He was drawn back to Kent State after the shootings. Upon graduating in 1973, he set out to write “Four Dead in Ohio,” In which he tried to get to the bottom of what happened and why.

“The police and the guardsmen weren’t very prepared or sophisticated,” said Gordon, who lived for years in Laguna Hills and now makes his home in Rancho Mirage

Kahler has other ideas.

“When you consider the location of Kent. It’s surrounded by Akron, Canton, Cleveland and Youngstown,” Kahler said in a recent interview with the Southern California News Group. “Those are not exactly hotbeds of liberal thought.

“Then again,” Kahler said, “if you wanted to put an end to people who are disagreeing with you as a government, why not do it where middle America works and lives, right in the heartland of the state of Ohio? That might have been part of the grand plan of (Ohio) Gov. (James) Rhodes or (President) Richard Nixon.”

Gordon isn’t so sure.

“I know a lot of people believe that,” the author said in a recent interview. “There’s no evidence to support that. There’s nothing in Nixon’s files or anything else in the literature which supports it.”

Nixon had announced on Thursday, April 30 that he was sending U.S. forces into Cambodia, breaking a promise and spawning protests across the nation. On Friday, Kent students rallied peacefully, but bonfires and looting that night near a row of bars downtown spilled back onto campus, leading to the burning of the R0TC. barracks Saturday.

When Kahler returned Sunday afternoon, he said he was disheartened by the chaos and the lack of direction from the university or student governance organizations.

“There was lots of misinformation and conflicting information Sunday,” he said. “Even the graduate student who lived on my floor didn’t know what the hell was going on.”

A student rally was set for noon Monday and Kahler, who says he is anti-war by virtue of his pacifist religious beliefs but “not a radical,” chose to attend.

“I was hoping somebody from the university would come and speak to us and give us some guidance,” he said.”But none of that was happening. We were met with nothing more than, ‘get off campus. You’re not allowed here. Get out of this area.’ The university really missed a chance to work with the students,” Kahler said.

Instead, National Guard troops were on the march with M1 rifles and fixed bayonets, launching tear gas to try to disperse the crowd.

“They were chasing us around,” Kahler said, describing the guardsmen’s march up Blanket Hill next to Taylor Hall, home of the College of Liberal Arts, and down the other side to a practice athletic field where they huddled, apparently deciding their next move. They retraced their steps and started back up the hill, parting the sea of students.

“By this time it was almost 20 after,” Kahler said, “and I knew I had to get ready to go to my 1:10 class. That was my ultimate destination, to stop at the (Student Center) Hub, grab a cup of coffee and walk across the street to my class.

“Once they got to the top of the hill – I was at the bottom of the hill – I saw them turn with full deliberation, pull their rifles up to their shoulders and start shooting. I had nowhere to hide So I just jumped on the ground and was surrounded by bullets it seemed like. I couldn’t believe why they were shooting, or shooting at me in particular. I was a football field away from them.”

When he was hit, Kahler said it felt like a bee sting, “and my legs got tight and then relaxed. So I knew I was hit, but the bullets kept coming. I was hoping I wouldn’t get hit again. And I knew immediately I had a spinal cord injury.”

At 12:22 p.m. that May 4, 26 Ohio National Guardsmen from the 145th Infantry and 107th Armored Cavalry Regiments fired 59 shots at the group of student demonstrators in a 13-second volley.

Killed were Allison B.Krause, 19, and Jeffrey Glenn Miller, 20, both protesters. Also deceased were William Knox Schroeder, 19, an ROTC scholar, and Sandra Lee Scheuer, 20, both bystanders on their way to class. Miller was closest to the guard at 265 feet. Scheuer, at 390 feet, was the furthest away. 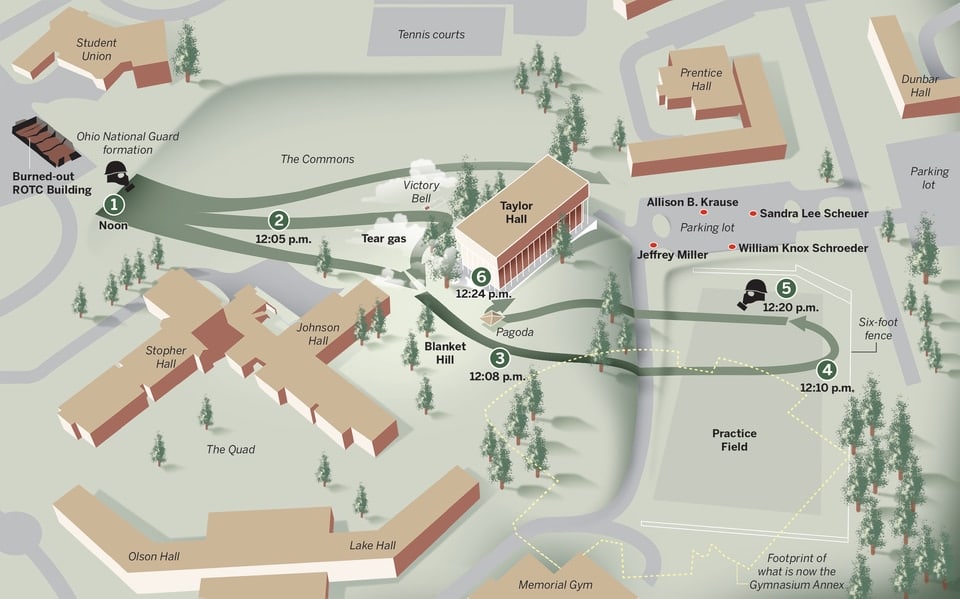 This graphic shows how Kent State University students and the Ohio National Guard interacted on the day of the shootings, May 4, 1970. (Chris Morris, The Plain Dealer/TNS)

By nightfall, the campus was evacuated and the school was closed.

In the aftermath, 24 students and one faculty member – the Kent 25 – were charged in the demonstrations and the burning of the ROTC building. A few were convicted but most charges were dismissed. Eight guardsmen were indicted by a grand jury, but their claim of self-defense was generally accepted and charges were dismissed before the case went to trial.

Federal civil action for wrongful death and brought by the victims and their families against the guardsmen, the state and the president of Kent State resulted in unanimous verdicts on all counts, but the case was reversed on appeal and settled out of court for $675,000 and a statement of regret.

But questions persist 50 years later, particularly why the guardsmen felt the need to open fire when the protesters were so far away. Was there an order to fire?

Gordon had thought for years that someone, a guardsman perhaps, would come forward to fill in the blanks, but now acknowledges that was “wishful thinking.”

“I think a lot of the secrets wen to the graves with…all the main commanders who were there,” Gordon said. “But I still think there had to have been an order to fire because of the way so many witnesses said that they turned in synchronicity.”

“I think there were at least at least a few of those guardsmen who had targets,” said Di Paolo, now retired. “(Injured student) Alan Canfora waving that black flag was a real easy target.”

The preface to the new edition of Gordon’s book includes the latest on the FBI’s conclusion that the tape of the shooting did not reveal an order to fire. It turned out the FBI used software that was seven generations older than what computer experts at the time were using.

“The National Academy of Sciences could probably clarify the issue by retesting the tape with whatever the latest technology is out there,” Gordon said, “but no one is pressing the issue or interested in following up.”

Gordon has been critical of what he sees as the university’s lack of interest in getting to the bottom of things. He thinks the May 4 Visitors Center, which opened in 2014, despite a thorough overview of the times and events doesn’t address the questions head-on.

“It gives short shrift to the struggle for justice at Kent State or the search for truth at Kent,” Gordon said. “It didn’t even acknowledge there was still a controversy. Nobody there was interested in it. The faculty seems to lack any curiosity about what happened on May 4.”

Still, Gordon acknowledges that the history has largely been written by now.

“The only thing that hasn’t been explored are the stories of the National Guardsmen. I never felt satisfied that they were telling the truth,” he said. “But there have to be some people who know. There’s just no incentive for anyone to come clean at this point.”

Gordon thinks the 50th anniversary is “the last hurrah for the radicals, and the case is going to be dead after this, finally. It’s amazing that it lasted as long as it did. There was never any closure for anyone and that’s why it kept going on and on and on,” he said. “No one got satisfactory answers to why it happened. And there was no sense of justice.”

‘It wasn’t going away’

It has taken the university decades to come to grips with its dark place in history.

“The university, after years of hoping May 4 would just go away, and then…literally burying it (with the construction of a gymnasium annex in 1978 that altered the landscape), finally came to terms with the fact that it was history,” Di Paolo said. “And of course that comes with the passing of time.

“And finally you had presidents – Lester Lefton (who left in 2014) was one, his successor (Beverly) Warren was another, who finally understood it wasn’t going away and that remembering the tragedy is not celebrating it.”

But Di Paolo says that after every May 4 commemoration, when he would play coverage on the front page of his newspaper, he would invariably get the calls the next day from some readers, the same ones many of us who covered this story have gotten over the years.

“ ‘Why are you glorifying this? Why don’t you let it die and go away?’ And, ‘They should have shot all of them’,” Di Paolo said. “They’re still around, they’re just a lot older. Those people aren’t ever going to change.”

Kahler agrees the university has made strides in confronting its history. The administration has opened its doors to the victims and parents. The visitors center lays the story out and the May 4 history is taught in various parts of the curriculum.

“But there is still more healing that needs to be done,” Kahler said. “You know, we’re only 50 years away from it, so the true understanding of it is still in its infancy.”

The 50th anniversary commemoration events, which were to feature a speech by Jane Fonda, were canceled due to the coronavirus pandemic and will be reduced to a virtual ceremony online. Kahler was set along with Tom Grace, another wounded student, to deliver the commencement address on May 9, but that also was canceled.

His message to graduates:

For his part, Kahler has long since made peace with his place as a living symbol of a tragic historical event

“I’m an old man now, but I keep it in the same context that I’ve kept it in for all these past 50 years. It was one bad day in my life, that changed my life,” he says. “I’m very thankful that I’m alive and that I could go on and be a productive human being and a member of society in a positive way.

“I look at it as a historical thing, but I don’t make it the focus of my life.”