Dora Chance, the widow of Owin Chance, sits in the front pew for his funeral service on May 8 in Wildwood. (MARTHA ASENCIO RHINE/Times/TNS)
May 24, 2020 Ileana Najarro - Tampa Bay Times
Share
Tweet
Flip

Owin Chance had his funeral all planned out.

The retired U.S. Navy chief petty officer — a Korean and Vietnam war veteran from Wildwood — wanted the full military honors he had earned. The bugle playing Taps, the rifle team, the ceremonial presentation of the flag and the words of gratitude for his service of 23 years and four days as he was buried at Florida National Cemetery in Bushnell.

“Everything was planned,” said his wife, Dora Chance, 88.

Everything except a global pandemic. 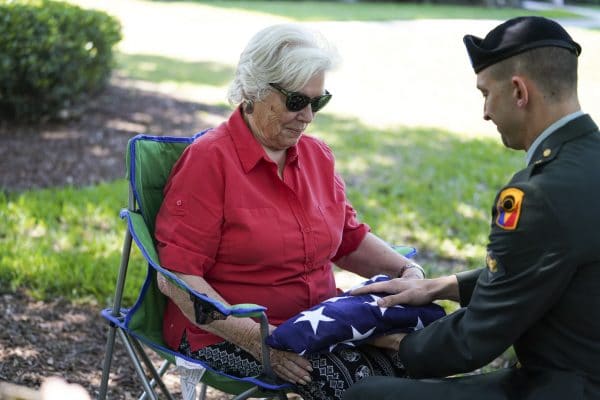 Eric Cahill of Veterans Funeral Care presents a flag to Donna Marie Sherf, the widow of Navy veteran Walter William Sherf, on May 11 in St. Petersburg. He died last month. Due to the coronavirus, more traditional funeral proceedings were not possible.
(MARTHA ASENCIO RHINE/Times/TNS)

The National Cemetery Administration, part of the Department of Veterans Affairs, decided on March 23 to postpone traditional military funeral honors as a safety measure against the spread of COVID-19. The directive applies to all veterans whose families request the honors, not just those who died from the virus.

Chance, 87, died on May 4 due to natural causes not related to the virus, but his family will have to wait for his posthumous honors.

Every veteran with an honorable discharge is eligible for military honors, said Jim Rudolph, founder and president of Veterans Funeral Care in Clearwater. 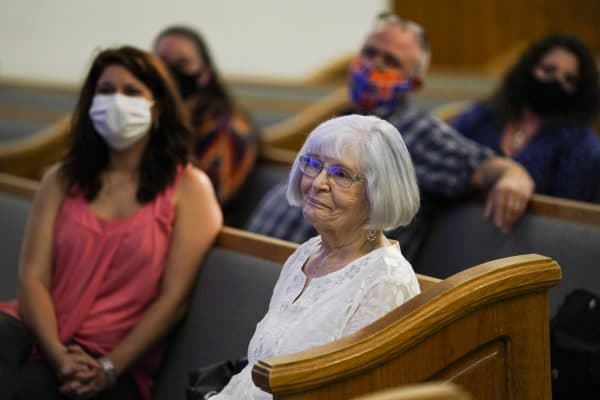 Dora Chance, the widow of Owin Chance, is pictured among a small group of family and friends during her husband’s funeral on May 8 in Wildwood. Chance was a Navy veteran but due to the pandemic the family was not able to give him full military honor.
(MARTHA ASENCIO RHINE/Times/TNS)

His funeral home, which caters exclusively to veterans and their families, routinely arranges honor guards for their services — a volunteer guard for those with fewer than 20 years of service and an active-duty guard for retired service members.

The directive over national cemeteries has created a backlog of honors to be rendered once restrictions are lifted. Because of that, the Department of Veterans Affairs has created an online Roll of Honor naming veterans interred nationwide beginning April 13.

Interments continue at the cemeteries, but without the full ceremony. Family members can watch from their cars or from the roadside near their cars. Most are gathering in small groups of 10 or fewer people, Rudolph added.

Between March 23 and May 14, 265 veterans were buried at Florida National Cemetery, according to executive director Tony Thomas. Owin Chance was buried there on May 11.

The directive has changed the dynamic at cemeteries like Florida National, Thomas said.

Families still can visit their loved ones’ graves after the burial. As many as 2,000 to 3,000 visitors a day have been coming in recent weeks, Thomas said.

But for some families, everything’s on hold until the pandemic is over.

Charles Reid Dennis, a retired U.S. Marine Corps captain from St. Petersburg, died on April 4 at the age of 79. His loved ones chose not to have him interred until his whole family and fellow Marines can gather for the rendering of his funeral honors at Bay Pines National Cemetery.

He lost his right leg in an explosion while serving in the Vietnam War. If he hadn’t been medically retired after that, his wife is sure he would have kept serving.

“Semper fidelis was his motto in life,” said Dorothy Dennis, 65. Always faithful. “He was a proud American, a proud Marine, the ultimate sports fan and a naturally witty, funny and captivating man.”

He went on to work at publications like the Caymanian Weekly and later opened Durty Reid’s Bar and Grill on Grand Cayman island.

“He was never a stranger in the room,” Dorothy Dennis said. He made friends everywhere he went.

With their daughter stuck abroad due to COVID-19 travel restrictions and the funeral on hold, she said the family feels like it’s left hanging.

“There’s an open wound left because we’re not able to commemorate his life as a family and friends,” she said.

He didn’t talk much about his service, his wife said, but he was thankful that it provided him an education.

The flag presentation in the butterfly garden of her condo building was performed by Eric Cahill, one of the funeral directors at Veterans Funeral Care and also a veteran. It was comforting, quiet and serene, she said.

Her husband was a caring person, she said. He didn’t come from much and felt he had a charmed life. The last time she saw him was in February, before his long-term care facility closed to visitors because of the pandemic.

His interment will wait until she dies. They committed to having their ashes joined into a wreath that will be taken out into the ocean.

The family of Owin Chance hosted a memorial service on May 8 at First Baptist Church of Wildwood, where he served as a deacon. An American flag draped his open casket as a handful of loved ones spoke about him.

His wife said the Navy raised him. He was 17 when he joined.

She’ll remember how theirs was a love at first sight. How they did everything together, including running Western Auto in Wildwood for 15 years and later traveling the world.

“He expected to and always made sure that he thanked everyone,” Dora Chance said. She looks forward to a time when the nation can offer its ceremonial thanks to him for his service.