Coronavirus chokes the drug trade — from Wuhan, through Mexico and onto US streets

Tablets suspected to be fentanyl are placed on a graph to measure their size at the Drug Enforcement Administration Northeast Regional Laboratory on October 8, 2019 in New York, New York. (Photo by DON EMMERT/AFP via Getty Images/TNS)
May 02, 2020 Kate Linthicum - Los Angeles Times
Share
Tweet
Flip

For drug traffickers interested in getting in on the fentanyl business, all roads once led to Wuhan.

The sprawling industrial city built along the Yangtze River in east-central China is known for its production of chemicals, including the ingredients needed to cook fentanyl and other powerful synthetic opioids.

Vendors there shipped huge quantities around the world. The biggest customers were Mexican drug cartels, which have embraced fentanyl in recent years because it is cheaper and easier to produce than heroin.

But the novel coronavirus that emerged in Wuhan late last year before spreading across the planet has upended the fentanyl supply chain, causing a ripple effect that has cut into the profits of Mexican traffickers and driven up street drug prices across the United States. 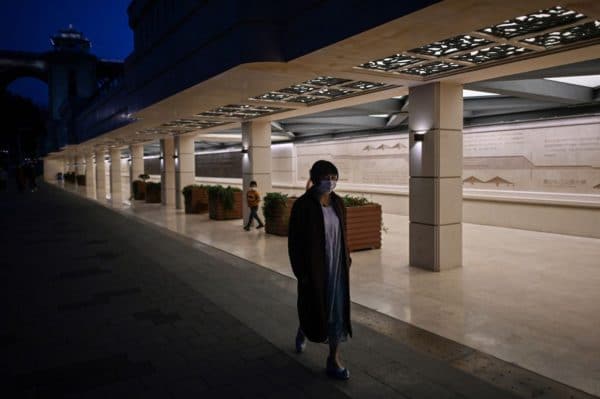 A woman wearing a facemask walks along a street near to Wuhan Bridge in Wuhan, in China’s central Hubei province on April 13, 2020. (Photo by HECTOR RETAMAL/AFP via Getty Images/TNS)

Few industries — illicit or not — have been unscathed by the pandemic that has upended the global economy and killed more than 190,000 people worldwide.

The narcotics trade, which relies on the constant movement of goods and people, has been stymied by lockdowns, travel bans and other efforts to contain the virus, according to government officials, academic researchers and drug traffickers.

Both drugs are made with precursor chemicals that are typically sent on planes or cargo ships from China, where despite U.S. pressure to ban them, they continue to be sold legally.

That supply chain was shut down in January when authorities in Wuhan enacted a lockdown that forced residents to stay inside for more than two months.

In February, after a major manufacturer of the chemicals closed, vendors began posting apologies on the online sites where chemicals are typically sold, said Louise Shelley, a professor at George Mason University who tracks global fentanyl production.

“They were saying: ‘We’re not producing or selling or shipping,’” she said.

Logan Pauley, a researcher at C4ADS, a Washington-based think tank focused on transnational security, also noticed a decrease in advertisements for fentanyl precursors. He said vendors switched to selling other products, including face masks and anti-malarial drugs that some doctors and politicians initially hoped would help treat the coronavirus.

The drop in exports has left some Mexican drug producers with less access to needed chemicals.

Simultaneously, cartels have encountered another colossal challenge: new restrictions on entry to the United States — the world’s biggest market for illegal drugs.

Normally, more than a million people cross the U.S.-Mexico border legally each day. But that number has fallen significantly since March, when President Trump closed the border to all nonessential traffic, reducing opportunities for cartels to smuggle drugs north.

Some cartels are hurting financially, said Falko Ernst, a senior analyst at the International Crisis Group. He said he has interviewed gang members who complain that cartel bosses have not paid their salaries.

“They’re being told that business is bad, that finances aren’t flowing smoothly,” he said.

Other factors are also hurting organized crime. Experts say quarantines have slowed the movement of cocaine from South America to Mexico and harmed legal industries, such as the avocado trade, from which cartels extort money. Meanwhile, the downturn of global oil prices has been a blow to gangs that resell stolen gasoline.

That loss of income could be exacerbating violence in Mexico, which saw 2,585 homicides in March, more than in any month in nearly two years.

In the United States, reduced drug production and less trafficking across the border appear to have resulted in rising retail prices.

Kameron Korte, a spokeswoman for the San Diego field division of the U.S. Drug Enforcement Agency, said fentanyl pills in her region now sell for $7 each, up from $5 a few months ago.

Similar price hikes have been seen in other parts of the country.

Drug users have grumbled about rising prices on online forums. On a message board on the website Reddit, one person complained that prices of fentanyl pills in Phoenix had nearly doubled. “Border shut = less trafficking,” it said.

Despite that, drug treatment experts say they are seeing a surge in drug use.

Jeffrey Holland, who runs a nonprofit rehabilitation facility in Albuquerque, said anxiety about the pandemic and the economic recession is a potent trigger. It doesn’t help that Narcotics Anonymous meetings and other recovery programs have been moved online, he said.

“This is cultural trauma on a global scale,” he said. “And when people have more anxiety, they turn to alcohol and drugs.”

The country’s opioid crisis began more than a decade ago with prescription painkillers and heroin, but in recent years it has been dominated by fentanyl.

In 2018, more than 31,000 people in the United States died after taking fentanyl or one of its close chemical relatives, according to the U.S. Centers for Disease Control and Prevention. No other drug in modern history has killed more people in a year.

Holland said he’s seen no sign of a slowdown in New Mexico during the pandemic.

“Drug dealers are still driving around, and they’re still selling from their houses,” he said.

Jaime López-Aranda, a Mexican security analyst, said that drug traffickers are accustomed to disruptions in the supply chain and that they would bounce back from the pandemic the same way they rebound from cartel infighting or law enforcement crackdowns.

“It’s part of the business cycle,” he said. “This has never been a stable market. The rule is strife and conflict.”

In Mexico, there has been some evidence that cartels have been trying to adapt.

Miguel Angel Vega, a journalist and expert on the Sinaloa cartel, said multiple drug producers have told him of efforts — so far unsuccessful — to manufacture the precursor drugs needed to make fentanyl and methamphetamine in Mexico.

Wuhan ended its 76-day lockdown on April 8, and many of the city’s 11 million residents have returned to work. According to Shelley, some online websites have already resumed selling fentanyl ingredients.

Ben Westhoff, who traveled to Wuhan in 2018 while researching the opioid trade for his book “Fentanyl, Inc.,” said it’s likely that Mexican cartels are already designing more resilient supply chains.

The only reason they relied on Chinese manufacturers for precursor chemicals in the past was because it was easy, he said.

“The reason they buy these ingredients from China is the reason everybody buys things from China: because it’s cheap.”