Then President George W. Bush greets sailors on the flight deck after a successful trap aboard the USS Abraham Lincoln (CVN 72) in a S-3B Viking assigned to the Blue Wolves of Sea Control Squadron Three Five (VS-35) designated "Navy One". The author of this article is pictured in yellow behind Bush's left shoulder, to the right of him in the picture. (U.S. Navy photo by Photographer's Mate 3rd Class Lewis Hunsaker/Released)
May 23, 2020 J. Morgan
Share
Tweet
Flip

Who remembers President George W. Bush’s “Mission Accomplished” speech from the deck of the USS Abraham Lincoln aircraft carrier? Well, I was right there when it happened and I got to play an interesting part in that day in history. Here’s what it was like.

There I was, more than 2,300 miles from home riding 97,000 tons of American steel, eastward from Hawaii to San Diego on the USS Abraham Lincoln aircraft carrier, where I had spent the last several months launching and recovering Airwing 14 Aircraft. It began as an ordinary six-month deployment, which then turned into a nine-month cruise that only weeks before launched “Shock and Awe” over Iraq from its flight deck.

As a toddler playing in a sandbox in San Antonio in 1968, if someone had asked me where I wanted to be when I grew up, being a slightly-used EA-6B Electronic Countermeasures Officer (ECMO), now paying his debt to society as a “shooter” on an aircraft carrier deck would have been about the last thing that could have come to mind. But then, isn’t that what being four years old is all about?

When I was an aviator, earlier in my career, I enjoyed the “sleep till you’re hungry, and eat till you’re tired” lifestyle of a fly-boy. I used to look at those poor bastards who spent all day on the flight deck, known as “shooters,” who always stepped up under the most demanding conditions, especially the Persian Gulf in the summer. I was always in awe, that those guys always seemed to have a smile on their face, and a great attitude despite what I learned first hand was usually a seventeen-to-eighteen-hour day “at the office.” A day at the office can begin at 0430 with firing “no-loads”– a “pre-flight” of the catapult systems – to crawling off the flight deck after the last recovery of the day, many times well after midnight.

This cruise was hardly typical, but that meant we also saw a number of firsts, including the first wartime use of the new F/A-18 E and F model “Super Hornets” and the first use of the new GPS-guided Joint Defense Air Munition (JDAM) smart bombs among others. I helped launch the very first aircraft off the bow on CAT 1 into combat as the air war over Iraq began. I woke up hours earlier that morning to watch the “small boys” – our guided-missile destroyers – launch several volleys of Tomahawk Land Attack Missiles (TLAMs).

The AIRWING 14/USS Lincoln team performed flawlessly during our deployment, and I personally logged more than 1,000 total launches as the shooter of record during my tour on that cruise.

By this point we were headed home to Everett, Wash., by way of Hawaii, then San Diego. The trip home was interesting, as a hangar bay full of Christmas presents was finally catching up to us, in late April!  There were a lot of cameras and media personalities, and lots of coverage leading up to an event that marked another first, which was the arrival of “Navy One”, an S-3 Viking from VS-35, carrying President George W. Bush to our humble little city on the water on May 1, 2003.

(I’m the guy in the yellow shirt, standing behind the guy in green, to the left of Bush at the 9:10 mark)

After the President landed, he walked away from Navy One and went through a “rainbow” of greeters, lined up facing each other, and who represented all of the colors familiar on a flight deck. As a shooter, I wore a yellow shirt.

After Bush shook hands with Capt. Kendal Card, and the Admiral, he turned left and started walking toward us shooters. It sort of dawned on me that I was about to shake his hand. It was almost a carnival atmosphere, as business as usual was done, and we were headed home for a “victory lap.” 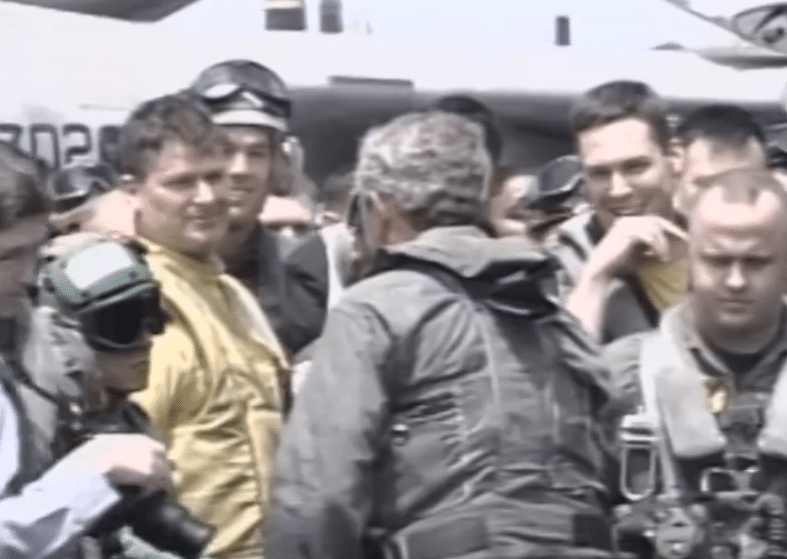 Then President George W. Bush greets sailors on the flight deck after a successful trap aboard the USS Abraham Lincoln (CVN 72) in a S-3B Viking assigned to the Blue Wolves of Sea Control Squadron Three Five (VS-35) designated “Navy One”. The author of this article is pictured in yellow shaking Bush’s hand (Screenshot, C-Span)

A banner came with Bush that read “Mission Accomplished”, and though we were all thrilled by the message from President Bush delivered there in front of us, the war in Iraq was far from over. Mostly we were happy to be returning home after nearly 10 months at sea.

What most folks don’t realize about carrier cruises, is that we send all of those aircraft back to their respective home bases several days before we pull into home port. It’s a festive time for shooters and includes the tradition of launching your boots as your final touch of the deck, dressing up as Elvis, or even shooting after doing a dance that resembles something that Rockettes would do in New York City. We five happy shooters from the Air Department of the USS Lincoln were all taking turns launching from our four catapults, and then it happened.

Bush left by helicopter after his “Mission Accomplished” speech but we had the role of launching Navy One back off the deck the next day. As we took turns shooting the planes, I saw Navy One in the lineup. I jumped for the opportunity when I saw it was loaded up on Cat-3, right in front of me. I couldn’t stop grinning as I gave the pilot the command to throttle up just after going into tension and I realized I was about to become the first and only shooter ever to launch Navy One from the deck of an aircraft carrier. Now, Navy One sits in the National Naval Aviation Museum in Pensacola, Fla.

I elected NOT to shoot my boots because I wanted this historical “cat shot” to be my last, and it was. It’s hard to believe that all happened 17 years ago, it seems like a lifetime ago now, but its one of my many happy memories of an exciting, and accidental career in Naval Aviation.

If someday a Navy One shoot should happen again, I can still say that I was the first, but for now, I just say I’m the only shooter to have done so.

J. Morgan commissioned as a 2nd Lieutenant in the Marine Corps in 1989 and served as an Electronic Countermeasures Officer for the EA6B Prowler. He did an interservice transfer to the Navy in 1996. Over the course of his 20 year military career he served with VMAQ-4, VAQ-141, VAQ-128, and VAQ-136 in Japan and served with Forward Deployed Naval Forces. He eventually retired from the Prowler program office at Naval Air Station Patuxent River, Maryland. He is currently living in Tucson, Arizona. He is the proud father of two sons: the eldest a United States Marine, the youngest a reporter for American Military News.