Daytona Beach police sergeant Tim Ehrenkaufer flies a drone Tuesday equipped with a camera and a intercom system that allows officers to speak to someone without getting physically close to them. [News-Journal/David Tucker/TNS]
April 08, 2020 Patricio G. Balona - The News Journal
Share
Tweet
Flip

A drone soon will be screening visitors to the Daytona Beach Police Department, checking to see if they have a fever as efforts continue to combat COVID-19, officials said on Tuesday.

Others will fly around the city, watching for groups and warning them about the coronavirus.

The drone that can check for fevers, which was bought with seized drug money at a cost of $26,000, is equipped with a digital camera and a heat detecting device, FLIR (Forward Looking Infrared). The machine will be placed for now in the lobby of the police department, said police Sgt. Tim Ehrenkaufer, who heads the department’s Unmanned Aviation Systems Unit.

The drone equipped with FLIR will be able to read people’s temperatures from a distance of 300 to 400 feet, said Messod Bendayan, police spokesman.

Using shades of color, the drone with FLIR can pick out a person with fever in a crowd, the sergeant said.

“If I zoom in on a crowd of people and somebody in there had a … everybody was 98.6 degrees, or whatever the new normal is 97, and somebody has a 102 fever, he would be red in a crowd of orange people,” Ehrenfauker said.

This would alert police and first responders to make sure to take extra precautions and have the extra equipment needed to handle the situation, the sergeant said. 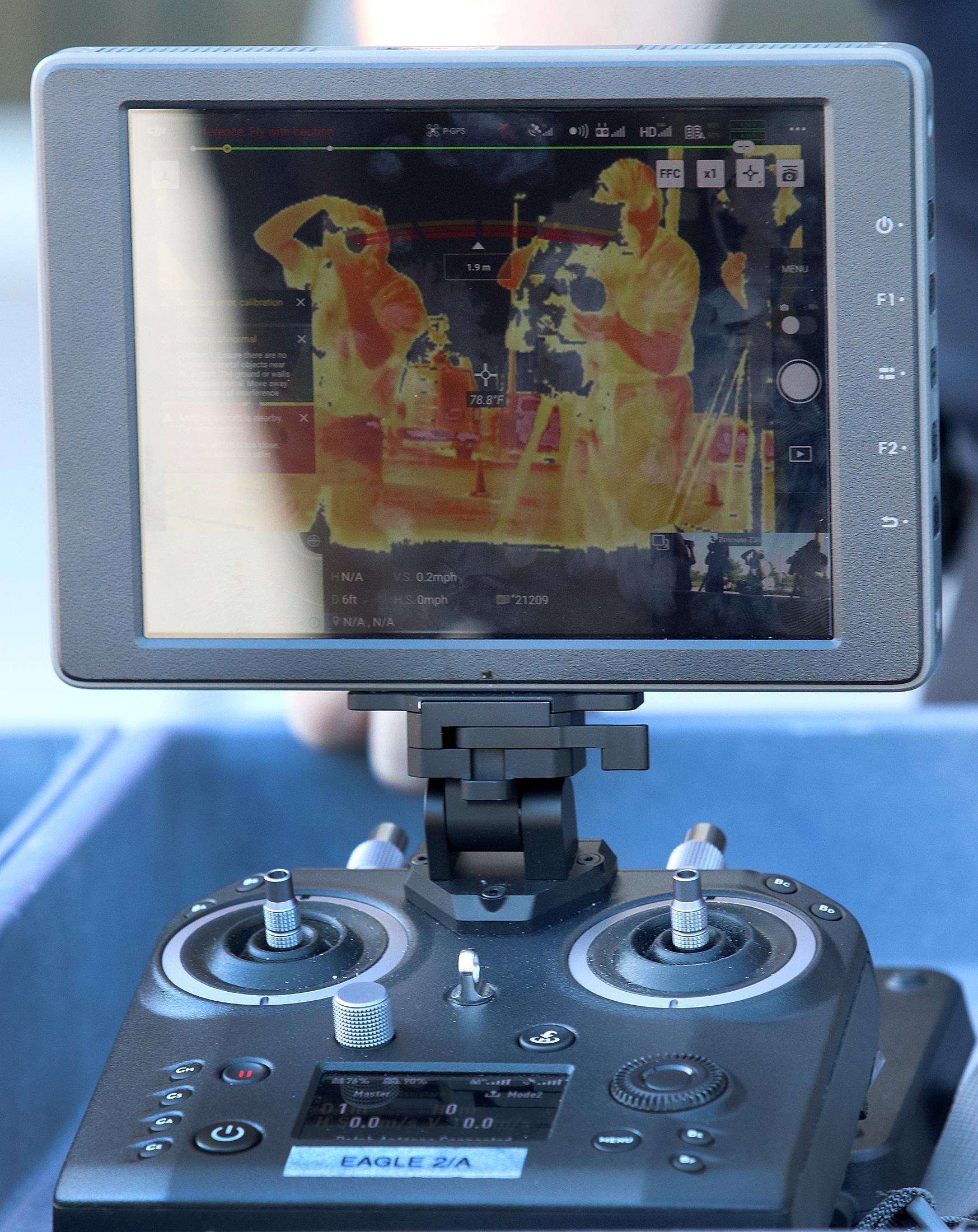 One of the drones in use by Daytona Beach police can take thermal images. Here photographers’ images are shown during a demonstration Tuesday. [News-Journal/David Tucker/TNS]

The drone also has the capability of dropping off medication, gloves, or a cellphone in a hostage situation — places that may not be easily or safely accessed by police officers, officials aid.

The heat-detecting drone is one of two types Daytona police are now using to aid in preventing the spread of the coronavirus.

The department also has two Mavic 2 Enterprise model drones that will leave the office. Each valued at $3,000, they’re on loan from DJI Enterprise, a China-headquartered drone manufacturing company with operations in California. The equipment agreement is under the manufacturer’s U.S. Disaster Relief Program, Bendayan said.

The drones come with a speaker, a spotlight, a strobe light and battery, Ehrenkaufer said. They will be deployed to inform people who may be out in violation of Gov. Ron DeSantis’ Safer-At-Home order, Ehrenkaufer said.

With more than 30 missions flown over closed parks and city properties over the last weekend, police have discovered that people have been compliant with the drone’s announcements, Ehrenkaufer said.

“We’re flying them over, making the announcement. They look up at the drone, startled for a second that they are hearing somebody from the air talking to them, they then wave to it, leave the property and every thing is good,” Ehrenkaufer said. “(Police have seen) not just compliance but nobody seems to be upset with it either.”

In the wake of coronavirus, the drone program will be a key tool, Ehrenkaufer said.

“I think its really important right now because we are starting to run into situations where we can only do so much without having to come face to face with people that may or may not have the virus,” the sergeant said. “In terms of keeping officers safe, I think it’s very important.”