Pics: A look inside the Army field hospital at CenturyLink Field, designed to help medical centers swamped by coronavirus patients

Inside the cavernous CenturyLink Field Event Center, an exhibition space that would normally play host to home, RV and dog shows, hundreds of U.S. Army soldiers are hustling to erect an emergency, 250-bed field hospital to handle a potential overflow of non-COVID-19 patients from area medical centers that could soon be overwhelmed amid the novel coronavirus pandemic.

The facility, which will include intensive care beds, surgical services, a pharmacy, laboratory and radiological unit, is expected to be up and running within days, though it’s uncertain when any patients will arrive. 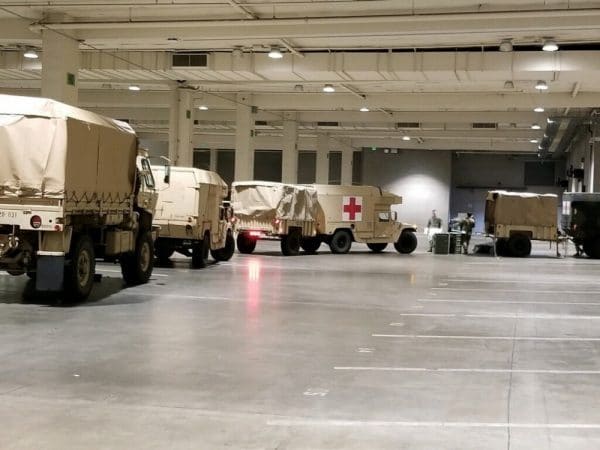 On Wednesday, U.S. Army Chief of Staff Gen. James McConville flew in for an inspection, walking the hall and getting updates from officers building out the hospital. Last week, when Gov. Jay Inslee and other local officials visited the site, it was virtually empty. By the time McConville showed up, dozens of evenly spaced beds were lined up next to portable oxygen tanks and medical sensors, and convoys of heavy Army trucks were delivering cargo containers full of supplies to the 200,000-square-foot facility.

While the military has stepped in before to boost medical care for cities and states after major hurricanes and wildfires, McConville said in an interview, “I’ve never quite seen the scope of this commitment in 39 years in the Army.” A second field hospital is going up on a soccer field in Shoreline, with two large tents each equipped to handle 70 patients recovering from COVID-19 who are unable to isolate themselves. 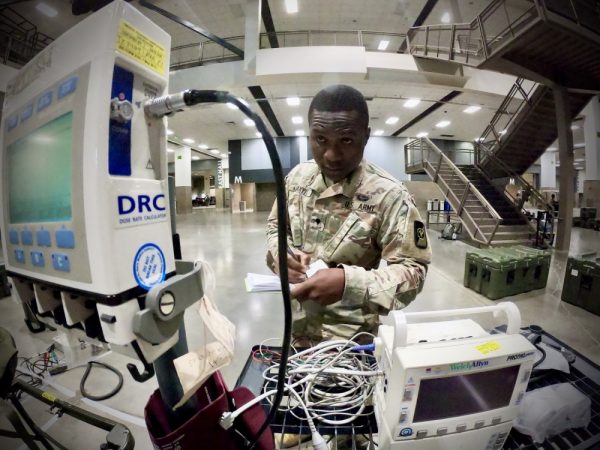 McConville said between 500 and 600 soldiers have been assigned to the Seattle hospital effort. They’re screened daily for coronavirus symptoms and are under orders to “shelter in place” at local hotels where they’re staying when not on duty. Units staffing the field hospital include the 62nd Medical Brigade out of Joint Base Lewis-McChord and the 627th Hospital Center and 10th Field Hospital, both based at Fort Carson, Colorado.

The burst of military help is arriving as the coronavirus has infected at least 5,984 people and killed 247 in Washington, according to the state Department of Health, as of 11:59 p.m. March 31. Federal officials now predict the pandemic could kill as many as 240,000 people in the U.S.

While state and health officials have acknowledged that social distancing measures have helped slow the spread of the novel coronavirus in Washington, Gov. Jay Inslee said Wednesday that it’s likely he’ll extend his stay-at-home order for at least the next 30 days. 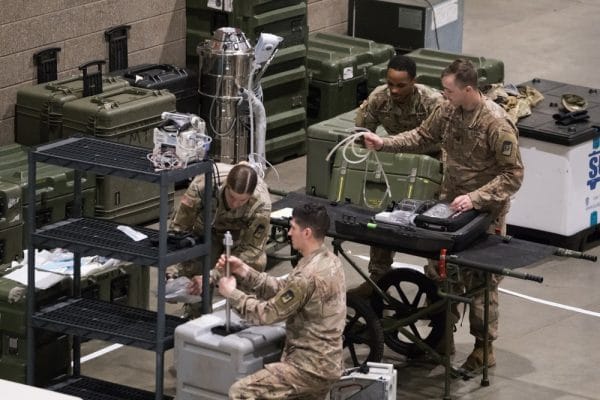 “We may have reduced the rate of increase of the disease and that is gratifying,” Inslee said in a news conference. “But … we don’t know if the virus will spring back up.”

Exactly when patients may be treated at the Seattle field hospital will depend on the intensity of the pandemic in the Seattle area in coming weeks. “It really depends on what happens. Ideally, I would hope in some ways that there would be no patients coming here because that means this situation is completely under control,” McConville said. “However, this is a contingency capability. It increases the capacity of the hospitals in the city, and that’s why it’s here.” 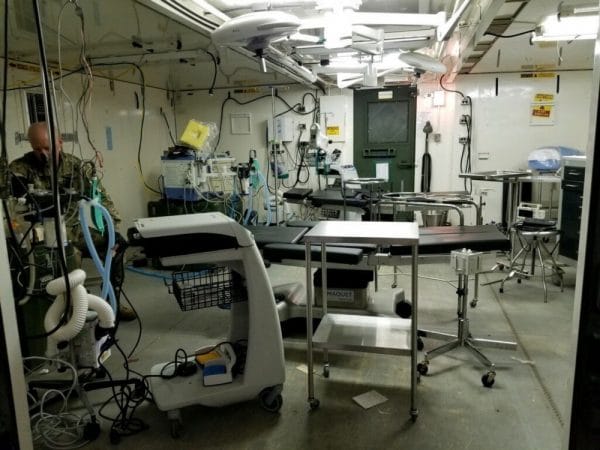 While the federal aid has been welcomed by Washington officials, a state hospital leader expressed concerns about the Seattle field hospital, saying it would be more helpful if it also accepted COVID-19 patients with milder symptoms, as well as people waiting for placement in long-term care facilities or nursing homes.

“We’re not sure that what they’re offering is what we need,” said Cassie Sauer, president and CEO of the Washington State Hospital Association. She said hospitals have enough capacity right now to deal with some of the non-COVID patients who may be accepted at the field hospital. Sauer said she hopes the federal government will reconsider its policy. 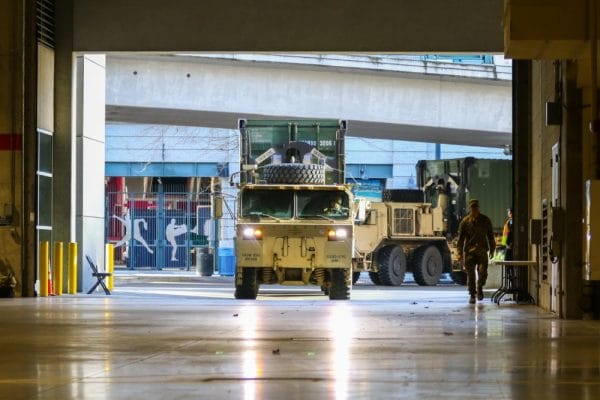 King and Snohomish counties have about 4,900 staffed hospital beds, including about 940 for critical care, and researchers had predicted that capacity could be quickly reached during the coronavirus pandemic. Some of Seattle’s largest hospitals were already near capacity before the outbreak. But Sauer said aggressive cancellations of elective surgeries and use of telemedicine have opened up beds and area hospitals were now running at closer to 70% capacity.

Greeting McConville at the event center was Col. Amal Chatila, commander of the 47th Combat Support Hospital at Joint Base Lewis-McChord. “Our medics want to be on the front lines. This is our job,” Chatila told the general before she and others led him on the tour.

As he walked through the event center, McConville and other soldiers accompanying him tried to maintain the physical separation recommended by public-health experts to slow the spread of the coronavirus. He also handed out commemorative red-and-white flag-shaped coins to soldiers briefing him — a military tradition by which top commanders recognize exemplary work on the spot.

“I came out to see our soldiers. I think what you see represents the best of America. You have state, you have local, you have federal officials and agencies in the United States military and National Guard, all working together, united in purpose to defeat this virus, which is threatening the United States,” McConville said.