As with anyone who gets near the USNS Mercy – the Navy hospital ship sent to free up Los Angeles area hospitals that need to take on an increase in coronavirus patients – the Navy’s top civilian leader had his temperature checked.

Acting Secretary of the Navy Thomas Modly made a surprise stop at the 1,000-bed Mercy docked at the Port of Los Angeles on Tuesday, March 31, taking a tour of the premises near the pier. 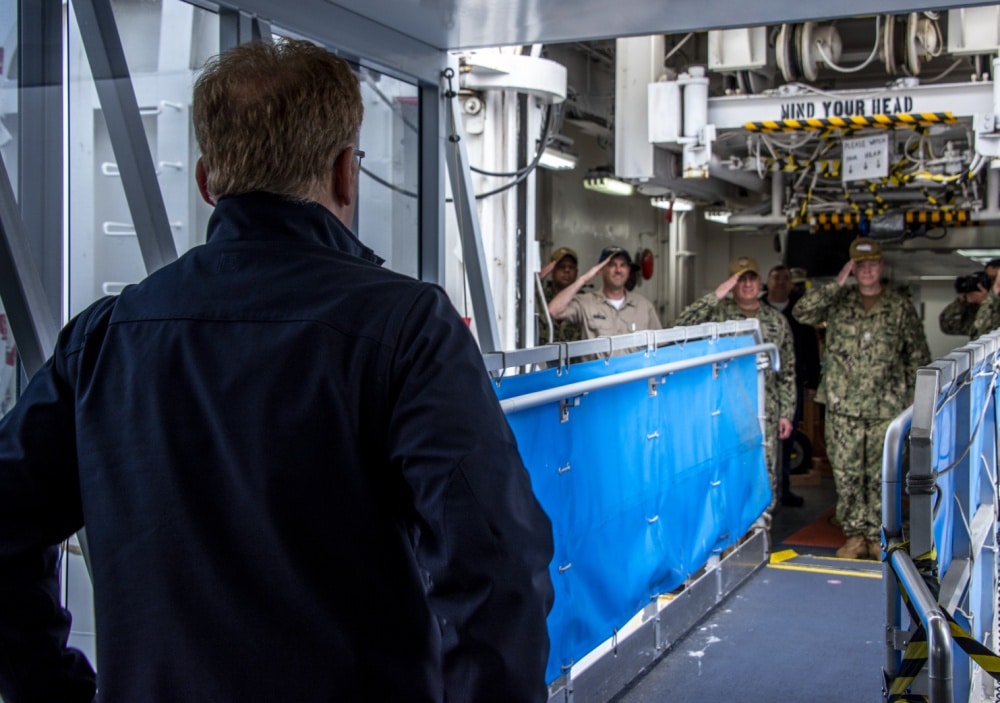 Acting Secretary of the Navy Thomas Modly US Navy/DVIDS)

He observed the transfer process used for taking non-COVID patients on board and spoke with Navy personnel about the ship’s mission. He also checked in on the security provided by Marines from Camp Pendleton’s 1st Battalion, 4th Marines; the Port of Los Angeles Police, the governor’s Office of Emergency Service; and the Navy. U.S. Coast Guard personnel are guarding the ship from the water.

The massive, 894-foot vessel arrived at the port on Friday, March 27, and is docked at the cruise terminal. Security is set up to watch the terminal, its parking lots and the ship’s perimeter.

“We have a couple of vehicle checkpoints where ambulances and delivery vehicles pass through,” said Marine Capt. Anthony Parenti, who is overseeing the Marines at the Mercy and is a platoon leader with the 1st Battalion, 4th Marines. “Due to this being a sensitive area, we’re making sure the right people have access.” 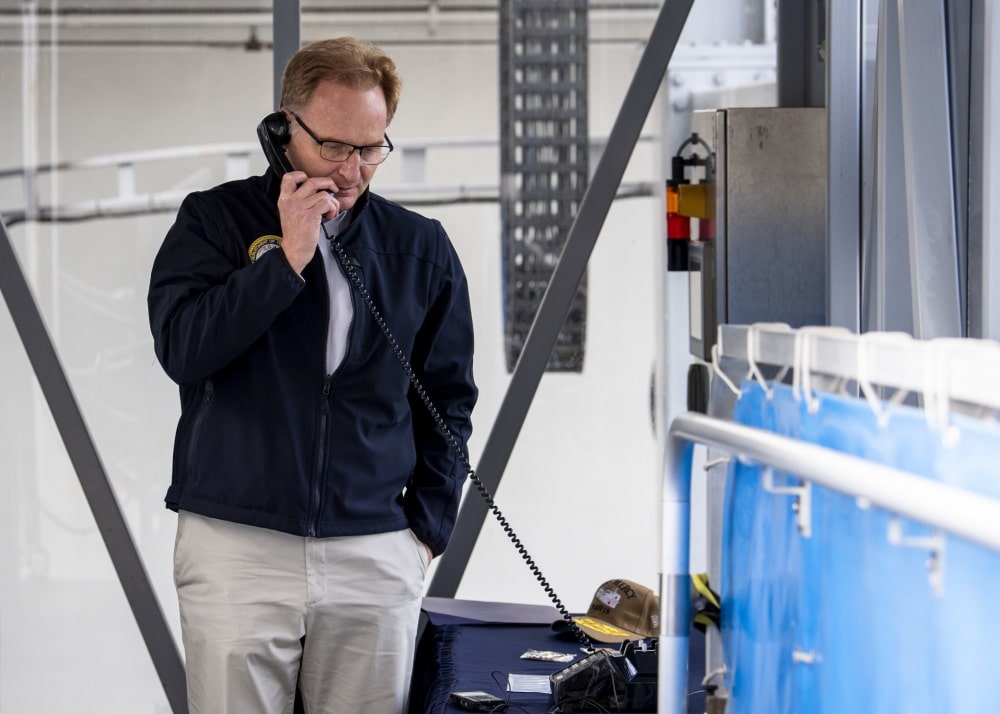 About 200 people, including medical personnel and terminal workers, pass through each day.

“This is the Navy and Marine Corps at its finest form,” Parenti said. “The Mercy has a unique mission, as do we. For the most part, the Marine Corps has helped serve the Navy for a long time. Whenever a Navy vessel is involved, there is always a security element to it.”

Modly did not step foot on the ship in accordance with strict measures in place to keep it as a “Covid-free bubble.” Instead, he waved to the crew from the dock and spoke with Navy personnel via phone. He thanked those aboard the Mercy for their hard work and dedication, and commended the speed in which they got the ship to Los Angeles.

“The white hull and red cross of this ship have been a welcome sight around the world, standing at the forefront of our humanitarian mission,” he said. “And now this great ship is serving our own people in this time of need, providing critical surge hospital capacity to the people of Los Angeles. This is just one of the many ways the Department of the Navy is responding to protect the American people in this time of need.” 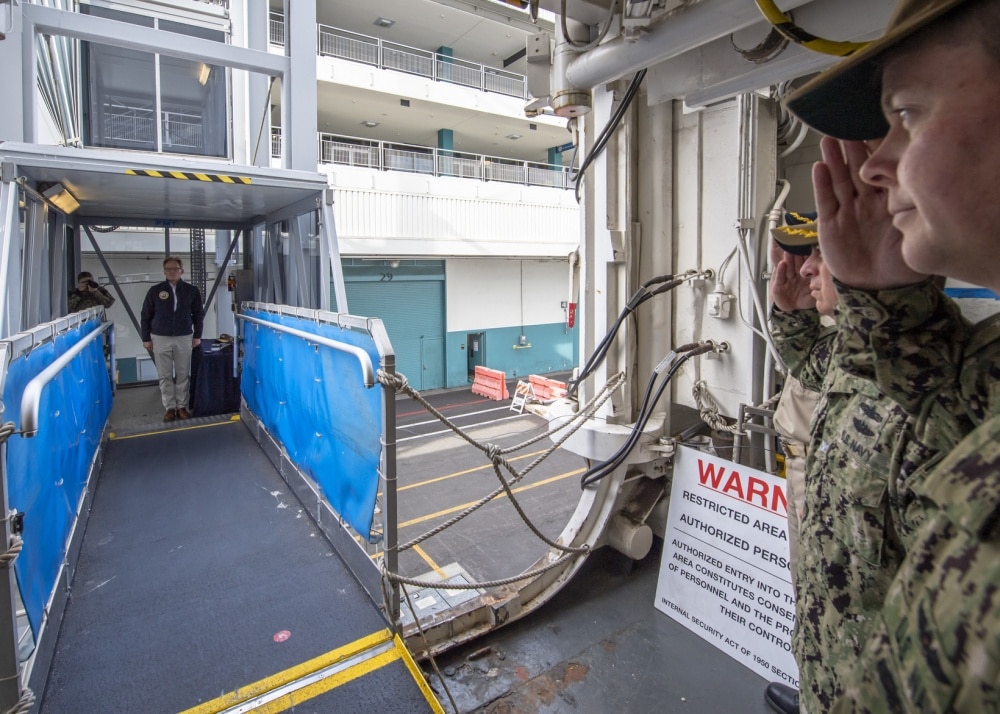 All of the 800 medical staff on board the Mercy and its 70 civil service mariners were screened for any health concerns prior to boarding the ship at Naval Base San Diego. They have not been allowed off since that time.

Parenti said his mission to provide security for the ship coincides with the military service he and his Marines signed up for.

“Anyone who signs up for military service, in any branch, is there to help at the end of the day,” he said. “We know the hospitals are getting filled up and we’re here helping local people. My role is to help relieve this pressure.”

The port’s executive director, Gene Seroka, said he, too, spoke with Modly during his brief visit and called the conversation “very productive.” 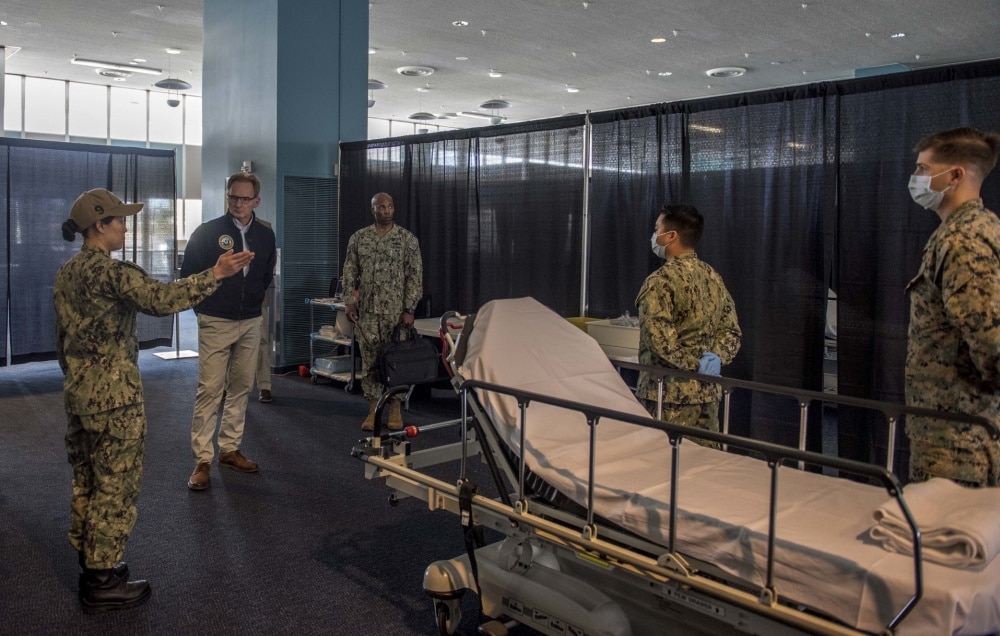