Army National Guardsman Colten Havelka PV2, left, and Zachary Balmes PFC, opens the back of a shipping container Monday, April, 13, 2020 that engineers and professors at Michigan Tech in the UP spent a week improvising a giant sanitizer to fight COVID-19. It is a 40-foot shipping container converted literally into an oven, using everyday materials to show how this could be done anywhere on the cheap. The National Guard hauled this 8-ton container to their armory in Taylor. Racks for placing PPE's can be seen along with duct work (at top) that will ultimately pump the heat through needed for sterilization. (Mandi Wright/Detroit Free Press/TNS)
April 15, 2020 Bill Laitner - Detroit Free Press
Share
Tweet
Flip

This would-be foe of COVID-19 is as big and homely as a semi-trailer.

It’s a giant makeshift oven, built by a university in Michigan’s Upper Peninsula, and it could be just what the doctor ordered in this pandemic — a way to decontaminate stacks of personal protection equipment that doctors and nurses must use over and over.

It could be equally important at police and fire stations because first responders are also scrambling nationwide for better protection from the deadly COVID-19 contagion. Last week, six members of the Michigan Army National Guard trucked the six-ton device from the U.P. to the National Guard armory in Taylor. Now they’re ready to help test it, the group’s leader Staff Sgt. Josh Towns said.

“If it does work, it’s going to be so easy to build more of these,” Towns said Monday as the five National Guard members in his command gathered at the jumbo oven. 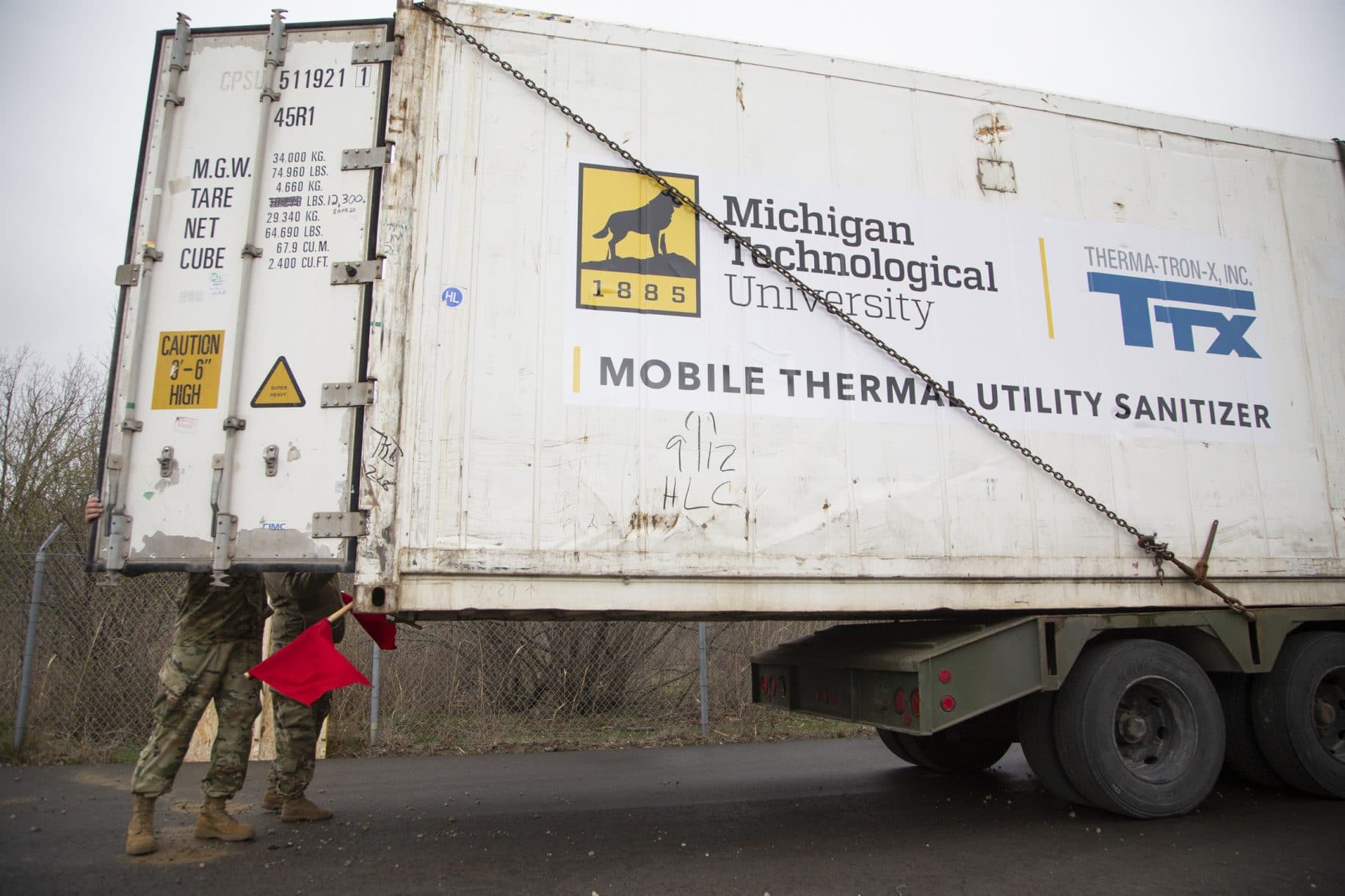 Engineers and professors at Michigan Tech in the UP spent a week improvising a giant sanitizer to fight COVID-19. It is a 40-foot shipping container converted literally into an oven, using everyday materials to show how this could be done anywhere on the cheap. The National Guard hauled this 8-ton container to their armory in Taylor. (Mandi Wright/Detroit Free Press/TNS)

That’s the ultimate goal – seeing this thing replicated around the country. The giant oven was pieced together for about $30,000, which is cheap when it comes to medical devices. Engineers used common materials, starting with a 40-foot shipping container. Their hope? To showcase a design that any hospital, anywhere in the country, could assemble quickly and on the cheap, then use to heat-cleanse big quantities of PPE, said Andrew Barnard at Michigan Technological University in Houghton.

“We’ve seen do-it-yourself versions using food dehydrators and kitchen ovens, but we wanted one much bigger,” because that’s what the COVID-19 crisis demands, Barnard said. 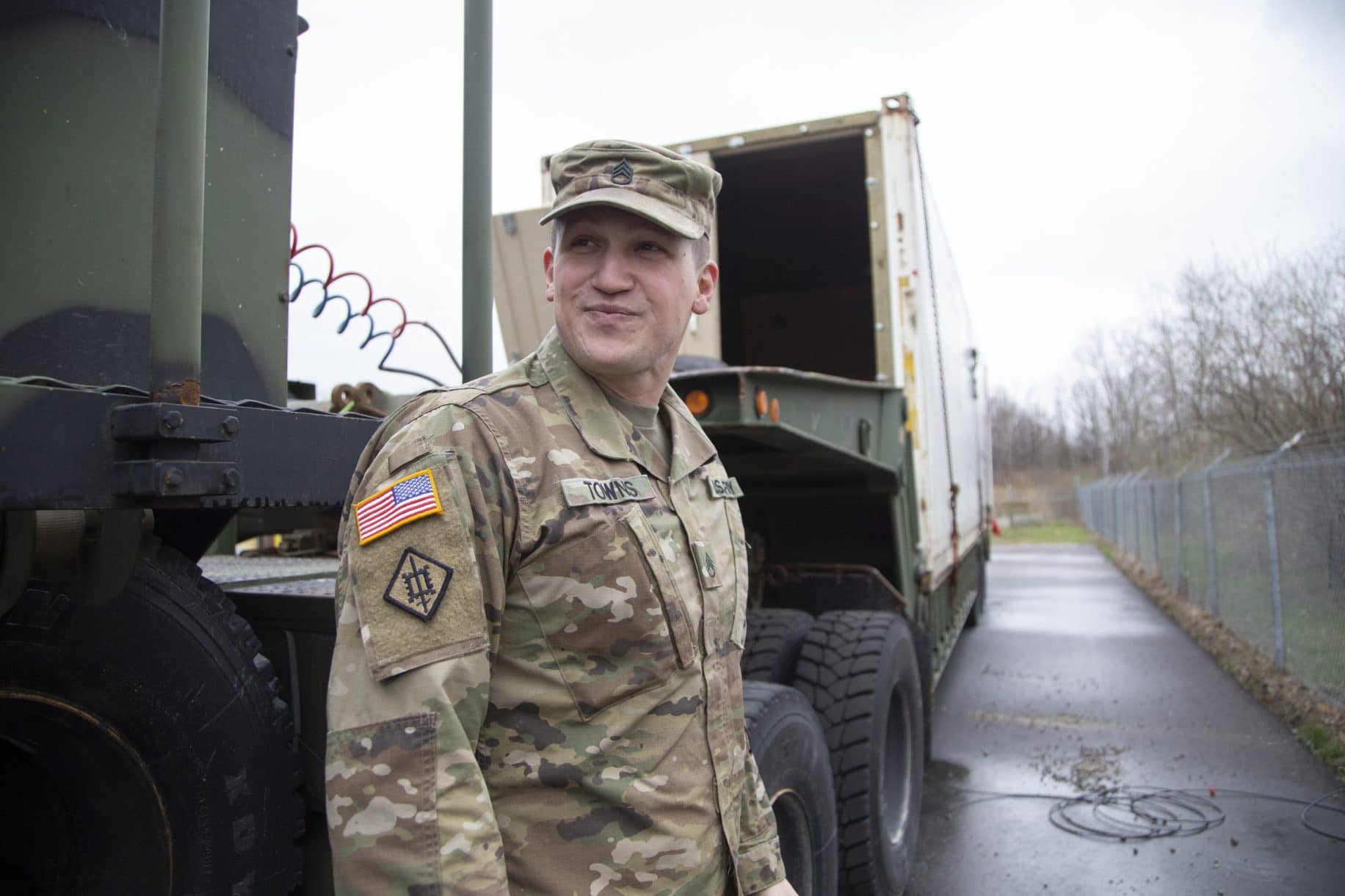 Staff Sgt. Josh Towns stands next to a shipping container engineers and professors at Michigan Tech in the UP spent a week improvising a giant sanitizer to fight COVID-19. It is a 40-foot shipping container converted literally into an oven, using everyday materials to show how this could be done anywhere on the cheap. The National Guard hauled this 8-ton container to their armory in Taylor. (Mandi Wright/Detroit Free Press/TNS)

“We built this and we’re offering it to the state of Michigan, for any use they see fit,” said Barnard, reached last week at the university, where he heads an in-house research center. He led a team of engineers that built the device in a week, then got help from the National Guard to haul it to metro Detroit for testing by a hospital.

This week, university officials are seeking a major hospital capable of giving the device exhaustive testing with live coronavirus germs. At the same time, the university is needing an “emergency use authorization” from the U.S. Food and Drug Administration, the federal agency charged with approving any new medical device. The FDA is notorious for taking three to seven years on average to approve medical devices, according to the ScienceDirect website of medical journals.

With the pandemic raging, “we’re hoping it’s a matter of days” to get a thumbs-up from Uncle Sam, Barnard said. After rushing to build the device, his university team trained the National Guard soldiers how to use it before they loaded it on an extra-long Army trailer.

They plan to stay with the device, called a sanitizer, and operate it during the testing process, then train health-care professionals how to use it, said Lt. Col. Lucas Lanczy, commander of the Army National Guard’s 107th Engineer Battalion in the U.P. Lanczy said the National Guard members jumped at the chance to help.

“It can take time to mobilize our soldiers because, as you know, we’re part-time. Our people all have regular jobs. But within 12 hours of being notified, these soldiers were on their way to Houghton,” he said.

The half-dozen soldiers, traveling in a convoy, carted the huge steel container 550 miles from the university campus, across the Mackinac Bridge and south to the armory on Beech Daly Road.

“They will stay with it, maintain it and move it wherever it’s needed,” Lanczy said. “Our mission is to develop the procedures for my soldiers to operate this safely.

“We see it as a new weapons system in our arsenal against COVID-19,” Lanczy said last week, in a phone call from his headquarters in Ishpeming. The National Guard members’ skills complement the unusual mission, he said. The group includes an electrician, a bio-hazards expert, a welder and several heavy-equipment operators.

News stories have focused on small protective equipment such as N95 face masks and plastic face shields. But protective equipment also includes bigger items such as doctors’ lab coats, nurses’ smocks, and patients’ hospital gowns. It also takes in firefighters’ bulky turnout gear, along with police jackets and pants. All need to be decontaminated if exposed to COVID-19 germs.

The university’s jumbo oven is designed to sterilize a jumbo load of such items in just a couple of hours, at 140 degrees or more, and it’s even able to accommodate EMS stretchers and hospital gurneys, according to Michigan Tech News.

When National Guard troops transported the heavy steel box, they had to leave behind the university’s power source. So they found a new source of portable power by calling on yet another branch of the military, said Lt. Col. Kathryn Prater, strategic planning officer for the Army National Guard in Michigan.

“We were able to support this mission with generators from the Michigan Air National Guard,” Prater said. Overall, “we’re excited to be using this opportunity to really be a part of this mission” to defeat the pandemic in Michigan, Prater said.

It’s a mission that sounds like a superhero action movie – “The Giant Decontaminator” – but the role awaiting this mega-oven is all too real. The goal is to save lives among the nation’s true superheroes. They’re the doctors, nurses and first responders who intentionally risk daily contact with the novel coronavirus.

Although no nationwide data has been released by the Centers for Disease Control and Prevention, or by medical groups and first-responders unions, it’s likely that hundreds of health-care workers and thousands of first responders nationwide have been infected with COVID-19, based on reports from scattered sites nationwide including Detroit. Some have died in metro Detroit, including at least one nurse, one medical doctor and several police officers.

Helping to connect the university researchers with the National Guard were state Sen. Adam Hollier, D-Detroit, and Rep. Greg Markkanen, R-Hancock, whose district includes the campus of MTU.

Hollier, a first lieutenant in the Army Reserve, hoped that the giant oven – officially, the MTU Sanitizer — can get tested, approved and put to work quickly in metro Detroit to “make a difference in this pandemic,” he said in the Michigan Tech News.