The FBI has recorded a record-breaking number of background checks required for for firearms purchases in the span of a single month, amid concerns about the spread of the coronavirus. 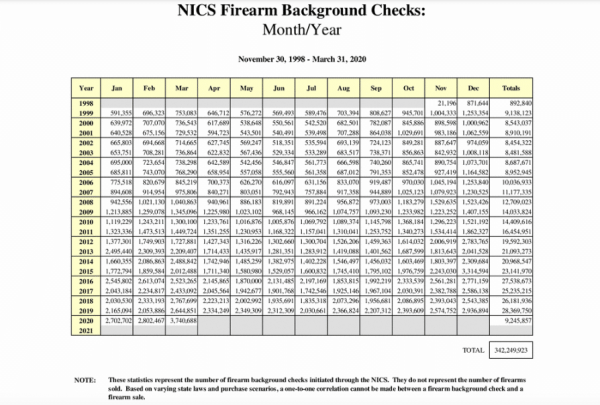 The FBI noted the numbers only represent the number of background checks requested, rather than the total number of firearms sold during the period of time.

After subtracting raw data regarding background checks for firearms permit requests and renewals, the National Shooting Sports Foundation (NSSF) calculated the number of background checks specifically for new firearms purchases at 2,375,525. The number represents a roughly 80 percent increase in background check requests directed for gun sales compared to the same month period in March of 2019.

The record breaking month began after the first recorded U.S. fatality from the coronavirus on Feb. 29 and saw continued spikes as many states declared closure orders affecting schools and businesses deemed non-essential.

Various state and local governments have debated how to classify firearms retailers during the coronavirus pandemic, with some declaring the businesses as essential, while others have called for their closure.

In California, various counties have taken differing stances on whether gun stores must close and California Gov. Gavin Newsom called on shooting ranges to close despite threats of lawsuits from gun rights advocates.

Some gun rights advocates have raised the record background check numbers as evidence of their views.

“This is overwhelming evidence that Americans value their ability to take responsibility for their own safety in times of uncertainty,” Mark Oliva, a spokesman for the NSFF said. “The figures are simply eye-popping.”

Meanwhile, gun-control activists have warned that adding a high number of firearms to populations of people largely stuck at home and stressed out about the virus could lead to an uptick in domestic violence and suicides.

“We need to prepare for the increased risk of more firearms in untrained hands,” said David Chipman, a senior policy adviser with the Giffords gun control group. “If you didn’t think you needed a gun prior to March of this year, you certainly don’t need to rush out and get one now.”