Massachusetts National Guard spokesman Don Veitch gets calls, emails and Facebook messages daily from people asking about the rumor. Other Guard officials tell him that they too heard about it.

It’s the same misinformation that has circulated since states started issuing state of emergency declarations and public safety advisories: that the federal government is mobilizing the National Guard to enforce a nationwide quarantine.

“We want you to know that this information is categorically false,” the Massachusetts National Guard wrote in a Facebook post. The rumors got so bad, that the Guard felt the need to publish a post dispelling it. 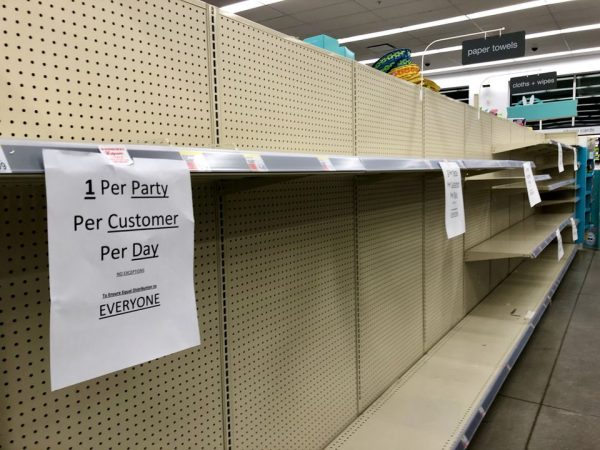 A Walgreens in Quincy limited customers to buying one item of toilet paper, paper towels and cleaning products per day.
(Steph Solis/TNS)

“I think the biggest issue is the call to action for stockpiling supplies. This may create a run on stores further impacting the availability of scarce goods,” Veitch told MassLive. “Additionally, this misinformation undermines the trust our citizens have in their National Guard.”

The Guard is activated by state leaders, not federal agencies. Baker issued an executive order last month activating up to 2,000 members of the Guard to help with the state’s COVID-19 response.

The Massachusetts National Guard, which has 8,200 members, has helped the state respond to the Merrimack Valley explosions, the 2015 winter storms and the Cape Cod tornadoes in 2019.

With the coronavirus response, the Guard has been tapped to help deliver protective gear to hospitals, set up testing sites, build field hospitals and offer logistical help.

By the time Baker called in the Guard, rumors about a possible nationwide quarantine had already circulated, sending people panic-shopping. Now stores across the country have signs up telling customers they can only buy one pack of toilet paper or cleaning product per day.

The Guard finds itself in the same position as public health officials across the country: reminding the public not to believe every rumor they see on the internet.

Gov. Charlie Baker has had to make similar appeals to the public after rumors about national quarantines and lockdowns circulated. The Republican governor reminded the public not to believe everything they hear from their friends or see on social media.

“There are many rumors and false information floating around out there,” he said last month. “Please remember to get your information from credible sources.”