As the use of facial recognition rises, so do privacy concerns. These Chicago-made glasses are designed to block the technology.

Scott Urban, who requested his face not be photographed, with a pair of Reflectacles glasses which prevent facial recognition, at his studio on Feb. 26, 2020, in Chicago. Urban began designing them in 2015 and they became available for purchase in 2017. He has several designs and accessories. (Stacey Wescott / Chicago Tribune/TNS)
April 25, 2020 Ally Marotti - Chicago Tribune
Share
Tweet
Flip

The chunky, thick-framed glasses Scott Urban makes in his Humboldt Park workshop look like normal eye glasses, but when viewed on a security camera, the wearer’s face becomes a shining orb.

Reflectacles, as the glasses are called, are among a growing number of devices developed to protect individual privacy as facial recognition technology becomes cheaper, faster and more commonplace.

The technology is increasingly used by law enforcement and touted by tech companies, in part because advancements in security cameras allow them to record higher-quality images. 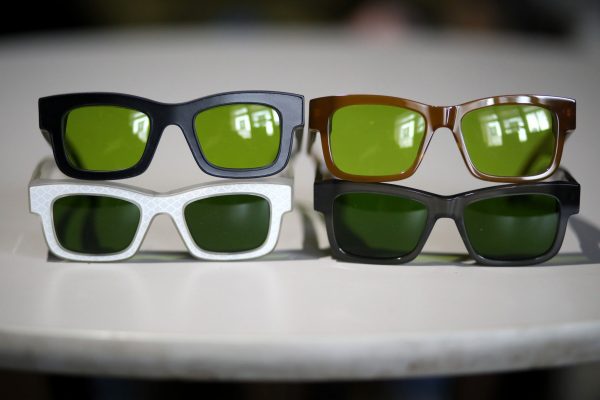 But privacy advocates say widespread use of facial recognition should be viewed with concern.

The technology collects data to create a map of someone’s face. Privacy advocates worry that mass use of facial recognition software, especially in public places, could erode personal privacy and be used to track people’s movements.

“How are we going to protect ourselves, protect our privacy when we leave our front door?” said Dave Maass, senior investigative researcher at the San Francisco-based digital rights nonprofit Electronic Frontier Foundation. ”How do we ensure that as all these technologies advance, our privacy and our personal movements are also protected?”

That’s where entrepreneurs are stepping in. Designers, artists and researchers around the world have invented masks that block facial recognition technology. There are also glasses that use different tactics than Reflectacles, and even clothing with faces on the fabric meant to confuse the cameras.

The efforts extend into other areas of data privacy as well — chunky bracelets meant to jam Amazon Echo and other devices from listening to conversations, and phone pouches that block tracking signals.

But recent uses of the tech have raised concern among policymakers and the public.

A New York company called Clearview AI is selling facial recognition tools to law enforcement agencies around the country — including in Illinois — that allows them to tap into a database of photos scraped from social media. The Chicago Police Department uses Clearview’s software to compare photographs of suspects against public information, according to department spokeswoman Maggie Huynh.

Sales of Amazon’s Ring doorbell, which allows users to livestream video of the area outside their front door, are surging, creating webs of cameras in neighborhoods.

A Clearview AI representative did not respond to requests for comment. Ring spokeswoman Che’von Lewis said in a statement that Ring does not use facial recognition, and that customer privacy and data security is “foundational” for the Amazon-owned company.

Still, Ring and Clearview AI have faced scrutiny over privacy and consent issues.

U.S. senators have probed Clearview AI, questioning its sharing of facial recognition technology with other countries and whether it could be used for mass surveillance. And in November, Sen. Edward J. Markey, D-Mass., released findings of an investigation into Ring that revealed “little to no privacy policies or civil rights protections for video collected by the technology.”

The concerns surrounding such uses of facial recognition are multi-fold. Some worry the technology has imperfections, and its use could result in misidentification. For others, the main issue is lack of consent.

Illinois has one of the strictest laws in the nation protecting biometric data, which can include data from facial, fingerprint and iris scans. The 2008 law mandates that companies collecting such information obtain prior consent from consumers, detail how they’ll use it and specify how long the information will be kept. The law also allows private citizens, rather than just governmental entities, to file lawsuits over the issue.

Tech giants and other companies have had to contend with the law. Earlier this year, Facebook ended a yearslong legal battle when it agreed to pay $550 million to Illinois customers to settle allegations that its facial tagging feature violated their privacy rights.

“Everybody just doesn’t like the erosion of privacy and there’s no form of consent … it’s just being used on them,” he said. “What I’m trying to do is give people the (option to) opt out.”

Reflectacles products, which range from $48 clip-on lenses to $164 glasses, use different methods to block facial recognition. The base model has regular frames but the lenses themselves block infrared light, so the wearer’s eyes don’t appear on infrared security cameras.

Others have material in the rims that reflect visible and infrared light. To a security camera, the wearer’s eyes become a glare.

Urban declined to comment on sales figures. He makes the glasses full time, and said the business is profitable. He launched Reflectacles via Kickstarter in late 2016, and started shipping them to backers the next year. In all, 311 backers pledged more than $41,000 during that campaign.

Reflectacles do block facial recognition in certain situations, said Electronic Frontier Foundation’s Maass, who owns two pairs of the glasses. He teaches at the University of Nevada, and uses the glasses as a demonstration in surveillance and cybersecurity lectures.

Most customers know the protections Reflectacles and other privacy devices offer only go so far — especially when the device is wearable, and the user doesn’t plan on wearing it 24/7.

Brian Crowley, 41, a software product designer, said he keeps up with facial recognition technology advancements and the benefits they offer. He also worries about the problems they could cause.

“I think most people are not aware of how aggressive and how powerful technology is,” said Crowley, a Portage Park resident. “When you say it, it sounds paranoid, but facial recognition software is so, so fast.”

He’s also aware that tradeoffs are involved. Crowley owns a pair of Reflectacles but said he likely won’t wear them every day because they would block him from using the facial recognition feature to unlock his phone.

“I just want to have the convenience of unlocking the phone with my face,” he said.

Such is the rub with devices meant to thwart technologies: They must be more convenient than the technologies themselves.

Another issue: The devices typically only protect against one type of potential privacy violation, said Matthew Kugler, an associate professor at Northwestern University’s Pritzker School of Law. Reflectacles, for example, are effective against certain cameras and facial recognition, but they wouldn’t prevent a person’s phone from being tracked.

“There’s a certain kind of utility to it,” he said. But “I don’t think we’re ever going to see mass adoption of them outside of very particular contexts.”

“People shouldn’t have to walk around with really clunky glasses or really complicated T-shirts in order to protect their privacy,” said Electronic Frontier Foundation’s Maass. “We should have policies in place that understand that democracy does require a certain amount of anonymity.”