500 new recruits are about to start boot camp at Naval Station Great Lakes. The military won’t say how many coronavirus cases are on the north suburban base.

Next week, about 500 new recruits are expected to report to Naval Station Great Lakes near North Chicago, the first to arrive since the Navy stopped sending future sailors late last month as the coronavirus pandemic spread around the world.

But a significant question remains unanswered as the recruits are about to arrive in the north suburbs: How many people on the base have had COVID-19?

“Our adversaries employ trained intelligence agents who are constantly watching everything we do to build intelligence estimates of our readiness,” Defense Department spokeswoman Jessica Maxwell wrote in an email.

What’s clear is that the virus has come to the Lake County base. Last month, Navy officials confirmed cases in a recruit and a civilian employee. Then, the Defense Department put out a news release March 30 saying the military would no longer give case counts at individual bases. 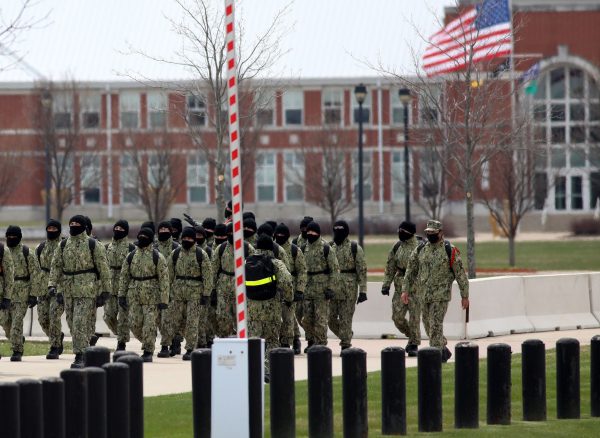 Sailors drill at the Naval Station Great Lakes near North Chicago on Tuesday, April 14, 2020. The Lake County base is the home of the U.S. Navy’s only boot camp.
(Stacey Wescott / Chicago Tribune/TNS)

That secrecy leaves the public guessing about the disease’s impact at a busy military hub that employs some 25,000 people, houses about 15,000 and is roughly five times the size of Grant Park. Great Lakes officials pointed to cleaning, physical distancing and other measures designed to stop the virus.

Still, many operations continue at a base that houses the Navy’s only boot camp. On Tuesday, personnel in camouflage fatigues and backpacks could be seen marching in formation wearing black face coverings.

Attempts to reach the parents of Great Lakes recruits were unsuccessful. But Recruit Training Command Facebook posts have provided a place for future sailors’ loved ones to voice both pride and concern.

“I’m a proud parent. My daughter is set to graduate May 1st. God bless them all and keep them safe and healthy,” one man wrote.

Added a woman: “I sent some letters to my daughter, just don’t know if she received it because they were quarantined for two weeks.”

Nationally, the coronavirus has worked its way into the Navy’s ranks while providing the backdrop for political controversy.

As of early Wednesday morning, the Navy had reported 1,187 cases and six deaths among military personnel, their families, civilian employees and contractors.

About half of those cases and one death were from the USS Theodore Roosevelt, an aircraft carrier now in Guam. As the virus swept through the ship, Capt. Brett Crozier was fired from his command after an email he sent pleading for help became public. Acting Navy Secretary Thomas Modly flew to the ship, where he berated the crew and said Crozier was “naive” or “stupid.” Amid the ensuing backlash, Modly resigned.

Locally, the disease’s impact on Great Lakes might be reflected in numbers from the hospital near the base, the Captain James A. Lovell Federal Health Care Center. The facility, jointly operated by the Defense Department and the Department of Veterans Affairs, had reported 95 cases as of Wednesday.

It’s unclear how many of those cases involved people who live or work at Great Lakes, as the hospital also serves area veterans, said Julie Ewart, a Lovell spokeswoman. Ewart also noted that civilian employees and contractors on the base generally are not treated there, and that family members of military personnel might get medical help elsewhere.

Lake County health officials confirmed that the base’s case numbers were being reported to state officials. The Tribune requested that data from the state but had not received it.

There is historical precedent for a virus taking hold at Great Lakes.

During the current pandemic, Great Lakes officials have mandated physical distancing, the use of cloth face coverings and home screening for those who work there, among other measures, base spokesman John Sheppard told the Tribune. He added that the base has canceled various events and started virtual religious services.

Meanwhile, 900 or so staff members who work with recruits and live off-base are being kept on the installation full time for most of April to prevent the spread of disease, Hecht said.

For future sailors who arrived before the pause in new recruits, work has gone on, Hecht said.

“We continue the essential task of training new sailors and, upon graduating, sending them to their follow-on training assignments,” he wrote in an email.