The Trump administration is proposing $850 billion in economic stimulus to contain the effects of the coronavirus, including relief for small businesses and the airline industry, and sizable checks for American workers.

Treasury Secretary Steven T. Mnuchin is expected to outline the request to Senate Republicans at a closed-door lunch on Capitol Hill and will be discussing the plan with House Democrats as well.

“We’re looking at sending checks to Americans immediately,” Mnuchin said in a news conference at the White House, adding that the checks would go out in the next two weeks. 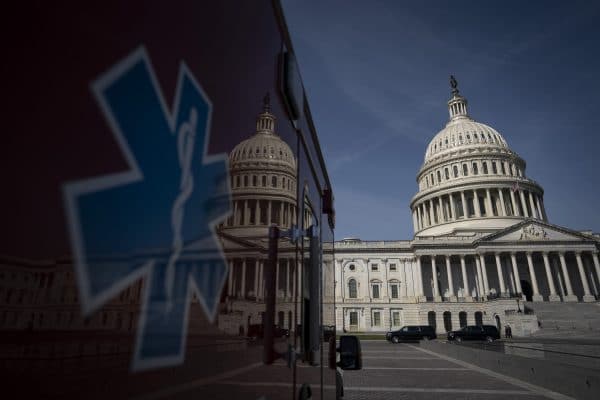 An ambulance sits parked on the plaza outside the U.S. Capitol March 16, 2020 in Washington, D.C. After taking the weekend off, the Senate will return on Monday afternoon and will take up the House-passed coronavirus relief bill. The legislation in the House bill includes some provisions for paid emergency leave and free COVID-19 testing. (Drew Angerer/Getty Images/TNS)

“We look forward to having bipartisan support … to pass this legislation very quickly,” he added.

The plan is also expected to include payments to small businesses and loan guarantees to industries such as airlines and hotels, he said.

“This is worse than 9/11” for the airline industry, Mnuchin said, saying the sector is “almost ground to a halt”

“Tremendous things are happening,” President Donald Trump said of the conversations between Mnuchin and lawmakers. “We had a very good talk and I think we’re right down the same track.”

Senate Majority Leader Mitch McConnell, R-Ky., indicated the request could be approved as quickly as this week. He did not weigh in on the White House plan, but pledged that the Senate would remain in session until it approves economic relief.

Mnuchin said the details of the plan — including how much Americans will receive — could be finalized by the end of the day. He then left the news conference to meet with lawmakers.

The relief package could be added to a bill already approved by the House. The fast-moving legislation reflects the urgent need to inject cash into a society that is rapidly changing as workers stay home, airlines cancel flights and restaurants and institutions close their doors to try to contain the spread of the virus. The possible speed of the legislative relief package mirrors the rush to inject money into the economy during the 2008 financial crisis, when lawmakers approved billions of dollars without a blink.

“We are crafting the major legislation that the American people deserve in the face of this major challenge,” McConnell said. “And it is my intention that the Senate will not adjourn until we have passed significant and bold new steps, above and beyond what the House passed, to help our strong nation and our strong underlying economy weather this storm.”

Meanwhile, Senate Democrats are preparing a $750 billion package of their own. Minority Leader Charles E. Schumer, D-N.Y., is expected to outline the details of the plan during a Senate Democratic meeting conducted via teleconference to avoid a large gathering of senators.

“The resulting economic downtown from this virus is already impacting millions of American families, workers and business — small, medium and large alike,” Schumer said on the floor.

Individual Senate Republicans have released a series of proposals as well. Sen. Mitt Romney of Utah has proposed a one-time $1,000 check for every American adult. Other Republicans have suggested similar proposals or a significant cut in payroll taxes.

White House officials appear to have set aside their push for a payroll tax cut for now, saying they wanted to get cash to Americans faster.

The House already approved a bill that would guarantee sick leave for a significant chunk of the U.S. workforce in the event of illness from the coronavirus.

The bill would also pay for testing and provide expanded food aid and unemployment assistance for people who lose work because of the pandemic. It comes on top of an $8.3 billion emergency spending measure that Congress passed early this month to respond to the crisis.

The travel and tourism industries have requested billions of dollars in economic relief. Trump met Tuesday with executives from the restaurant industry.