‘Two confirmed kills’: Veteran won’t shy away from it

Rick Cain, a Marine who had two confirmed "kills" while clearing an Iraqi city of insurgents in 2005, holds his daughter Genevieve at their home in Delaware. [Doral Chenoweth III/Dispatch/TNS)
March 25, 2020 Ken Gordon - The Columbus Dispatch
Share
Tweet
Flip

Mark Thomas was mortified the first time he heard one of his students ask Rick Cain this question about his combat tour in Iraq with the Marines:

“Did you kill anyone?”

“I was like, `No, no!'” recalled Thomas, a teacher at Delaware Hayes High School, who had invited Cain to speak. “And then Rick said, `No, Mr. Thomas, it’s OK. It’s all right.'”

Cain tells impressionable students that a military career can do for them what it did for him: instill maturity, discipline and a purpose while allowing one to see the world.

But Cain has not shied away from talking at his alma mater about what happened on May 8, 2005, the day he shot and killed two people in combat in Ubaydi, Iraq, near the Syrian border. 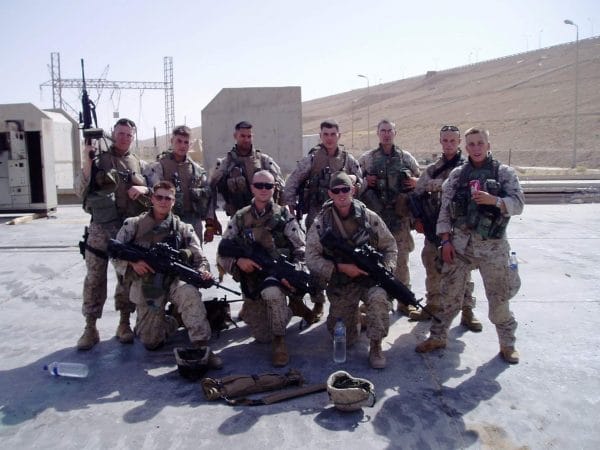 “It did not bother me to tell the kids, `Yes, I had two confirmed kills underneath my belt,'” Cain said. “It’s not something I’m proud of, but it’s something that I did while I was over there, and I have to live with it for the rest of my life.”

Cain, 35, was a member of the renowned Lima Company — part of the 3rd Battalion, 25th Regiment, 4th Marine Division — a reserve unit based in Brook Park, Ohio. During its six-month deployment in Iraq in 2005, 23 of Lima Company’s nearly 200 members were killed.

On May 8 of that year, Lance Cpl. Cain and his fellow Marines were supposed to provide support for an Army unit that was building a bridge over the Euphrates River. But in the early morning, they began taking small-arms and mortar fire, so they swept through Ubaydi, trying to pinpoint where the shots came from.

Cain, who was 20 years old, was providing “overwatch” — jumping from rooftop to rooftop and looking for threats to his fellow Marines below as they went house to house.

“And we got to the second-to-last house, where a firefight broke out,” Cain said. “The second they tried to gain entry, they were fired upon from inside by three or four insurgents.”

Moments later, from his rooftop perch, Cain saw two men emerge from the house into the backyard.

“That’s when I engaged the insurgents and ended up dropping two,” he said.

Cain used jargon like bullets “impacting” Marines and the rounds from his M-16 rifle “dropping” the two insurgents. As he continued, though, he visibly softened.

He said that when the house was declared cleared, his platoon sergeant, Anthony Goodwin, told him, “Cain, you did a good job. You have two confirmed kills.”

“Those were the last words he said to me,” Cain said.

Moments later, shots fired from a house that had supposedly been cleared struck Goodwin in the chest and neck, killing him.

Only when the area finally went quiet did Cain have time to reflect.

“At the time of the incident … I really didn’t think about what had happened at that time, because your training kicks in. It becomes (second) nature, every single instinct. At that particular time, it really didn’t affect me.

“But after my fire team got up to the rooftop with me and started providing the overwatch, I sat down in the corner and just sat there and thought to myself, `I can’t believe I just took two lives.'”

Cain made it through his deployment unscathed, at least physically. When he left the military in 2008, he said, he was worried he might have post-traumatic stress disorder, although he was never diagnosed.

Sudden loud noises, such as claps of thunder, bothered him. He was told that several times during nighttime storms, he jumped out of bed and “low-crawled” down the stairs — incidents he does not remember.

And because May 8, 2005, was Mother’s Day, he said he didn’t celebrate the day for about five years.

“It was just one of the hardest days we had,” Cain said. “So it was out of remembrance for all the fallen. My mother actually understood.”

Cain thinks being invited to talk to high school students has helped.

“I think that actually is how I cope with it, is I tell my story,” he said.

Cain had Thomas as a teacher at Hayes, and the two kept in touch after his 2003 graduation. Thomas said when Cain first returned from Iraq, “he came in to see me, and he was a little shaken up — not much, but a little.”

Seeing Cain talk to his current students, Thomas said he thought, “it soothed him, letting it out instead of holding it in. And then the kids would come up afterward and shake his hand and say, `Thanks for serving.'”

Cain now works for the U.S. Postal Service in Delaware, where he shares a home with his girlfriend, Kimberly Houck, and their blended family of four children (three from previous relationships and one together).

As he talked recently, their 1-year-old daughter, Genevieve, sat in his lap and cooed happily. A Marine Corps blanket hung on the wall behind them.

Cain is proud of his military service. He said he viewed it as a job. He joined the Marines and was told where to go and what to do in order to protect his country.

To him, it was that simple.

“I’m not ashamed of anything that I did while I was overseas,” he said. “A lot of people ask me, `How does it make you feel that you took somebody’s life?’

“And I mean, as much as I hate to say it and it’s not really politically correct to say it … they were shooting at me, I was shooting back at them.

“And the way that a lot of people look at it is: `It’s better them than you,’ as much as I hate to say it that way. But that’s what it is.”

Cannon Air Force Base monitoring about 100 airmen, dependents for coronavirus

F-35 factories in Italy, Japan are reopening after closing for coronavirus