The first ‘Rosie the Riveter,’ Rosalind Walter, dies at 95

Rosalind P. Walter, the first “Rosie the Riveter,” died at the age of 95 on Wednesday in New York City.

Walter rose to fame thanks in part to a newspaper column celebrating her work ethic during the night shift driving rivets into the metal bodies of Corsair fighter planes at a plant in Connecticut, according to the New York Times.

Walter was born in Brooklyn on June 24, 1924. She is survived by her son Henry S. Thompson, two grandchildren, four step-grandchildren and several step-great-grandchildren.

A popular 1942 song called “Rosie the Riveter” by the Four Vagabonds further canonized her legacy of empowering women to join in the war effort.

It was these that got the attention of the public, which inspired the most famous posters depicting women in the workforce during World War II, although different models were used. Although she can’t claim to be “the” Rosie the Riveter in the paintings, she was certainly the first.

It painting of the same name that cemented “Rosie’s” place in history. Westinghouse Company’s War Production Coordinating Committee issued the creation of morale-boosting posters for the war effort in 1942. Three were used in a magazine, one of which by the artist J. Howard Miller became known as the “We Can Do It” poster. To most, this is “the” Rosie the Riveter. 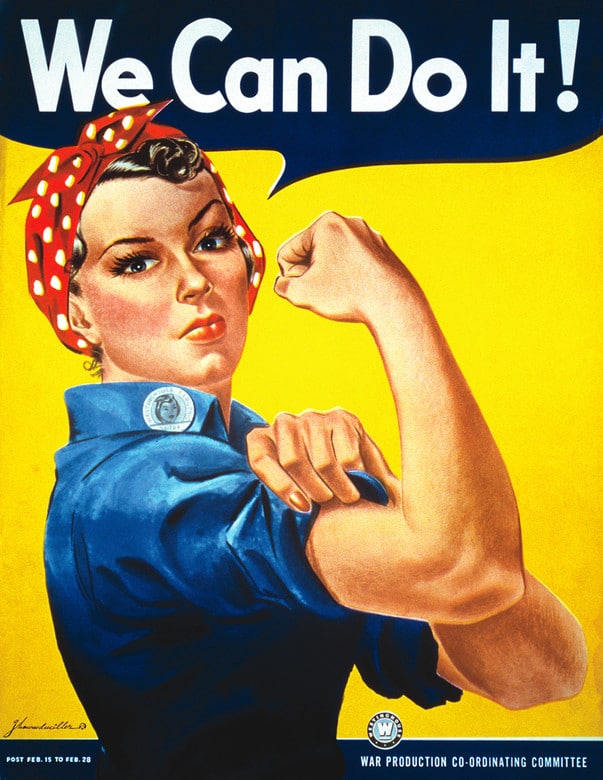 The painting depicts Rosie wearing denim coveralls she needed for her dangerous work previously reserved for men, embodying the same new reality for American women. Most notably is her stance, flexing her arm, saying “We can do it!” The model used for Miller’s painting was Naomi Parker Fraley, who died in 2018. However, Geraldine Hoff Doyle, who died in 2010, is commonly mistaken to have been the model.

During World War II, over 350,000 women joined the workforce to help develop munitions, equipment, and anything else the male soldiers needed across the seas to defeat the Axis powers.

Famous artist Norman Rockwell also created a painting of Rosie for the cover of the May 29, 1943, issue of The Saturday Evening Post. This one depicts Rosie as a muscular woman wearing a grim on her face, pins of honor on her lapel, work goggles on her forehead and Mein Kampf trampled under her foot. The model used for Rockwell’s painting was Mary Doyle Keefe, who died in 2015.