Ret. Navy SEAL Gallagher releasing book ‘The Man in the Arena’ telling his story from fighting ISIS to clearing his name

Retired Navy SEAL Eddie Gallagher plans to release a book this summer about his journey of being imprisoned and wrongfully charged with murdering an ISIS fighter, and ultimately proving his innocence.

The book, titled “The Man in the Arena,” was written by Eddie Gallagher and his wife, Andrea Gallagher, who announced the book on Sunday.

“My wife and I decided to write this book because the American people deserve to hear the truth about this case,” Eddie Gallagher told American Military News.

“What started as a select group of cowards telling lies to Naval Special Warfare leadership in an effort to ruin my reputation after a deployment in 2017, escalated to a full on plot to accuse me of murder and other false charges by 2018, with a trial that played out in the national spotlight,” he added. “The amount of corruption, lies, and deceit that we endured has never been fully told and the Navy is doing its best to sweep it under the rug, but we will not let that happen.”

The book is undergoing a Department of Defense security review, so the release date has not yet been finalized, but is anticipated spring or summer of this year. 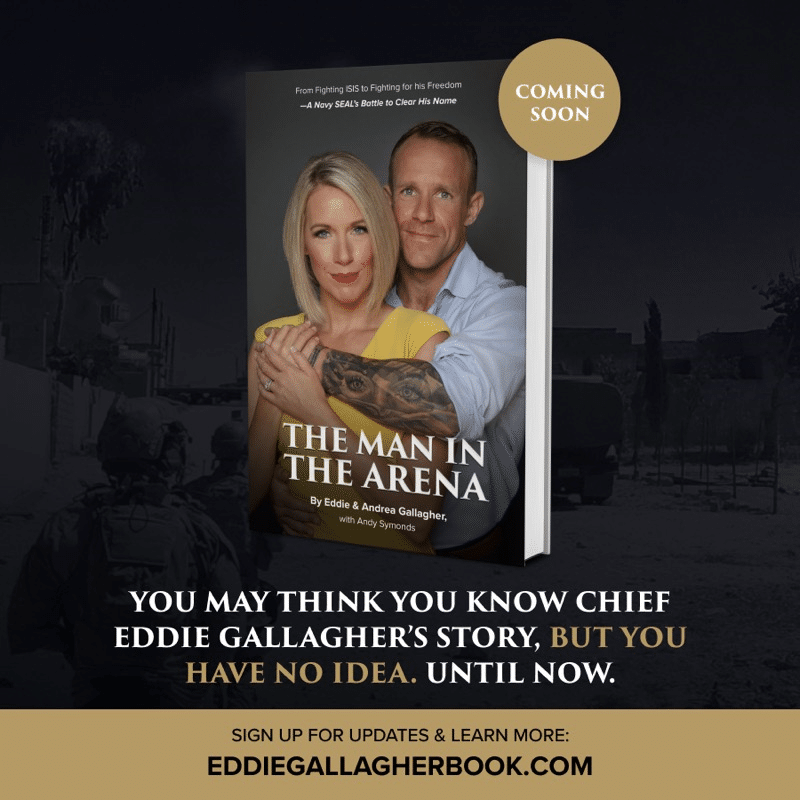 “The Man in the Arena” upcoming book by Eddie and Andrea Gallagher. (Photo courtesy of the Gallagher family)

“Our family has suffered a great deal of injustice and we are going expose the truth about what really happened to Eddie and our family during this horrific ordeal and why we chose to fight back,” Andrea Gallagher told American Military News.

Eddie Gallagher was arrested on Sept. 11, 2018 and remained imprisoned for nine months ahead of his trial. He was charged with killing an ISIS fighter in 2017, posing for a photo with the corpse, and several other charges pushed by claims from his disgruntled subordinates.

Nearly all of the charges were dropped during a trial marred by prosecutorial misconduct, and Eddie Gallagher was acquitted for the murder charge after Petty Officer Corey Scott had revealed under oath that he killed the ISIS fighter.

Eddie Gallagher, Scott, and other SEAL Team 7 members had brought the gravely injured fighter into the unit and attempted to perform life-saving procedures. Scott along made the decision to cover the ISIS fighter’s breathing tube so he would die by asphyxiation (suffocation) which he did.

Ultimately, the only charge Eddie Gallagher was convicted of was posing with a corpse. He and at least 10 others from Alpha Platoon, SEAL Team 7 were photographed together near the ISIS fighters’ corpse, however, he was the only one charged with the act.

Eddie Gallagher had sent the photo to a friend with a joking text, “got him with my hunting knife,” a piece of evidence that prosecutors used to allege he stabbed the ISIS prisoner to death.

“We took on malicious lies from accusers bearing false witness, corruption within the NSW Leadership, rouge NCIS agents looking to make a name for themselves, criminal actions of JAG Corps prosecutors, a broken UCMJ system… this list goes on and on,” Andrea Gallagher said. “Eddie is not a war criminal – he never was. He was accused of horrific acts which he always proclaimed he did not do and proved his innocence in court and was found not guilty of all major charges by a jury of his peers. ”

Eddie Gallagher was sentenced to partial forfeiture of pay and reduced rank for the charge. However, Trump intervened to reinstate Gallagher’s rank, allowing him to retire as an E-7 Chief Petty Officer. Trump intervened again when the Navy attempted to strip Gallagher’s Trident Pin, a symbol of his membership as an elite SEAL.

Though Trump intervened after the case was decided and sentence issued, Eddie Gallagher said he never wanted a presidential pardon because he wanted to prove his innocence in court.

“Even after a jury of his peers found him innocent of murdering an ISIS fighter, there still exists a perception that Chief Gallagher got away with murder and was pardoned by President Trump. Neither are true,” the Gallaghers said on the book’s website.

In his own words, the book tells Gallagher’s story from the day SEAL Team 7 encountered the ISIS terrorist, the conspiracy orchestrated by his platoon mates, the corruption of the military justice system, and everything since proving his innocence.

Now that Eddie Gallagher is retired and the legal nightmare behind him, he has been working to tell his story and ensure that no one else goes through a similar experience.

“Much of what really happened to our family was misrepresented or lost in translation,” Andrea Gallagher said. “Our goal with this book is to set the record straight. This is a book written by us, Eddie and Andrea, and we felt it was the only way to get the whole story out there in a form people could fully understand exactly how we got here. ”

Aside from the announcement of their book, the Gallaghers recently sat down with CBS’ “60 Minutes” to personally share their story, which aired on Sunday.

The Gallaghers also recently founded the Pipe Hitter Foundation, a nonprofit organization dedicated to supporting veterans, police officers, and their family through their fight against injustice. The foundation aims to provide financial and legal support, advocacy, and public affairs.