California has recorded 198 cases of the new coronavirus as of Thursday, up from 177 the day before, Gov. Gavin Newsom announced.

California officials are calling for the cancellation of all gatherings with 250 or more people to slow the spread of the coronavirus, a decision that came hours after a new federal travel ban and the suspension of the NBA season.

The recommendations have the potential to touch virtually all corners of social life across the state: community meetings, sports events and school theater performances. 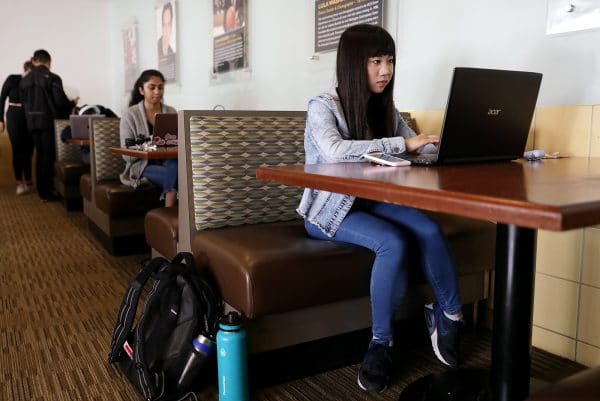 UCLA student Jessica Kwek, 19, attends a class online at the Bruin Cafe on Wednesday, March 11, 2020. All classes have been moved to online only. (Christina House/Los Angeles Times/TNS)

The move comes as President Donald Trump suspended most travel from Europe as the novel coronavirus continued its spread across the globe Wednesday, claiming its first life in Los Angeles County and causing the World Health Organization to refer to the outbreak for the first time as a pandemic.

The WHO has officially declared the coronavirus a pandemic. This is the first pandemic caused by a coronavirus. Infectious disease physician Timothy Brewer of the University of California, Los Angeles compares the novel coronavirus to other pandemics such as H1N1, MERS, SARS and influenza.

The new policy from the California Department of Public Health, which will be in effect at least through March, marks the first time the state has issued a request for all residents across California to adopt so-called “social distancing” measures and represents a new sense of urgency in the administration’s approach to fighting the virus.

“Changing our actions for a short period of time will save the life of one or more people you know,” Newsom said in a statement. “That’s the choice before us. Each of us has extraordinary power to slow the spread of this disease. Not holding that concert or community event can have cascading effects — saving dozens of lives and preserving critical health care resources that your family may need a month from now. The people in our lives who are most at risk — seniors and those with underlying health conditions — are depending on all of us to make the right choice.” 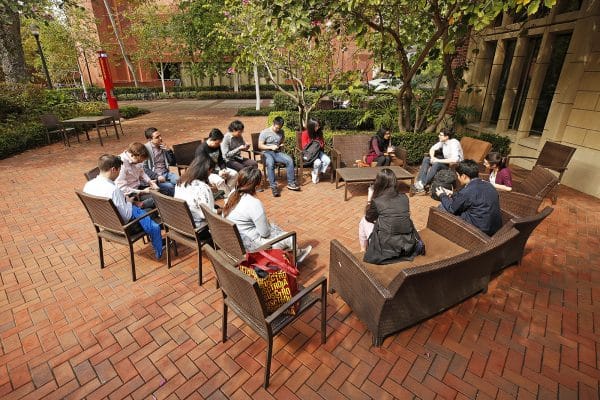 Assistant economics professor Jeff Weaver held an informal meeting for prospective PhD students who had traveled from around the world to visit the USC campus this week at the University of Southern California near downtown Los Angeles on Wednesday as classes are being held online for the first day. (Al Seib/Los Angeles Times/TNS)

Faced with two outbreaks of coronavirus on its ships and increasing government pressure, Princess Cruises announced Thursday it would suspend all operations for its vacation voyages for 60 days.

The news comes as federal and state authorities undertake a massive operation to disembark 3,500 passengers from the Grand Princess, a number of them infected by the virus, and move them to quarantine sites largely on U.S. military bases.

And in an announcement that brought the spreading public health crisis to Hollywood, Tom Hanks and wife Rita Wilson said they had tested positive for the virus. 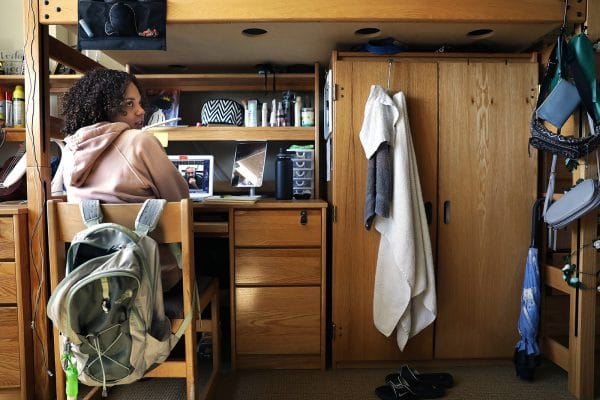 UCLA student Kiera Laney, 20, attends a class online in her dorm room on campus on Wednesday, March 11, 2020. All classes have been moved to online only. (Christina House/Los Angeles Times/TNS)

“Hello, folks,” Hanks said in a statement. “Rita and I are down here in Australia. We felt a bit tired, like we had colds, and some body aches. Rita had some chills that came and went. Slight fevers too. To play things right, as is needed in the world right now, we were tested for the coronavirus and were found to be positive.”

“It is believed that the virus was contracted out of the area and the individual did enter public areas while showing symptoms,” Tulare County Health and Human Services’ Public Health branch said in a statement.

The person is in stable condition, the statement said.

“The present situation with COVID-19 is unprecedented and the decision to cancel city-sponsored events is consistent with what appears to be emerging as the “best practice” and the manner in which cities and other public and private institutions throughout the state are responding to COVID-19 public health concerns.”

Pasadena city officials announced Thursday that the city was canceling all “nonessential” city-sponsored events and activities until further notice.

Meanwhile, San Francisco and Seattle announced bans on large gatherings, and a growing number of universities moved to hold classes online. In a sign of how surreal the disruption of American life looks to become, NCAA tournament games for men’s and women’s basketball will be played in empty arenas.

“This is the first pandemic caused by a coronavirus,” WHO chief Tedros Adhanom Ghebreyesus said. “We have rung the alarm bell loud and clear.”

In a televised address to the nation Wednesday night, Trump imposed stringent new restrictions, barring foreign nationals traveling from Europe from entering the country for 30 days, beginning Friday. The ban does not include the United Kingdom and does not affect travel by U.S. citizens, permanent residents or immediate family members of U.S. citizens.

It applies to any foreign national who has been in Europe during the 14 days prior to their scheduled arrival in the U.S.

“The European Union failed to take the same precautions” as the United States did in barring travel from China, Trump said, claiming that U.S. clusters of the disease were “seeded by travelers from Europe.”

Trump said he was instructing the Small Business Administration to provide new low-interest loans for some businesses hurt by the outbreak and asked Congress to approve $50 billion in additional funding for that purpose. And he asked Congress again to approve payroll tax relief, a proposal that neither party on Capitol Hill has favored.

“This is the most aggressive and comprehensive effort to confront a foreign virus in modern history,” Trump said. “I am confident by continuing to take these tough measures we will significantly reduce the threat to our citizens, and we will ultimately and expeditiously defeat this virus.”

The NBA’s announcement came after a player for the Utah Jazz tested positive for the coronavirus. In a bizarre scene, the game in Oklahoma City between the Thunder and the Jazz was delayed seconds before tip-off and canceled minutes later.

Meanwhile, L.A. County health officials continued to urge people — particularly older residents, pregnant women and those with underlying health problems — to be cautious in large crowds or avoid them altogether, but they said the number of cases did not yet warrant closing schools or stadiums.

“We will get to a point, unfortunately, here in L.A. County, where we will be asking for events to close,” said Barbara Ferrer, director of the Los Angeles County Department of Public Health. “But we’re not there yet.”

The person who died was a woman older than 60 who had underlying health conditions and was visiting Los Angeles County after extensive travel over the last month, including a long layover in South Korea.

“Shortly after being hospitalized, she unfortunately passed,” Ferrer said.

Nine new cases confirmed Wednesday brought the total to 29 in the county, officials reported — a reflection of the minimal amount of testing conducted so far. Ferrer added that one of the new cases came from community spread and that the contagion is not just in a few pockets but “scattered throughout the entire county.”

Newsom said Tuesday that thousands of California residents may have been exposed to the virus. The United States has surpassed 1,300 coronavirus cases, with most in Washington state, New York and California, where the Department of Public Health reported a total of 198 positive cases.

The mounting side effects of the virus could be seen across the country: empty subway cars, quiet streets, a longtime Houston rodeo canceled, tours of the Capitol stopped in Washington, and the Dow Jones industrial average entering bear territory after an 11-year bull market.

In Washington state, Gov. Jay Inslee banned events involving any gathering of more than 250 people in the Seattle metro area — be it Sunday church, a wedding, a concert or a political fundraiser. The ban does not extend to airports, grocery stores or transportation systems such as buses and ferries.

The big conundrum public officials are facing is whether to close school systems.

But Los Angeles, Santa Clara and San Francisco counties are holding off such closures, at least for now.

“In children, the illness has been very mild,” said Dr. Grant Colfax, health officer for San Francisco, adding that they were either showing no signs of physical illness or experiencing mild flu-like symptoms.

In a study of nearly 45,000 lab-confirmed coronavirus cases, no one under the age of 10 had died of the virus.

The coronavirus outbreak has now sickened at least 127,000 people on six continents and caused more than 4,700 deaths.

The objective now is to spread out the inevitable infections so that the health care system isn’t overwhelmed with patients.

Public health officials have a name for this: flattening the curve.

Left alone, the virus would race through the population, and the number of cases would shoot skyward and then fall, resembling the shape of a mountain peak. But with containment measures, the curve can be squashed into a wide hill.

The outbreak would take longer to run its course. But if the strategy works, the number of people who are sick at any given time will be greatly reduced.

Ideally, it would fall below the threshold that would swamp hospitals, urgent care clinics and medical offices. That’s why public health officials will continue the labor-intensive work of recording and tracking new infections, ensuring that infected individuals stay home and guarding the borders against the arrival of new cases.

At the same time, they’ll expand their mitigation efforts, such as canceling events and encouraging people to work from home. Many universities moved their classes online.