Their names will likely never be known, but now their service will be remembered.

More than a year ago, the remains of five soldiers buried in the Fort Brooke Estuary Cemetery during the 1800s were discovered as the area near Channelside Drive and Meridian Avenue was being developed as part of the $3 billion Water Street project in downtown Tampa.

On Wednesday, the U.S. Army reburied the soldiers at the Curlew Hills Memory Gardens in Palm Harbor with a military service that included a rifle salute by the Florida Army National Guard’s Honor Guard. 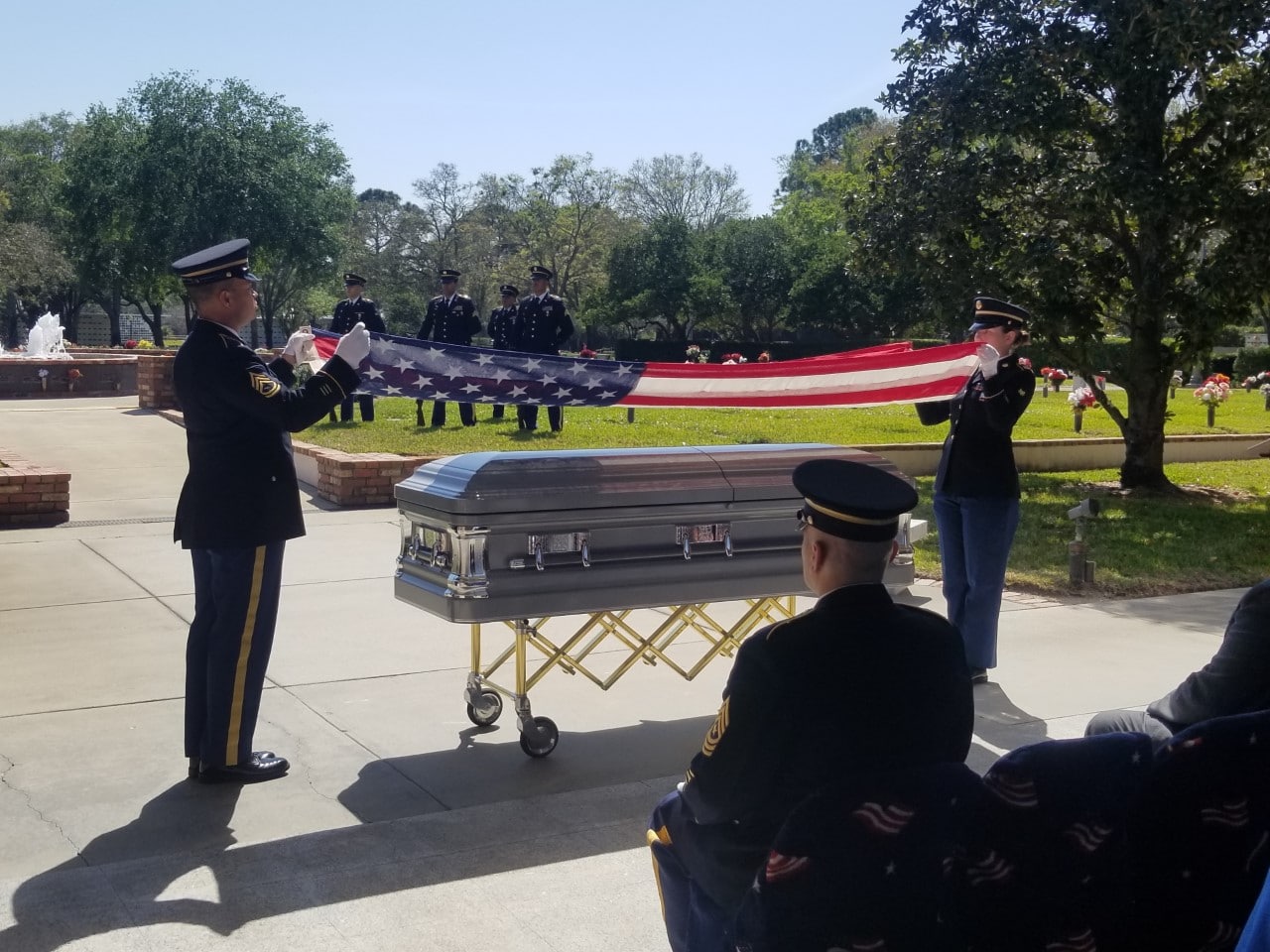 “The Army honors America’s commitment to never forget or forsake those who served and sacrificed for our country,” Col. Wayne Marotto with the Office of Army Cemeteries told the Tampa Bay Times.

“The interment of the Fort Brooke unknown soldiers symbolizes the Army’s commitment to honor and remember all soldiers.”

There were few human remains left after all these years, Marotto said, so each was placed in a separate container and the five containers were placed in a single coffin.

Military buttons found in the original graves identified the men as U.S. soldiers, Col. Marotto said, and archaeologists are confident they fell victim to disease.

“There are many ways they could have died,” Rodney Kite-Powell with the Tampa Bay History Center told the Times. “Dysentery, measles, smallpox, malaria, yellow fever, the flu. It was a tough time to be in Florida.”

Nothing else in the graves has yet provided clues about their identities, names, ages, hometowns or when they died.

Still, “these men had a band of brothers who knew their name,” said the Rev. Steven Harris of Dunedin’s Holy Apostles Church, who performed the graveside service. “They deserve to be honored for their sacrifice.”

Fort Brooke is the military installation established in 1824 near the mouth of the Hillsborough River in what today is downtown Tampa. Soldiers there waged war against the Seminole Nation through 1858.

Fort Brooke was later used as an outpost during the Civil War, 1861-1865. The U.S. military insignia on the soldier’s uniform buttons shows they were not members of the Confederate forces, Marotto said.

If the five soldiers were officers, they could have come from upper-class families, Kite-Powell said.

“Rank and file soldiers, they would generally be from the lower economic class, maybe first or second-generation immigrants and from farming families,” he said.

Soldiers came from across the east to serve at Fort Brooke during the Seminole Wars, Kite-Powell said.

The fort was decommissioned 1883, the land was broken into several parcels and the cemetery was forgotten. It was discovered in summer 2018 as developer Strategic Property Partners began work on the Water Street project.

Fort Brooke had three burial sites. The other two were found during construction of the Fort Brooke Garage in 1980 and the venue now known as Amalie Arena in 1994.

Additional human remains may also have been recovered during the Water Street construction but have not been made public. The Seminole Tribe is mentioned as a stakeholder in correspondence about the discovery of Estuary Cemetery, but the tribe has refused to comment.

In addition, more soldiers may have been buried there then exhumed when the fort was decommissioned.

“I have heard that the Army did, in fact, disinter some soldiers and moved them to the St. Augustine National Cemetery,” Kite Powell said. “But I walked that cemetery, every square foot, and saw no indication anyone there was moved from Fort Brooke.”

Around 15 people, mostly local veterans, attended Wednesday’s service at Curlew Hills Memory Gardens. The grave is about 20 yards from the cemetery’s memorial to first responders who died in the 9/11 terrorist attacks.

Mike Doran, 37, and a retired staff sergeant with the U.S. Air Force, kept his 5-year-old son Brent Doran home from school to attend.

“It is important to honor these men,” Doran said. “I was worried no one else would come.”

“I am a veteran and they are veterans,” said Doran, who held the rank of sergeant with the U.S. Marines and is now a member of Clearwater’s nonprofit Marine Corps League. “We have to support each other.”