Arthur Hashagen, a World War II veteran, is turning 99 on March 23 and his family is asking for people to help him celebrate the day.

“To honor this amazing milestone in his life he would love to receive birthday cards, so we are asking all our friends and family to please send a card to him and to please share this link so we can shower him with cards!,” his granddaughter Hannah Clark-Hafitz said in a January Facebook post.

Birthday cards and letters can be addressed to:

“It’s very gratifying, I should say,” Hashagen said. “I’m surprised and pleased of course. I think that they are somewhat surprised to be able to talk to someone like me at 99 years.”

He has already received from as far away as Africa and India. He said he would try to respond to all the cards and letters he receives.

Leigh Miller, Hashagen’s oldest daughter, said the idea came about as a way to cheer Hashagen up. Hashagen’s wife Virginia passed away in 2016 and Miller said he now suffers from arthritis and can no longer take on the mechanical tasks that used to keep him busy. His family hoped that an outpouring of birthday cards and more regular mail would encourage him to keep in touch with the world.

While Hashagen only had about seven years of formal schooling, he was very capable with his hands and very mechanically minded.

“He’s always been a very hands on, go to, fixer guy,” Miller said.

During the depression, when his family was on hard times, Hashagen joined the Civilian Conservation Corps where he worked on infrastructure projects, like building roads and dams. Later on, Hashagen went to work in a machine shop and his work took on new importance as his company machined parts for the U.S. Navy at the start of World War II.

Miller, who has spent hours recording and transcribing Hashagen’s stories, said Hashagen’s mechanical skills were so valued that his company gave him three deferments from the wartime draft so he could continue to work.

After his third deferment ended, Hashagen was automatically drafted and given the choice to serve in either the U.S. Army or the U.S. Navy. Through his work as a machinist, Hashagen gained a preference for the Navy and requested assignment to that branch of service, but the recruiter made an error and instead assigned him to the Army.

It was during Hashagen’s Army training that he became ill and had to be reassigned to a different training unit. His original unit was sent off to fight in the Battle of the Bulge, where many of his friends were killed or captured.

Hashagen was instead assigned to a unit bound for the Pacific Theater of the war. As he participated in campaigns across many south Pacific islands, Arthur worked as a mechanic and repaired vehicles and other equipment for the Army. 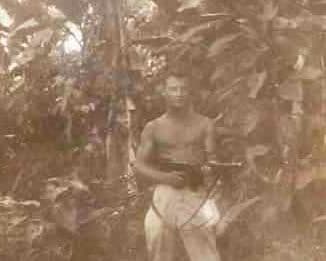 Handy as ever, Miller recalled one of Hashagen’s stories where he repurposed discarded parts to build his own motor scooter. She said he was riding that scooter along the edge of a military runway on the Indonesian island of Biak when he narrowly avoided a strafing attack by a Japanese bomber attacking planes parked on the runway.

She said Hashagen survived another bombing attack in which a neighboring Army unit took heavy casualties from a “daisy cutter” bomb configured to explode in mid-air. Hashagen found himself without a scratch, even as he recalled picking up shrapnel strewn all around him.

Hashagen avoided injuries from bombing attacks and poisonous jungle fauna, but was injured during the war when he brushed against an electrical short while repairing a doughnut machine for the Army pilots. Hashagen said that after recovering from the shock of his injuries he finished repairing the machine.

After the war ended, Hashagen returned to the U.S. to find his sister had sold his car, the machine shop he worked for had been bought out and the bank had foreclosed on his home.

Hashagen said he took the first job he could find and adjusted to life as a civilian.

“I lost quite a bit and I was unhappy with that,” Hashagen said, “but I recovered.”

Hashagen went on to raise four children, and become a grandfather to seven grandchildren and five great-grandchildren.

Miller said Hashagen has continued to stay active and despite several concussions and other serious injuries throughout his life. He even worked until 85, doing security at a private school when he tried to stop a runaway car and fell under it and broke his sternum.

Miller said Hashagen’s family is hoping to save most of the birthday cards for closer to his birthday. Members of the family are asking for letters from coworkers and classmates and have even requested a birthday card from the president.

Birthday cards and letters can be addressed to: