We are Iwo: Medal of Honor recipient Cpl. Tony Stein

Throughout a battle-long commemoration of the 75th anniversary of one of the bloodiest battles in American history, the Marine Corps is honoring some of the thousands of Marines and Sailors – far too many to highlight during the commemoration – who exemplified Nimitz’s sentiment.

Cpl. Tony Stein is one of the them.

The Dayton, Ohio, native enlisted in the Marine Corps Reserve Sept. 22, 1942, and landed at Iwo Jima on the battle’s first day. His actions that day earned him the Medal of Honor. 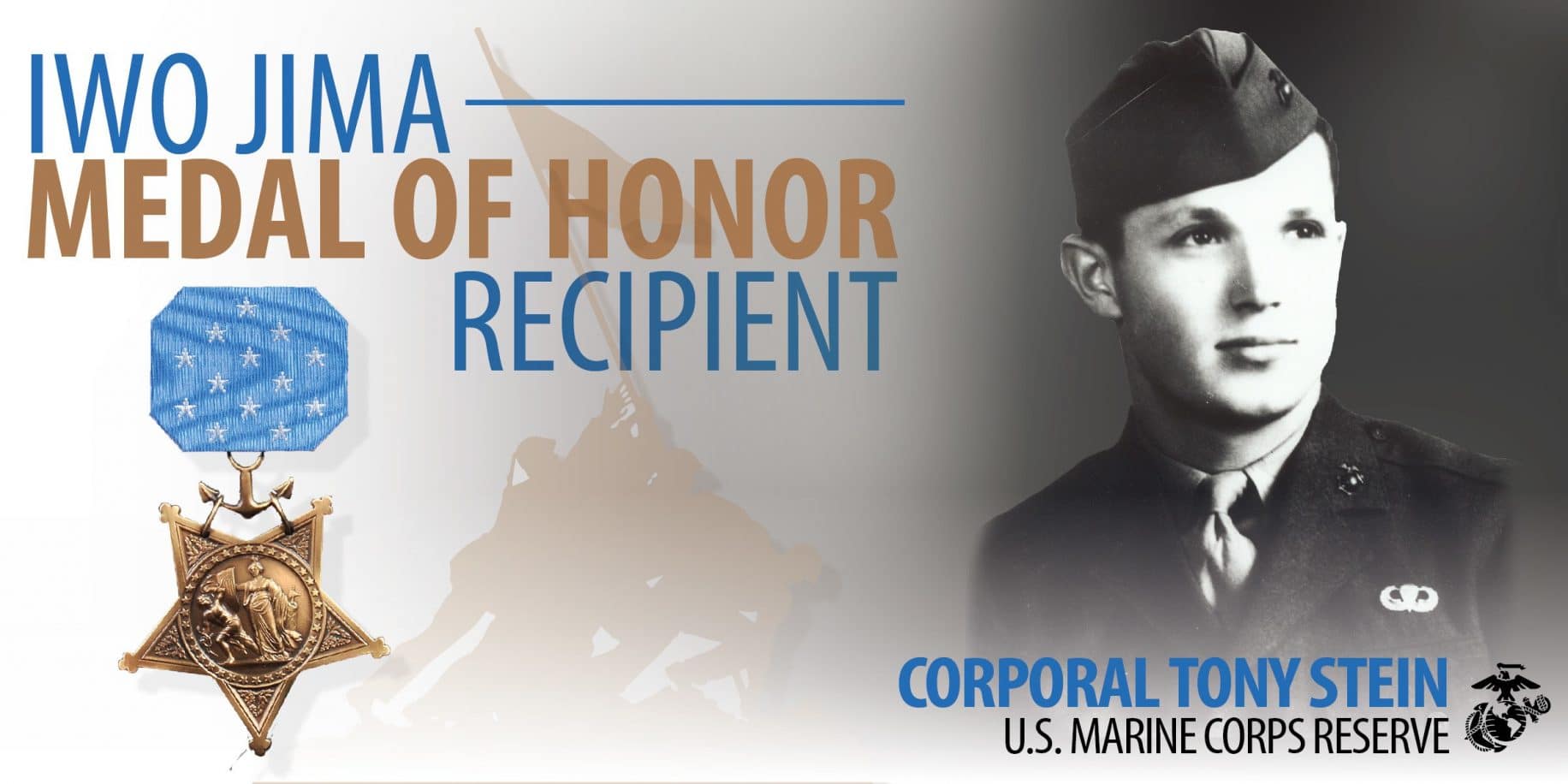 Cpl. Tony Stein was posthumously awarded the Medal of Honor for his actions during the Battle of Iwo Jima on Feb. 19, 1945. (U.S. Marine Corps photo by Lance Cpl. Audrey Schmitt Alves)

“For conspicuous gallantry and intrepidity at the risk of his life above and beyond the call of duty while serving with Company A, 1st Battalion, 28th Marines, 5th Marine Division, in action against enemy Japanese forces on Iwo Jima, in the Volcano Islands, 19 February 1945.

“The first man of his unit to be on station after hitting the beach in the initial assault, Cpl. Stein, armed with a personally improvised aircraft-type weapon, provided rapid covering fire as the remainder of his platoon attempted to move into position. When his comrades were stalled by a concentrated machinegun and mortar barrage, he gallantly stood upright and exposed himself to the enemy’s view, thereby drawing the hostile fire to his own person and enabling him to observe the location of the furiously blazing hostile guns.

“Determined to neutralize the strategically placed weapons, he boldly charged the enemy pillboxes 1 by 1 and succeeded in killing 20 of the enemy during the furious single-handed assault. Cool and courageous under the merciless hail of exploding shells and bullets which fell on all sides, he continued to deliver the fire of his skillfully improvised weapon at a tremendous rate of speed which rapidly exhausted his ammunition. Undaunted, he removed his helmet and shoes to expedite his movements and ran back to the beach for additional ammunition, making a total of eight trips under intense fire and carrying or assisting a wounded man back each time.

“Despite the unrelenting savagery and confusion of battle, he rendered prompt assistance to his platoon whenever the unit was in position, directing the fire of a half-track against a stubborn pillbox until he had effected the ultimate destruction of the Japanese fortification. Later in the day, although his weapon was twice shot from his hands, he personally covered the withdrawal of his platoon to the company position.

“Stouthearted and indomitable, Cpl. Stein, by his aggressive initiative sound judgment, and unwavering devotion to duty in the face of terrific odds, contributed materially to the fulfillment of his mission, and his outstanding valor throughout the bitter hours of conflict sustains and enhances the highest traditions of the U.S. Naval Service.”

For his actions on Feb. 19, 1945, Stein was posthumously awarded the Medal of Honor, which was presented to his widow, exactly one year later.

Following the war, Stein’s remains were returned to the United States from the 5th Division Cemetery for reinterment in Dayton. Stein, who was Dayton’s only World War II recipient of the Medal of Honor, was buried with full military honors, Dec. 17, 1948.

Marines are charged with carrying forward the memories of those who fought before them. The core values of honor, courage and commitment connect today’s Marines to generations of warriors who committed themselves to the nation’s defense. We are Iwo.