Arizona’s Salt River Pima-Maricopa Indian Community unveiled a memorial to the USS Arizona, which was destroyed in the Japanese attack on Pearl Harbor on Dec. 7, 1941.

The USS Arizona Memorial Gardens at Salt River is a culmination of many years of planning. A key centerpiece of the memorial was one of the original boathouses preserved from the sunken ship. Ric Hartman, who oversaw the process to include the USS Arizona’s boathouse in the memorial described the community’s efforts to create the memorial as a “labor of love.”

The memorial is comprised of hundreds of pillars, formed to the exact size and shape of the USS Arizona and the relic of the boathouse is placed in the same approximate location as it would have existed on the ship before it was struck in an ammunition magazine by a Japanese torpedo bomber. The monument’s raised and lit pillars represent the members of the crew who lost their lives in the attack, while lowered pillars represent those crew that survived the attack.

“There was so much that that went into this project,” said Blessing McAnlis-Vasquez, the Salt River Pima-Maricopa Indian Community Tourism Division Manager. 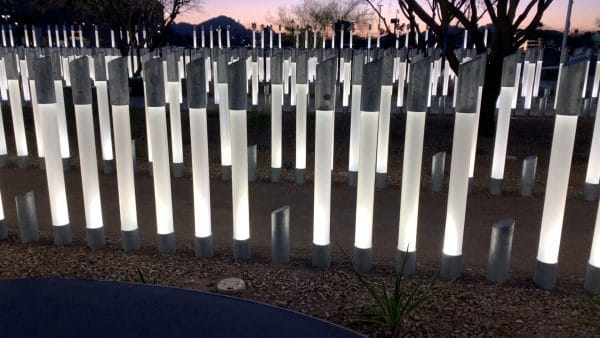 Pillars at the USS Arizona Memorial Gardens at Salt River represent the lives of U.S. service members aboard the USS Arizona during the Dec. 7, 1941 Pearl Harbor attack (Photo provided by the Salt River Pima-Maricopa Indian Community)

McAnlis-Vasquez noted the research that went into creating the monument, including benches with quotes from survivors of the Pearl Harbor attack. She said the boathouse also contained detailed hand-drawn blueprints of the USS Arizona which visitors could view.

Hartman, who is himself a former U.S. Army captain, described the memorial as a monument for all service members from all conflicts.

“Our dream was to build a place where Veterans and soldiers of all services and all conflicts of all time, would have someplace to be able to come and reflect,” he said.

Hartman also noted the native community’s particular interest in raising a monument where they could pay tribute to the USS Arizona and the service of many Native Americans who have fought for the U.S.

He said the nearby American Legion Post 114, the “Bushmasters” was one group of predominantly Pima and Maricopa natives who participated in the monument’s creation.

McAnlis-Vasquez said the new USS Arizona monument incorporates the community’s existing veteran memorial circle. The outline of the memorial is a basket design emblematic of the Pima tribe, while the footing of the circle reflects a Maricopa design. 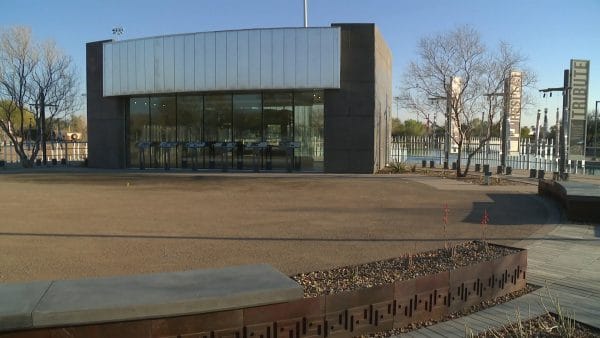 The community first began working to create a monument for the USS Arizona after it gifted a flag from the ship in 2007, which the community has since flown as part of its annual Pearl Harbor day remembrance. Hartman said efforts to obtain the boathouse and incorporate it into the monument became more involved around 2014.

He said the U.S. Navy helped identify the relic as one of the parts salvaged from the ship and facilitated the transfer of the relic from a Veterans group in Honolulu, Hawaii that had ownership over the boathouse.

Hartman and McAnlis-Vasquez said the Honolulu veterans group was gracious in transferring the boathouse and the efforts to transfer the boathouse over were also aided by other groups like the U.S. Navy league and even a California trucking company that donated their services to help make the memorial happen.

“I think that’s just kind of a testament to the entire journey,” McAnlis-Vasquez said of the effort to obtain the USS Arizona boathouse. “Everyone wants to do good by this piece and, we’re just the centerpiece for it at the end of the day.”

McAnlis-Vasquez said the boathouse represents the largest relic ever given to a tribal community. 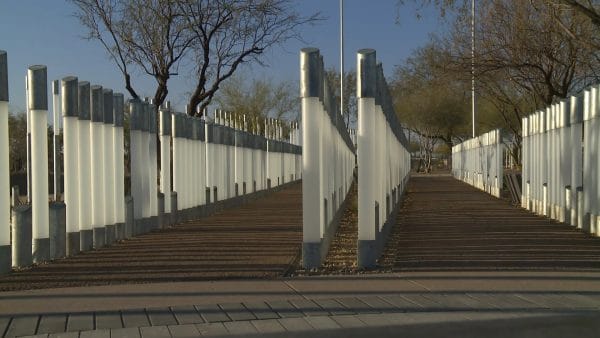 Pillars at the USS Arizona Memorial Gardens at Salt River represent the lives of U.S. service members aboard the USS Arizona during the Dec. 7, 1941 Pearl Harbor attack (Photo provided by the Salt River Pima-Maricopa Indian Community)

The Salt River Pima-Maricopa Indian Community planned to dedicate the new memorial on Friday night. Pearl Harbor survivor Jack Holder, 99, of Chandler, AZ and retired Navy community member Bob Aguilar will flip the switch that lights the pillars of the memorial. The community will also host singers Ricardo Leonard to sing a traditional Pima song while Lynwood Vest will sing a song of the Maricopa tribe.