A military spouse and her children were recognized by President Trump at his Tuesday night State of the Union address just before a surprise reunion with her husband after his seven-month deployment.

“Amy works full time and volunteers countless hours helping other military families. For the past seven months, she has done it all while her husband Sgt. 1st Class Townsend Williams is in Afghanistan on his fourth deployment to the Middle East,” Trump continued. “Amy’s kids haven’t seen their father’s face in many months.

“Amy, your family’s sacrifice makes it possible for all of our families to live in safety and peace, and we want to thank you,” Trump added.

“Amy, there is one more thing,” Trump continued. “Tonight we have a very special surprise. I am thrilled to inform you that your husband is back from deployment. He is here with us tonight and we couldn’t keep him waiting any longer.”

Sgt. Williams, a U.S. Army paratrooper with the 82nd Airborne Division, entered the gallery and had a warm embrace with his family. 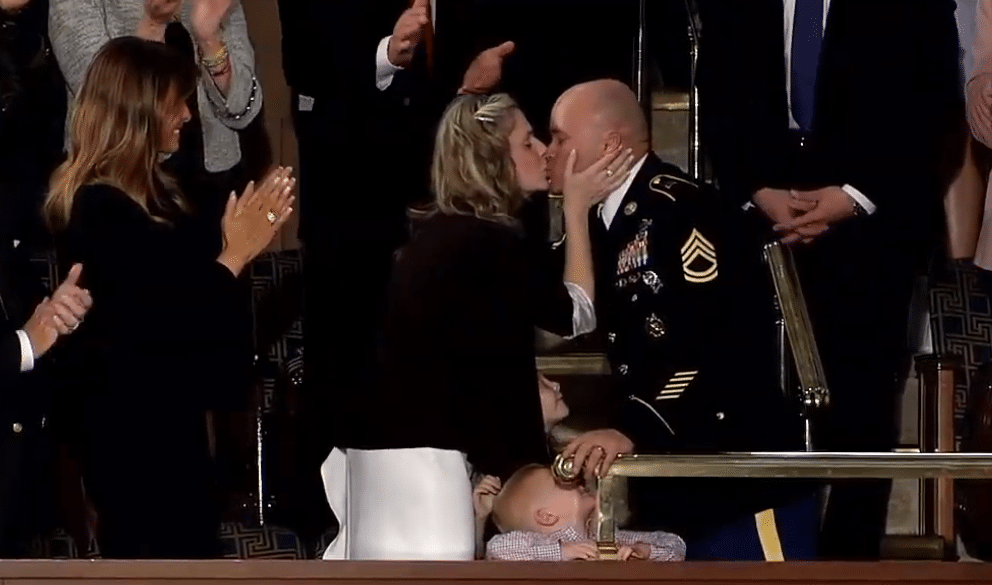 Staff Sgt. Townsend Williams reunited with his wife Amy, and children Eliana and Rowan at President Trump’s State of the Union address on Feb. 4, 2020. (White House/Released)

The reunion garnered a standing ovation and chants of “U-S-A! U-S-A!”

Amy Williams is a military spouse and mother of two young children.

She works full time and devotes hundreds of hours to helping military families, all while raising her two children as her husband serves his fourth deployment.

Their family was reunited tonight at #SOTU. pic.twitter.com/UQQAVUXHto

SFC Williams is a paratrooper with the 82nd Airborne Division. The U.S. Army posted a video of Williams introducing himself.

Sgt. 1st Class Townsend Williams, @82ndABNDiv, was just reunited with his family at the #StateofTheUnion. They represent our great Army families & the sacrifices they make on behalf of the nation. We are honored to have Soldiers like Williams in our ranks. #SOTU2020 #SOTU pic.twitter.com/JjESFedQXT

“I did a branch transfer in 2005 from the Air National Guard after I saw the 82nd paratroopers. I realized that’s what I wanted to be,” Williams explained.

“I hold service to my county, my unit and my men very close to my heart. I wouldn’t be able to do any of this without my family, and I’m grateful to be able to serve in the United States Army,” he added.