“Get up early and eat a good breakfast,” that’s what World War II veteran Bill Meuth says keeps him going strong. “I still get up at 5 a.m. every day and cook my breakfast: two eggs, two (pieces of) bacon and two toasts.”

Meuth knows a little something about the importance of a healthy routine, as he turned 100 on Dec.18, 2019. His family recently held a celebration at Sacred Heart Parish Hall to mark the occasion.

“100 never looked so good” was the party’s theme, which was fitting for Bill. He’s still as mentally sharp as ever, and his friendly disposition and easy wit made it clear that he was enjoying the day visiting with loved ones and family.

Bill was an army medic in WWII and was at the Normandy invasion. The Caldwell County VFW Post 8927, in conjunction with the American Legion and Caldwell County Veterans Services, were on hand at the party to present Bill with a certificate honoring his military service. 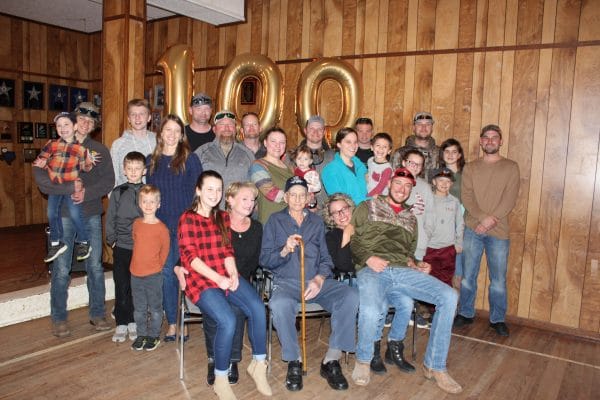 After returning home to Rockne from the military, Bill went to work in the oil fields. In 1943, he married Lucy Krawietz, and the couple was married for 72 years. They have three sons and one daughter: Bernard Meuth, Carl Meuth, Joe Meuth and Linda Peschke.

They couple also has 14 grandchildren, 15 great-grandchildren and two great-great grandchildren. Bill cared for his wife until her death in 2015, and he still lives at the home in Dale where they spent most of their married life. His son Joe and daughter-in-law Bobbie live next door, so they are there every day to assist with Bill’s needs.

As the youngest of his siblings and the only one who was still living at home, Bill had to quit school at an early age to care for his sick father. Consequently, he always stressed the importance of an education to his children and grandchildren.

“He’s still the wisest man I know,” Patsy Meuth, his daughter-in-law, said. “He has so much common sense and he’s always been a good judge of character. He’s wise in the school of life.”

Another celebrant at the party, Bill’s nephew, Virgil Meuth, was quick to point out that Bill is the second of his siblings to reach the 100-year mark. Bill’s sister, Freda Meuth Kadura, lived to be 103. In addition, his brother Richard Meuth lived to be 96 and his brother Anton Meuth lived to the age of 99. 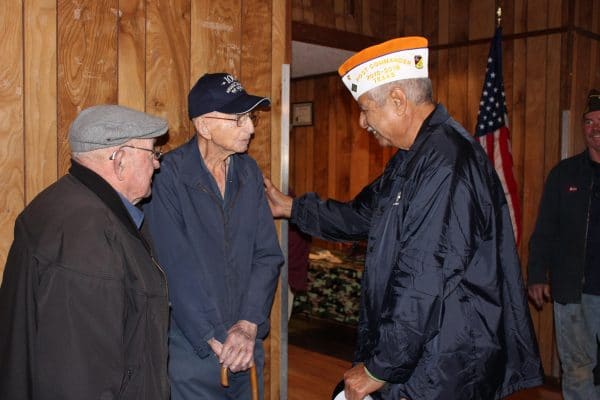 At his 100th birthday party, Bill Meuth, center, received a special recognition from the Caldwell County VFW Post 8927 in recognition of his service in the Army in WWII. [CONTRIBUTED BY PEGGY HANNA/TNS)

Meuth is a longtime member of Sacred Heart Catholic Church in Rockne, where he attends with his son Carl most every week. Besides a hearty breakfast, he enjoys gardening and dominoes, which he plays with his family every chance he gets.

Happy birthday to this inspiring man, who is a true Rockne treasure.