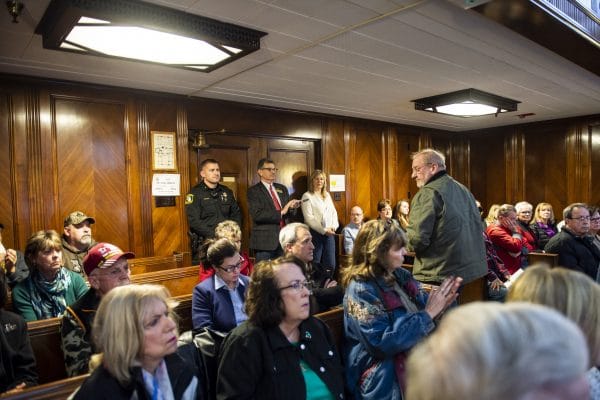 Seats were filled during the Bay County Commissioners meeting in the Bay County building on Tuesday, Feb. 11, 2020. All public comment was about Bay County becoming or not becoming a Second Amendment sanctuary county.
(MLive.com/Kaytie Boomer/TNS)

Several Michigan counties and other municipalities have adopted or considered similar language in recent weeks as part of a national movement signaling opposition to gun control measures. As a “sanctuary,” local governments could signal they don’t intend to enforce any gun laws they consider unconstitutional.

Resolutions are non-binding and do not have a direct impact on existing laws, but can be used by government bodies as a statement of priorities or to declare intentions.

Eisen’s Second Amendment statewide sanctuary resolution was referred to the House Government Operations Committee and hasn’t been taken up. But during a House Judiciary Committee hearing Tuesday, lawmakers heard testimony on a similar resolution from Eisen that would “reaffirm the right of Michigan residents to keep and bear arms.” 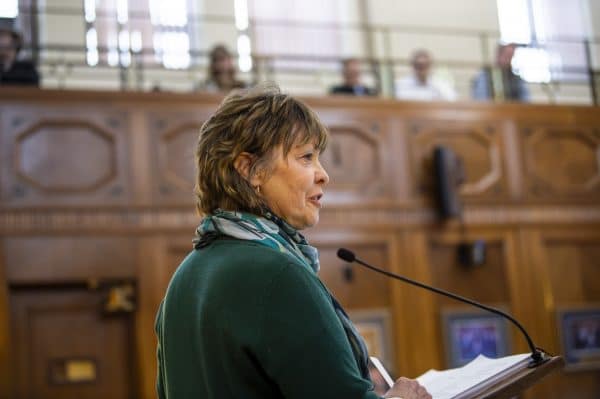 Karen Tighe stands at the podium to speak at the Bay County Commissioners meeting in the Bay County building on Tuesday, Feb. 11, 2020. All public comment was about Bay County becoming or not becoming a Second Amendment sanctuary county.
(MLive.com/Kaytie Boomer/TNS)

“The Michigan Legislature will not pass laws that would infringe upon the ability of Michigan residents to own and keep firearms,” that proposed resolution states, and “will ensure that legislation in violation of our constitutional right to bear arms will not be imposed upon the citizens of Michigan by either the federal government or itself.”

Eisen said his second resolution, House Resolution 227, was meant to address concerns that the word sanctuary was “hijacked” by municipalities around the country declaring sanctuary for immigrants living in the U.S. illegally.

“It’s a good word, but it got kind of turned around with the illegal sanctuary cities and stuff,” he said during the committee hearing.

He told the panel he put the resolutions forward because he is concerned about gun-related legislation proposed in the Virginia state legislature, adding he was also involved in a local effort to pass a pro-Second Amendment resolution in St. Clair County. 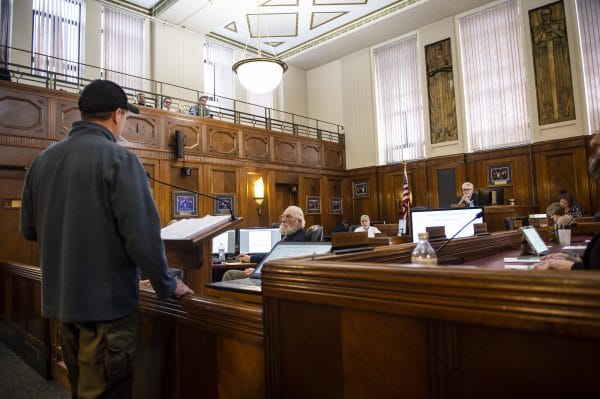 The Board of Commissioners listen to public comment during a meeting in the Bay County building on Tuesday, Feb. 11, 2020. All public comment was about Bay County becoming or not becoming a Second Amendment sanctuary county.
(MLive.com/Kaytie Boomer/TNS)

The effort to pass pro-Second Amendment resolutions picked up steam across the country after gun control legislation began moving through Virginia’s state government, where Democrats recently gained a legislative majority.

The resolutions are generally opposed to any laws the municipality would consider “unconstitutional,” although a common target is “red flag” laws that would let authorities temporarily confiscate someone’s firearms if they exhibit threatening behavior.

Michigan Democrats put forward a “red flag” plan last year, although there’s been no movement on the bills in the Republican-led legislature. One of the lead sponsors, state Rep. Robert Wittenberg, D-Huntington Woods, said when the bills were introduced that they would provide law enforcement and family members “legal recourse to limit access” to guns if a person posed a significant risk.