She fought to survive as a child. Trained as an Olympic wrestler. Now she shows Marines how to fight.

Marine Sgt. Melissa Paul smiles while talking about the impact wrestling has had on her life during an interview at Naval Weapons Station Yorktown on Friday, Jan. 31, 2020. (Kaitlin McKeown / The Virginian-Pilot/TNS)
February 15, 2020 Brock Vergakis - The Virginian-Pilot
Share
Tweet
Flip

Sgt. Melissa Paul is a wrestler who has been fighting all her life.

Fighting through the pain of growing up without a father since she was 4, when hers was sent to prison in Colorado.

Fighting to get an education in Alaska when her drug-abusing mother wanted to her to quit high school and make a living fishing instead.

Fighting to find a safe home when her mother paid a friend to take her off her hands, for a television. 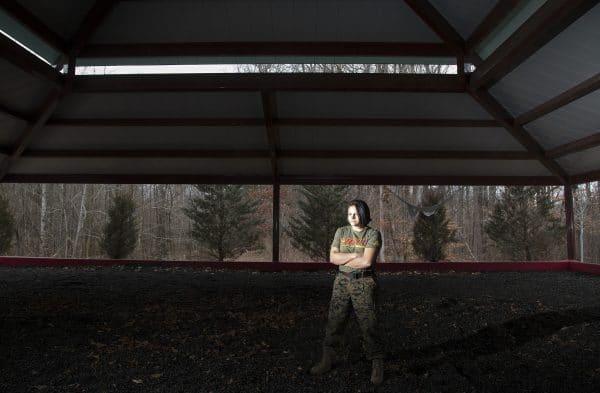 The Marine based at Naval Weapons Station Yorktown who trains martial-arts instructors has been wrestling for as long as she can remember, long before it was common for women to do so.

She had little control over her circumstances, but when it came to wrestling Paul found she could be in complete control. She was dominant on the wrestling mat.

She won competition after competition while she wasn’t sure where her mother was, where her next meal would come from or where she would sleep each night.

Living in a small community near Anchorage, she started sleeping on the couches of her high school teammates, keeping her clothes in a trash bag. 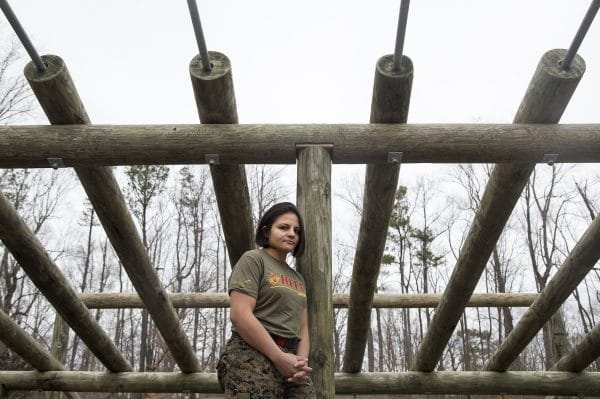 A guidance counselor at her school who was married to a wrestling coach at another school soon learned what was going on. paid other teachers out of their own pockets to take Paul in.

Eventually, they brought her into their home. Paul fought that at first, too. She wanted to be emancipated at 16 because she didn’t want to be a burden on anyone.

But the guidance counselor she now calls mom let her know they would support her and her wrestling dreams.

“She said, ‘God has something planned for you. You’re going to go and wrestle and do something great.’ And so I ended up staying with them, and it was the best decision ever because living with them, I think, I think God kind of put wrestling in my life. Not to be like an Olympic champion, but to kind of make me be the best person I could possibly be. ”

With a stable home, Paul thrived. So much so that she was invited to live and train at the Olympic Training Center in Colorado Springs, Colorado, to compete for a spot on the national team.

But she said no, because she wanted to finally experience what life with a family was like.

When she graduated from high school and turned 18, she decided to pursue wrestling full time and moved to the Olympic Training Center. She became a national champion and took third place in a world competition.

During the 2012 Olympic trials she came just short of making the team, earning a spot as an alternate on that squad.

An ankle injury ended her dreams of making the 2016 squad, but she used the time while she recovered to speak out about child abuse and neglect. She gave speeches and met with and encouraged foster children.

At one camp where she spoke with a group of children, each was assigned a big brother or big sister. Paul found herself brought to tears.

“I talked about how blood doesn’t make you family. People caring about you, and, you know, just being a team makes you a family,” she said.

Upon hearing Paul’s words, a little girl in the crowd looked up at her assigned big sister.

“And she’s like, ‘Oh, so I have a family now.’ And they hugged and they’re crying,” Paul said holding back her own tears at the memory years later. “And, yeah, it was it was an emotional moment. I had to look away and ignore them completely because I didn’t want to cry on stage.”

Eventually, Paul’s injury healed, and the Department of Defense took notice that she still had major wrestling talent.

The military sponsors athletic competitions around the world and was looking to get women involved in wrestling.

Always eager to challenge herself, Paul decided to join the toughest branch she could imagine, the Marine Corps. She became the first woman wrestler in the Marines and only the second in the United States military.

At Yorktown, she trains with Marines who are part of elite Fleet Anti-terrorism Security Teams that go to hot spots around the world to protect embassies and consulates.

In the Marines, she also found she has yet another family where people look out for each other. She wants those she leads at Marine Corps Security Regiment to know she has their back and always will. She doesn’t want to just make better Marines, she wants to make better people.

That’s what family — even a family of fighters — is for.

“All the stuff I went through in wrestling and life wasn’t about me,” she said. “It was so I can touch other people.”