The words of a centuries-old prayer rose in the balmy air and echoed over the graves, hypnotic in the rhythms of ancient Aramaic but no less weighty in translation:

Glorified and sanctified be God’s great name throughout the world.

The kaddish, the Jewish prayer of mourning, had rarely if ever been spoken at this vast American military cemetery in southern Manila, the final resting place of 17,058 U.S. soldiers from the Second World War.

Atop a quiet plateau, the names of young service members who lost their lives in the Philippines and South Pacific, oft-forgotten battlefields of the deadliest conflict in history, are etched on row upon row of identical white marble gravestones — nearly all in the shape of the Latin cross, the symbol of Christianity. 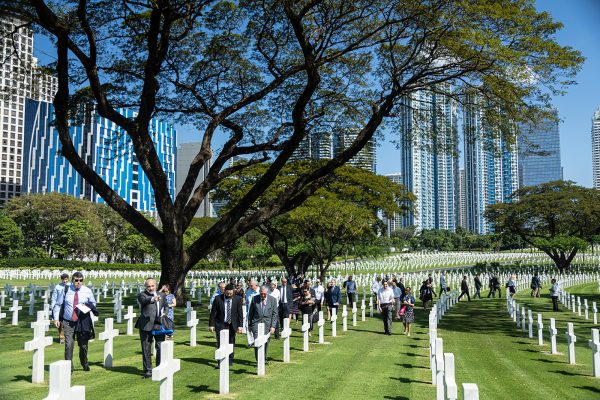 But not all the Americans laid to rest here are Christians.

At least five Jewish soldiers were buried under a cross when they were entitled to a Star of David on their gravestones. Many of their relatives, living halfway around the world, had no idea. The U.S. military blames clerical errors, miscommunication with families or incorrect information in the records of the soldiers, some of whom may have concealed their faith.

The mistakes stood for decades — until a group of Jewish scholars and researchers launched a project to correct the record at U.S. military cemeteries around the world. In solemn ceremonies Wednesday, five crosses in Manila were lifted from the emerald lawns and replaced with Jewish stars.

“Anyone visiting these cemeteries should recognize that Jews have been part and parcel of America, have been committed to America, have loved America, have volunteered to fight for America — and have made the ultimate sacrifice for America,” said Rabbi Jacob J. Schacter, a historian at Yeshiva University in New York and co-founder of the project, Operation Benjamin. 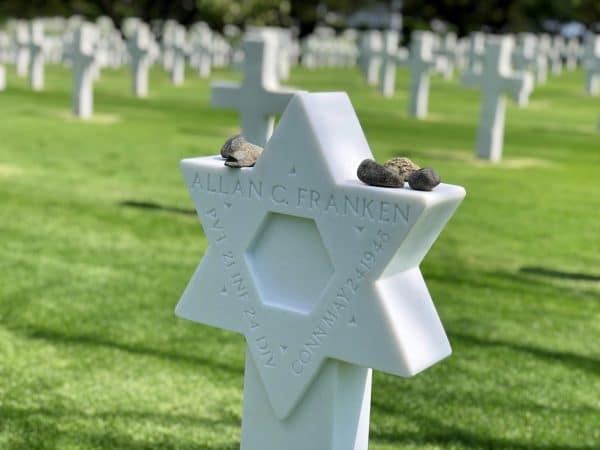 The gravestone of Pvt. Allan C. Franken, a Jewish soldier killed in the Philippines in the final months of World War II, was changed to a Star of David in a ceremony at the Manila American Cemetery on Wednesday, Feb. 12, 2020. (Shashank Bengali/Los Angeles Times/TNS)

Vicki Katz, a lawyer from Torrance, Calif., stood under a broad tree beside the grave of Pvt. Waldman, her great-uncle. Her mother and grandmother had barely spoken of him over the years. Katz eventually learned he’d been captured by Japanese forces and survived the Bataan Death March across the Philippines, only to starve to death at a Tokyo prison camp in 1944.

But no one in the family had seen where he was buried until now.

“My entire family is grateful to Operation Benjamin for giving us the opportunity to get to know Arthur,” Katz told the gathering, “and to honor his service by correctly marking his grave.”

Hands clasped over a blue patterned dress, Katz and her husband, Rich, watched as Philippine cemetery workers hauled away the old gravestone and planted the new one in its concrete saddle, drawing a string atop the star to place it in line with the neighboring crosses.

An Air Force chaplain led the mourners in reciting the kaddish:

Blessed be He, beyond all the blessings and hymns, praises and consolations that are ever spoken in the world.

For soldiers buried in a distant land who never received a memorial service — certainly never a Jewish one — the ceremony restored a connection to their faith that had been lost to history. The star is the physical affirmation, the kaddish the spiritual one.

“Arthur, on behalf of the Jewish people,” Schacter said when the prayer ended, “we are honored to welcome you home.”

Through meticulous genealogical research, Schacter and his colleagues have succeeded in changing the grave markers of 11 Jewish soldiers buried under crosses, and believe there are hundreds more.

The project originated in June 2014, around the 70th anniversary of the D-day landing, when Schacter stood in the heavy stillness of the American cemetery at Normandy, France.

The site held personal significance: His father, Rabbi Herschel Schacter, had served in the war as a chaplain alongside the Army soldiers who liberated Buchenwald, then spent several months tending to survivors of the Nazi concentration camp.

The symmetry of Normandy is designed to overwhelm: more than 9,380 white grave markers stretching in every direction on a bluff above Omaha Beach. Staring down one row, Schacter saw the sharp right angles of the Latin crosses interrupted, here and there, by a smattering of Stars of David.

“It slowly dawned on me that there should be more Jewish stars than there were,” Schacter said. “I just had this kind of a feeling.”

Back in New York, he shared this observation with Shalom Lamm, an entrepreneur and military historian. The official database of Normandy burials didn’t list soldiers’ faiths, so Lamm — a self-described obsessive on such matters — started combing through online photographs of the cemetery.

About 550,000 Jewish Americans fought in World War II, making up 3.4% of the 16 million Americans who served — roughly equal to the Jewish share of the U.S. population at the time. That meant there should have been about 330 Jewish grave markers at Normandy.

Lamm counted only 149. And he found many seemingly Jewish names carved onto crosses.

“I was consumed by a sadness,” Lamm recalled. “I said, ‘Wow, is that a mistake?’ And I wondered how such a mistake could happen.”

The short answer, it turned out, was that gravestone errors were common.

Middle initials, spellings, even dates of death were sometimes recorded incorrectly by military personnel tasked with gathering the bodies of more than 400,000 dead Americans.

There were added complications for Jewish burials. Some Jews who fought in Europe discarded the dog tags that included their religious affiliation — or scratched out the “H,” code for Hebrew — in case they were captured by Nazis. When a Jewish soldier perished, the Army’s efforts to communicate with relatives, many of them recent immigrants, were sometimes stymied by language barriers.

If religion couldn’t be determined, the military “would sort of default to a Latin cross” for burial, Dalessandro said.

Lamm and Schacter knew none of this when they began investigating their first Normandy burial: Benjamin B. Garadetsky, an Army private from the Bronx who was laid to rest under a cross, but whose name suggested he was Jewish.

They found him listed in the records of the National Jewish Welfare Board, a wartime assistance organization. That led to his parents’ grave sites, at a Jewish cemetery on Long Island.

Still, to change a gravestone, the monuments commission requires a request from a living relative. Garadetsky was unmarried and had no children. His sister had changed her name at marriage and was untraceable.

It wasn’t until they took out an ad in a Jewish newspaper that they tracked down a nephew in St. Louis. Backed by Lamm and Schacter’s research, the family filed a request with the commission, which acknowledged the error and, in 2018 replaced the cross with a star.

Operation Benjamin, named for Garadetsky, has succeeded in every marker change it has asked for. Last year, the group helped change the gravestones of two brothers from Los Angeles, 1st Lt. Frank B. Solomon and Sgt. Charles L. Solomon, airmen and Purple Heart recipients who were shot down over Germany and France two months apart.

The commission, for its part, has shown no interest in defending burial decisions made 70 years ago.

“The quality of their research is so good, I just really admire them,” Dalessandro said. “Our sacred duty is to curate the resting places of our fallen overseas … and any time we can correct an error like this, it really means something to us.”

Operation Benjamin remains nonprofit and volunteer-driven, the only paid staff member a professional genealogist. The group decides which burials to investigate, conducts research independently and takes no money from soldiers’ relatives — who are usually surprised to be contacted.

“It was completely unexpected and it was also such a great gift,” said Rabbi John Franken of Baltimore, who came to see his uncle Allan Franken’s Jewish marker installed — the first time anyone from the family had visited the grave.

The son of a German Jewish immigrant, Pvt. Franken volunteered for the infantry and was sent to the Pacific, where Gen. Douglas MacArthur’s forces were fighting to dislodge Japanese troops.

On the Philippine island of Mindanao, Franken’s 24th Infantry Division battled in thickets of hemp trees so dense that, according to one account, “a strong man must fight with the whole weight of his body for each foot of progress.” Army scouts could barely see through the vegetation and sometimes didn’t know they had located a Japanese soldier until they came under machine-gun fire.

It was there that the 20-year-old Franken was shot in the face. He died at a field hospital May 24, 1945 — less than three months before Japan surrendered.

His brother eventually learned he was buried under a cross. But as the decades passed, that knowledge slipped deeper into the family’s consciousness like so much else about the war — a discordant note in a distant, fading tune.

“It was an honest error, but it feels good to finally be rectifying it,” said Rabbi Franken, 52. “There is an idea in Judaism that there is no greater kindness than that of the living to the dead. That feels like what we are doing for these men. It’s the eulogy they never received.”

At day’s end, there would be 171 Jewish headstones among the 17,058 at Manila, home to the largest number of American World War II dead outside the U.S. When it came time for him to address the gathering at his uncle’s grave, Franken’s voice quavered as he took in, for the first time, the cross that was about to be removed.

The star was hammered into place, and the chaplain began the prayer again. Franken closed his eyes, reciting it from memory.

He who creates peace in His celestial heights, may He create peace for us and for all Israel.

And let us say, Amen.

Franken kissed a stone and placed it atop the grave, a Jewish custom of remembrance. Later, he would reflect on the significance of the kaddish at a cemetery of war: It is a prayer of mourning but contains no reference to death, not even a word. It is a paean to God, to the value of life and to the Jewish people.

It is, above all, a prayer for peace.