Pot is a top treatment for veterans’ pain, PTSD; but cost is barrier

But the cost of medical marijuana, which isn’t covered by insurance, is a barrier, even if cannabis is used as an alternative to pharmaceuticals.

Final results from the 2019 Veterans Health and Medical Cannabis Study, which looked at 201 veterans in Massachusetts and 565 respondents nationwide, were presented at the Cannabis Advancement Series held Wednesday at Babson College in Wellesley.

The study, which was done March 3 through Dec. 31, was conducted by Marion McNabb, a public health researcher and CEO of Worcester-based Cannabis Community Care and Research Network; Steven White, professor of management and marketing at University of Massachusetts-Dartmouth; Stephen Mandile of Uxbridge, an Iraq War veteran and cannabis advocate; and Ann Brum, CEO of Joint Venture & Co. 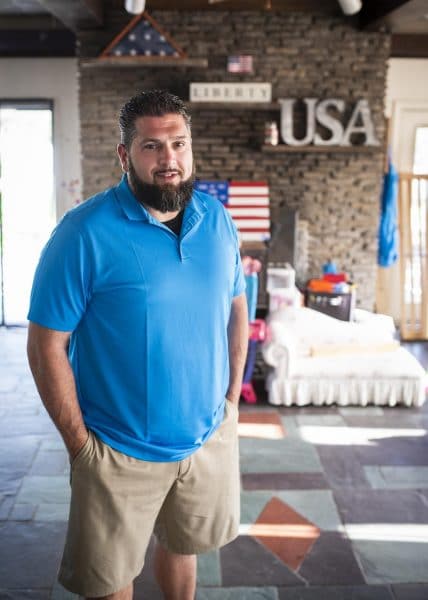 Stephen Mandile of Uxbridge is an advocate for expanded access to medical marijuana for veterans. (Ashley Green/T&G File Photo/TNS)

More than half of the 201 Massachusetts veterans who completed the survey through outreach by veterans groups, social media sites and marijuana dispensaries were age 50 or older. Most, 54%, had served in the Army. The sample was overwhelmingly male, 90%, and 84% were white, non-Hispanic.

Chronic pain, PTSD and anxiety were the top medical conditions facing veterans. Nearly one in three, 30%, of veteran respondents were currently or had been homeless in the past.

A large majority of veterans who responded to the survey reported that cannabis provided relief for their major medical troubles. In fact, 77% reported actively trying to reduce the use of over-the-counter or prescription medications with medical cannabis.

“It surprised me, but it’s not that surprising,” McNabb said about the findings. “They are users and consumers of medical cannabis. They’re really finding relief in medical cannabis use.”

Gruber told the audience that almost everything researchers know about the impact of cannabis on the brain and cognitive functioning comes from recreational users, most who began using the drug as teenagers, while their brain was still developing.

Studies conducted by Gruber and colleagues have found that after three months of treatment, medical marijuana patients demonstrated improved task performance accompanied by changes in brain activation patterns measured in imaging. Further, brain activation patterns after treatment appeared more similar to those in healthy controls, who weren’t using marijuana, than at pretreatment with medical marijuana.

Consistent with the veterans survey, Gruber’s study also found medical marijuana patients reported improvements in how they were feeling and notably decreased use of prescription drugs, particularly opioids and benzodiazepines, after three months of treatment.

Mandile, an Uxbridge selectman, became an advocate for medical marijuana after he was seriously wounded in Iraq while deployed with the Army National Guard in 2005. His Department of Veterans Affairs doctors put him on 57 medications, including nine opioids, over the ensuing decade. In 2013 he attempted suicide.

In 2014, an ultimatum from his wife prompted Mandile to wean himself from prescription drugs by using marijuana, something he accomplished in five months.

He founded a nonprofit organization, Alternative Treatment for Veterans, to raise awareness and work with dispensaries to offer discounts on medical marijuana to veterans who are rated 100% disabled by the VA. The product discounts have been picked up by 11 marijuana dispensaries across the state.

Mandile also testified last week on proposed legislation, H. 4274, filed by state Rep. Michael Soter, R-Bellingham, that would allow veterans to use their VA paperwork to qualify for a medical marijuana card, instead of requiring them to pay hundreds of dollars to get a card from a separate registered health care professional.

The Joint Committee on Cannabis Policy will report on the bill by Wednesday.

Mandile began working with McNabb a little more than a year ago to push for data on veterans’ access to medical marijuana.

“As much as they (legislators) can feel the connection with anecdotal stories,” Mandile said, “they needed something more concrete, more data driven.”

The new survey found Massachusetts veterans spend an average of $79 a week, or $317 a month on cannabis. Nearly three-quarters, 72%, purchase cannabis from regulated dispensaries. About one out of five, 19%, grow their own.

Money to purchase marijuana products and get a medical marijuana card were the top two barriers reported in the veterans survey.

“In the veterans community, we often hear, ‘Thank you for your service,’ ” Mandile said. “This was an opportunity for the Legislature and people of Massachusetts to actually do something to help veterans, more than just a thank-you.”