Pics: Trump salutes 2 Green Berets killed in Afghanistan as they are brought home

The bodies of two U.S. Army Green Berets killed in combat in Afghanistan returned to the U.S. on Monday night, and President Donald Trump oversaw their return.

U.S. Army carry teams at Dover Air Force Base, Del. carries the caskets of Sgt. 1st Class Javier Jaguar Gutierrez, 28, of San Antonio, Texas and Sgt. 1st Class Antonio Rey Rodriguez, 28, of Las Cruces, N.M. off an Air Force transport plane. President Trump was in attendance for the “dignified transfer” ceremony and saluted the caskets of both men as they were carried off the plane. 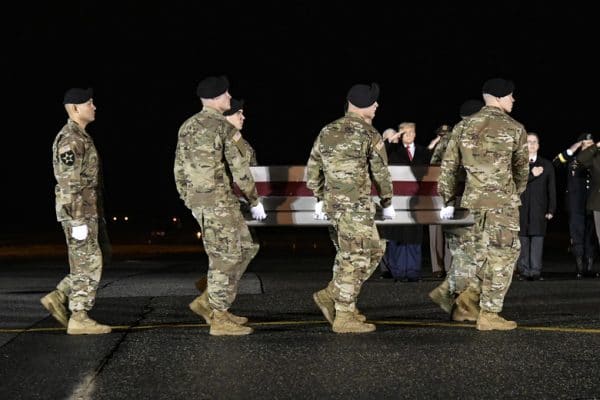 Gutierrez and Rodriguez were members of 3rd Battalion, 7th Special Forces Group (Airborne) based out of Eglin Air Force Base, Fla.

Both men were posthumously promoted to their current ranks of Sergeant First Class and awarded the Purple Heart and Bronze Star for their actions.

Both men died of wounds sustained in combat on Saturday in the Nangarhar province of Afghanistan. Early reports of the attack indicated members of their Green Beret unit were ambushed and engaged by direct fire.

Other U.S. troops were also reported wounded following the ambush.

It remains unclear if the Saturday attack came as the result of Taliban or ISIS-affiliates in the area or if the incident was an insider attack involving Afghan partner forces. The Pentagon indicated in a Sunday statement it is investigating the events surrounding the ambush but has not yet confirmed details.

Trump’s appearance at the transferring ceremony came just hours after he held a planned campaign rally in New Hampshire.

National security adviser Robert O’Brien told reporters that Trump had concluded his rally early to be there for the return of the two slain Green Berets, the Associated Press reported.

“These are terrible sacrifices for the families. And these guys are heroes, they’re real warriors and did a great job for the American people,” O’Brien said. “These are tough times. It’s tough for the president but he thinks it’s important to be there for the families and recognize them.”

O’Brien said seeing the caskets of service members killed in combat is among the toughest things Trump does as president, as is visiting wounded service members at Walter Reed National Military Medical Center.