Some of the thousands of cards and gifts that have arrived for Major Bill White, a 104-year-old Marine, from around the world as part of Operation Valentine. (CALIXTRO ROMIAS/THE RECORD/TNS)
February 14, 2020 Bob Highfill - The Record
Share
Tweet
Flip

It’s hard to imagine anyone having a more heartwarming Valentine’s Day this year than United States Marine Maj. Bill White.

A simple request on social media to honor the 104-year-old Purple Heart recipient and World War II veteran with a Valentine’s Day card turned into a global outpouring of love and support that came to be known as Operation Valentine. 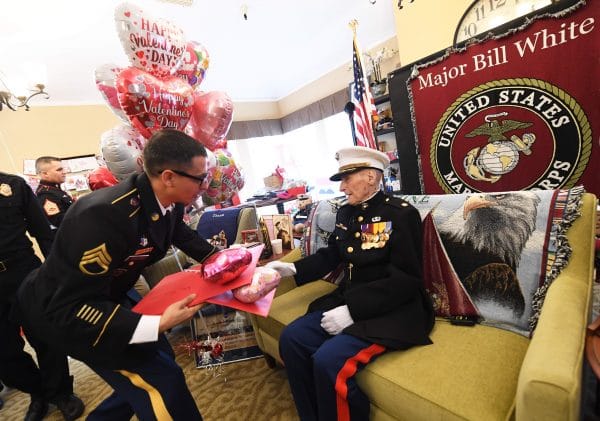 Marine Staff Sgt. Daniel Perales, 38, gives Marine Maj. Bill White two large Valentine’s Day cards with balloons during an open house at The Oaks at Inglewood assisted living facility on Thursday. Thousands of cards and gifts arrived for White, a 104-year-old Marine, from around the world. The global outpouring of love and support that came to be known as Operation Valentine. (CALIXTRO ROMIAS/THE RECORD/TNS)

White’s daughter, Mary Huston, estimates about 300,000 cards, letters and gifts have flooded her father’s residence, The Oaks at Inglewood in Stockton, since fellow Oaks resident Tony Walker’s post on social media some five weeks ago.

On Thursday, dozens of citizens, active military, retired military and law enforcement members visited Maj. White during an open house at The Oaks. The walls were covered with some of the cards and more were stacked on the floor still in their U.S. Postal Service bins.

“We are here because we wanted to reach out to Maj. White and celebrate him,” said Apolonio Garcia, a U.S. Marine reservist and officer with the Stockton Police Department’s Mobile Field Force. “He’s leaving a great legacy so we definitely want to come out here and celebrate him.” 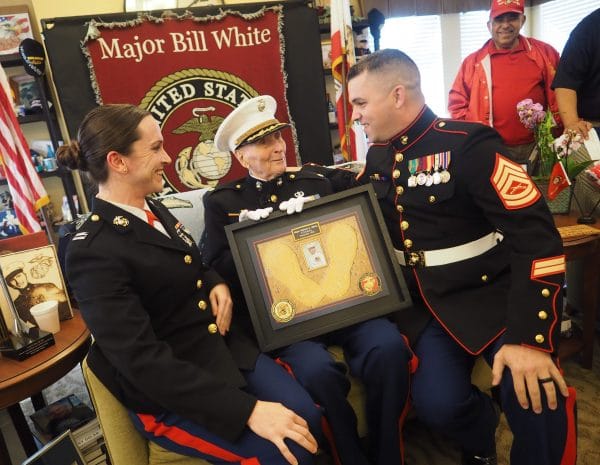 “It’s a major accomplishment to reach 100 but 104 is really unheard of,” Zamora said. “When we heard about what Maj. White was requesting we jumped on the opportunity as soon as we could as a team.”

Maj. White sat in a large chair in The Oaks’ living room wearing his full dress uniform and accepted gifts, proclamations and congratulations. White graciously thanked everyone who came to see him. 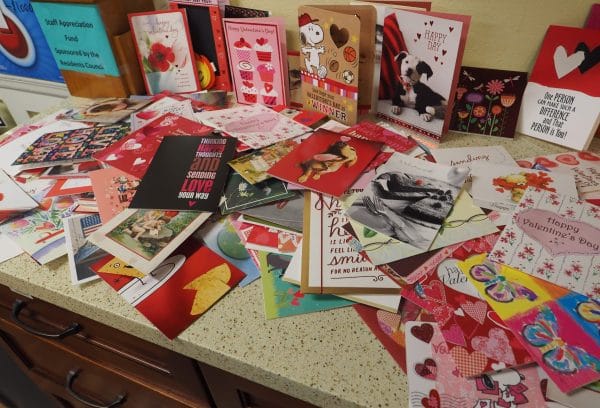 Some of the 300,000 cards, letters and gifts that have arrived for Maj. Bill White, from around the world. The global outpouring of love and support that came to be known as Operation Valentine. (CALIXTRO ROMIAS/THE RECORD/TNS)

Huston stood nearby smiling as she watched her father interact with the large gathering, many of whom waited several minutes in the hallway for the opportunity to offer their respects.

“Still a little overwhelmed, but so proud and so thankful,” said Huston when asked how she felt Thursday. “He’s holding up amazingly well. We’re trying to pace him. He’s appreciative and thankful and honored by all the attention and the thanks he’s received.”

And more letters are pouring in: Huston said on Thursday, 17 bins with 400 to 500 pieces in each arrived at The Oaks. Among the letters Maj. White has received was one from United States President Donald Trump. 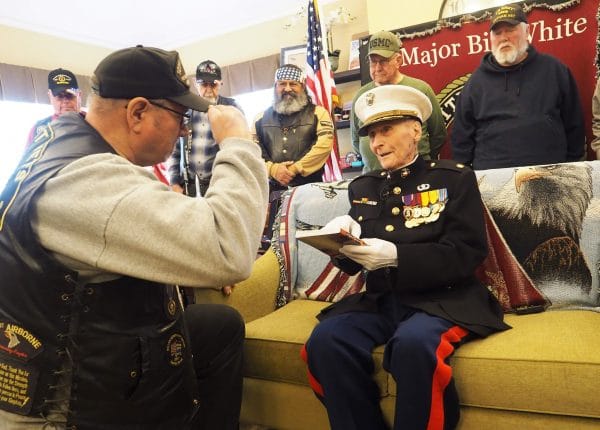 Army Airborne veteran Mark Tury, 72, snaps a salute for U.S. Marine Maj. Bill White and presents him with a book of his experiences in Vietnam during an open house at The Oaks at Inglewood honoring the 104-year-old Purple Heart recipient and World War II veteran after a simple request on social media for Valentine’s Day cards turned into a global outpouring. (CALIXTRO ROMIAS/THE RECORD/TNS)

“Never in my wildest imagination did we think it would end up being something like this,” Huston said. “The outpouring of love and appreciation is incredible.”

Huston said some of the senders expressed intimate details about their lives, their kids and grandkids and what they plan to do when they retire. For some, thanking Maj. White was their way of honoring those in their family who served in the military and now are gone.

“They can’t thank their family members who have gone,” said Huston, “so this isn’t just for him. He’s a representative of all of the veterans and those who have gone before and those that are yet to go.”

Operation Valentine not only brought a lot of attention to Maj. White but also to The Oaks at Inglewood, with loaded mail trucks dropping off payloads and media descending on the quiet, beautiful assisted living facility. Resident Larry Cox, 89, said he hasn’t been bothered by it at all. 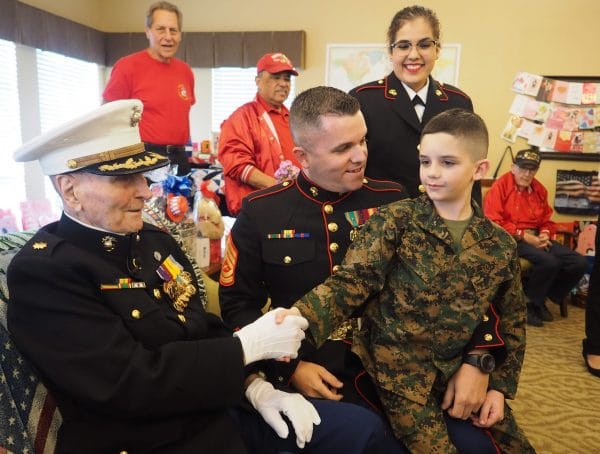 “It hasn’t disturbed us a bit,” said Cox, who served with the U.S. Army in Korea, worked 30 years for the Sacramento Municipal Utilities District and has lived at The Oaks seven years. “Everybody seems to be appreciating all of the publicity. It’s been good news for Stockton.”

Huston said more interview requests are coming in and Maj. White has been invited to take part in the Veterans Tour in Washington, D.C.

“So many people are demanding all his time,” Huston said. “We’ll have to step back and realize he’s 104. It’s been a heavy week. Hopefully, he’ll be able to rest up a little bit.”