CBP announced it stopped a vehicle and seized the ammunition while conducting a search of an outbound vehicle headed for Mexico. CBP said they made the seizure after stopping and selecting a 2007 Honda Accord passing through the El Paso port of entry.

Officers who searched the vehicle found 16 boxes of 7.62 caliber ammunition, with each box carrying 520 rounds, hidden under a blanket in the rear seat and floor of the vehicle. 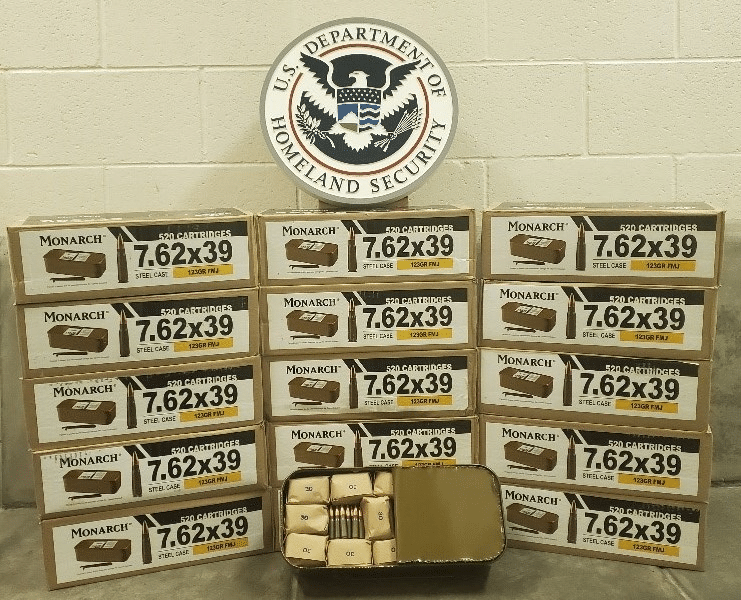 “Our primary focus is checking what is arriving however CBP also conducts outbound inspections to stop the illicit flow of money, weapons and ammunition going south,” said Hector Mancha, the Director of Field Operations for CBP El Paso.

CBP said two females were in the vehicle when it was stopped. The ammunition was seized and CBP reports that an investigation of the seizure is ongoing.

“While anti-terrorism is the primary mission of U.S. Customs and Border Protection, the inspection process at the ports of entry associated with this mission results in impressive numbers of enforcement actions in all categories,” CBP said in a statement.

While President Donald Trump has focused on stopping cartel human and drug smuggling from Mexico into the U.S., the Mexican government has also complained about the flow of arms from the U.S. into Mexico.

Trump has suggested classifying cartels as Foreign Terrorist Organizations (FTOs), following a deadly attack by cartel members on a U.S. family traveling in Mexico in November. At the time, Mexican President Andres Manuel Lopez Obrador rejected the idea of the terror classification and suggested both countries could help prevent cartel violence by stopping the flow of weapons from the U.S. into Mexico.