Speeding with your wife, infant and hundreds of thousands of dollars worth of cocaine in your car is a great idea if you want to attract the attention of law enforcement — which is exactly what happened in this case.

A man driving 85 miles an hour as he careened among cars and lanes during rush hour on Interstate 5 in southern California, his wife and infant son in tow, was arrested Friday after U.S. Customs and Border Protection agents discovered more than 50 pounds of cocaine in the vehicle. 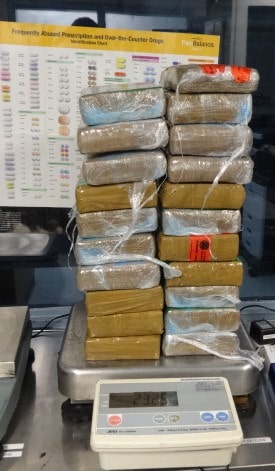 CBP agents discovered 21 packages of cocaine weighing 51 lbs and worth $512,500 inside car with man, his wife and infant on Feb. 7, 2020. (Customs and Border Protection/Released)

The agents pulled over the 34-year-old U.S. citizen, who they did not identify publicly, when they saw him “driving erratically between lanes and around drivers,” KGTV-TV reported. He was in a 2012 Nissan Altima, according to KSWB-TV.

It was about 4:45 p.m. Friday when they followed the driver to San Clemente, a coastal city about halfway between San Diego and Los Angeles, where he continued the frantic driving, the TV station said. He then pulled into a shopping center parking lot, where he and his wife jumped out of the car and walked away at a fast clip.

“Agents approached the couple and asked for consent to search their vehicle,” U.S. Customs and Border Protection said in a statement. “The man agreed, and agents discovered a duffel bag in the car trunk that contained 20 brick-shaped packages of cocaine. Agents also discovered an additional package of cocaine tucked inside a shopping bag near the infant’s car seat.”

While this was happening, the woman said she needed a restroom, and walked into the shopping center with the baby. She never came back.

“Agents later located them a quarter mile away,” CBP said. “All three individuals were taken to a nearby Border Patrol station for further investigation.”

Both the man and his drugs were handed over to the Orange County Drug Enforcement Administration office, and he was arrested, CBP said, adding, “The mother and infant were released. The vehicle was seized by the U.S. Border Patrol.”