Heath Robinson of Pickerington believes his stage 4 lung cancer was caused by exposure to toxic smoke from “burn pits” during his deployment to the Middle East in 2006 and 2007. His wife, Danielle, pictured behind him, says she is focused on taking care of him and being the rock in the family. The couple has a 6-year-old daughter. [Doral Chenoweth III/Dispatch/TNS)
February 23, 2020 Ken Gordon - The Columbus Dispatch
Share
Tweet
Flip

Flashing a gap-toothed grin, 6-year-old Brielle Robinson bounced up on the couch and draped herself around her daddy’s shoulders.

Heath Robinson, 38, also smiled, but such moments have been scarce for him lately.

The man who once was a fit and driven soldier — he was twice named Non-Commissioned Officer of the Year by the Ohio Army National Guard for his physical prowess — has been devastated by stage 4 lung cancer.

It’s a disease that the Pickerington man blames on his exposure to toxic smoke from “burn pits” — burning trash dumps — during his deployment to the Middle East from September 2006 to September 2007.

Chemotherapy has left Robinson pale and drawn and down 25 pounds, from 180 to 155. 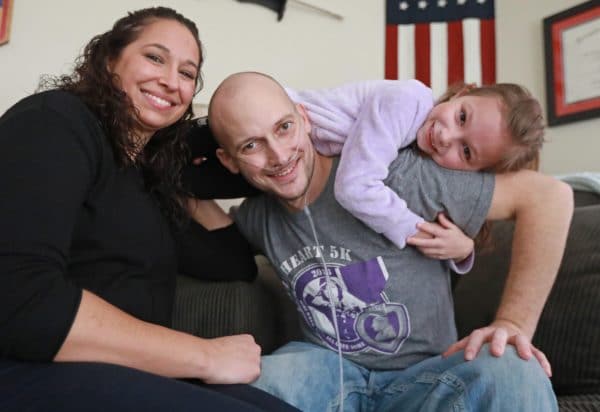 Heath Robinson can only spend a few minutes a day playing with his 6-year-old daughter, Brielle, because of his rare form of stage 4 lung cancer. His wife, Danielle, joins them here. [Doral Chenoweth III/Dispatch/TNS)

“I’m on so many medications right now it makes me irritable, and I’m always tired,” Robinson said. “(Brielle) is a little ball of joy. She wants to play and she wants to romp, and I just don’t have the energy for it.”

He paused for a moment, the quiet broken only by the hiss of the oxygen tank to which he is tethered.

When he resumed, his voice quivered. “And it’s hard, because I want to play with my daughter.”

It is not normal for a healthy nonsmoker in his 30s to get non-small cell adenocarcinoma. Robinson’s doctor told him the only way he could have contracted it was by being exposed to toxic substances.

Robinson and his wife, Danielle, theorized that his cancer likely was caused by his burn-pit exposure.

The pits operated for years at dozens of military bases in the Middle East.

Robinson, a sergeant first class, recalls seeing and smelling the smoke from football-field-size burn pits at the sprawling Victory Base Complex near Baghdad. 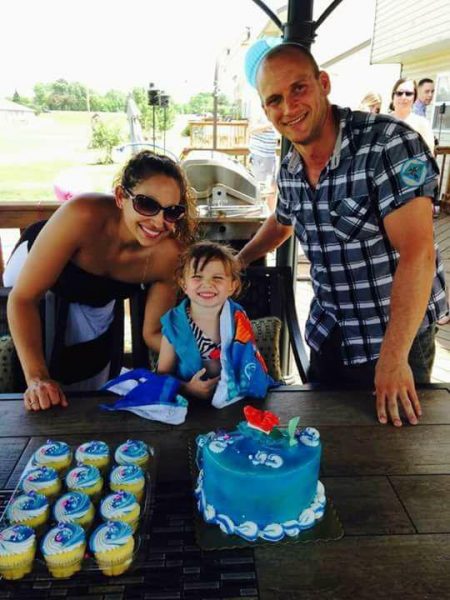 “It was just an open pit the Army would use to get rid of anything — trash, feces, computers, rubber tires,” he said. “Anything you could think of, they would just throw it in there, throw diesel fuel on it and burn it.”

Since the mid-2000s, thousands of veterans have complained of a range of illnesses, including various cancers and a rare pulmonary disease called constrictive bronchiolitis that they blame on burn-pit exposure.

The Department of Veterans Affairs estimates as many as 3.5 million veterans may have been exposed to airborne toxins since 9/11.

In 2014, the VA started the Airborne Hazards and Open Burn Pit Registry for veterans to report their possible exposure. As of Feb. 5, the VA said, 195,237 veterans had signed up. By registering, those affected can document their exposure, schedule an exam and learn about follow-up care.

Robinson thought nothing of his toxic exposure when he first returned home. A combat medic in Iraq, he remained on active duty and burnished his reputation as an exemplary soldier.

“His overall attitude is the epitome of what you want your enlisted leadership to be,” said Capt. Riley Binks, who worked with Robinson in the 285th Medical Company (Area Support) from 2011 to 2015 at the Defense Supply Center Columbus in Whitehall. “He would prepare himself not only physically, but he has a mental toughness about him that is not easy to come by.”

Robinson and Danielle, who had been dating since 2006, got married in 2013, the same year Brielle was born.

Robinson was a fitness fanatic. At his peak, he said he could bench press 315 pounds, squat 400 and run two miles in under 12 minutes.

He was training for a half-marathon early in 2017 when he began feeling weak and tired.

Initially, he was diagnosed with a rare autoimmune disease, mucous membrane pemphigoid. But a month later, in March, came the devastating news: lung cancer that had already spread to his bones and elsewhere.

Doctors gave him four to eight weeks to live.

“So I went from thinking that I was going to get my mucous membrane pemphigoid fixed and get back to working out (and) active duty, to, `You’ve got cancer and your military career is finished,'” he said.

His immunotherapy drug, Keytruda, worked wonders, though. For more than two years after his diagnosis, Robinson remained in reasonably good health.

Meanwhile, his commanders kept him on active duty as long as they could, “dragging their feet,” he said, because if he died his family would get much better benefits than if he died after being medically retired.

Not wanting to jeopardize those benefits, Robinson stayed quiet as the issue of burn pits began to grow into a national scandal.

A 2016 book (“Delay, Deny, Hope You Die”) and a related documentary drew attention to the issue, as well as the fact that the VA in many cases denied disability claims because it did not accept that the illnesses were related to burn-pit exposure.

In November, though, Robinson was medically retired. At the same time, the Keytruda stopped working, and Robinson’s doctors now have him on chemo.

Robinson’s medical care is almost fully paid by the military’s health insurance, called Tricare. And in his case, the VA has granted him a 100% disability claim.

But he now is speaking out for others not so fortunate.

“It sickens me that there are so many people out there that just because they didn’t have the resources that I have and they weren’t active duty … They don’t get the same benefit and they’re having to jump through hoops,” he said.

Robinson said one infusion of Keytruda costs $40,000, and he needed treatments every few weeks.

In recent years, there has been some progress made.

Both the Department of Defense and the VA say they are taking the issue seriously. The two organizations are jointly sponsoring several studies about the possible health hazards of burn-pit exposure.

“The health and well-being of our service members is the top priority of the Department of Defense,” a spokeswoman said in a statement. “The Department is concerned that toxins from burn-pit emissions may pose health risks and is assessing long-term impacts on service members.”

On the legislative side, no fewer than eight bills addressing the issue have been introduced in Congress since January 2019. Most would make relatively minor changes, such as dealing with eligibility for certain VA services or allowing family members to update the burn-pit registry to add cause of death.

Ohio Sen. Sherrod Brown is among legislators taking up the cause. He successfully pushed for a public hearing in front of the Senate Committee on Veterans Affairs in September.

Getting a hearing in itself was considered a victory, as it gave the issue more exposure.

Brown also was among those who worked to get a measure requiring more airborne-hazard screenings and evaluations of veterans who may have been exposed to airborne toxins into the National Defense Appropriations Act, which President Donald Trump signed into law in December.

Brown gave some credit for his education on the issue to Robinson’s mother-in-law, Susan Zeier, of Sandusky. She has been an impassioned activist ever since Robinson was diagnosed.

“Advocates like Susan help inform and remind us all about the issues facing service members, veterans, and their families,” the Democratic senator said. “I will continue pushing Congress to do the right thing and ensure our service members have the care they need.”

There also have been some setbacks. In January 2019, the U.S. Supreme Court rejected an appeal in a class-action lawsuit filed against KBR Inc., the company contracted by the military to take care of trash disposal overseas.

Robinson is not sure what his future holds. He is hopeful that chemo will buy him time and perhaps his doctors can find another immunotherapy drug that will work as well as Keytruda once did.

A physical therapist, Danielle said she has been focusing on “this lifestyle of, you know, you have to take care of your husband, you have to be the rock and the strength of the family now.”

Despite his illness, her husband harbors no bitterness. Still the model soldier, Robinson is grateful for the relationships and personal growth he gained from his military service.

He simply wants to see other sick veterans get the help they need.

“I don’t regret that service,” he said. “I just wish that this could be different with the burn pits and people being held accountable.”