Eleven people were killed in shooting incidents on Wednesday night in the German town of Hanau near Frankfurt in what Bild newspaper said may have been a right-wing extremist attack.

The news prompted immediate soul searching in a nation gripped by concerns about the rise of the far right, which is upending the traditional political order in Europe’s biggest economy and disrupting the final stages of Angela Merkel’s four-term chancellorship.

Nine were killed in two separate incidents, while the suspected perpetrator and another person were found dead at a nearby home, police said in a statement. An investigation into the identities of the suspected killer and the victims is continuing, they added. The federal prosecutor has taken over the case, DPA reported, a sign of the gravity with which authorities are treating it. 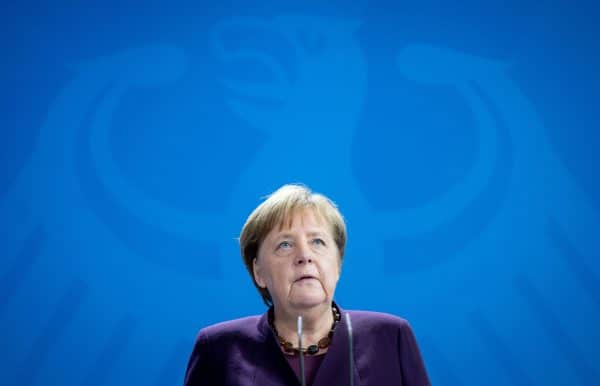 20 February 2020, Berlin: Federal Chancellor Angela Merkel comments on the attack in Hanau in the Federal Chancellery. In Hanau, Hesse, 11 people were killed by gunfire. The Attorney General’s Office is investigating. (Kay Nietfeld/picture alliance via Getty Images/TNS)

The suspect, whom Bild identified as Tobias R., left behind a video and a letter, in which he refers to the “extermination of certain peoples” who Germany is unable to deport, the paper said. Some of the victims were of Kurdish origin, Bild added, without naming the source of its information.

The initial shots were fired at the “Midnight” shisha bar at the Heumarkt in the town center at around 10 p.m. local time, local media reported. After entering the bar’s smoking area, the shooter fired wildly at guests, killing five.

Police and emergency service are seen behind a police cordon near a bar in the centre of Hanau, near Frankfurt am Main, western Germany, on February 20, 2020, after at least nine people were killed in two shootings late on February 19.  (Thomas Lohnes /AFP via Getty Images/TNS)

The next incident was around 2 kilometers (1.2 miles) away at the “Arena Bar & Cafe” in the Kesselstadt neighborhood. The corpse of the suspected shooter, who was thought to be acting alone, was later found in his apartment, also in Kesselstadt, along with that of another person, police said. Bild said the second victim was the killer’s mother.

“Our thoughts are with the people of Hanau this morning, in whose midst a dreadful crime was committed,” Chancellor Angela Merkel’s chief spokesman, Steffen Seibert, said in a tweet. “Our deepest sympathies are with the affected families, who are mourning their dead. We hope that the injured quickly recover their health.”

Germany has relatively strict gun controls, but has suffered shooting attacks by lone gunmen before. In March 2009, a 17-year-old school pupil in the southern town of Winnenden shot dead 15 people before killing himself during a gunfight with police.

In 2016, a teenage gunman went on the rampage in Munich, shooting dead nine people at a shopping mall before turning the gun on himself after a siege lasting several hours.

In October last year, a heavily armed man attempted to storm a synagogue in the eastern Germany city of Halle on the Yom Kippur holiday and killed two people nearby in a suspected anti-Semitic attack that authorities blamed on the far right.

The Hanau shooting comes at an extremely delicate juncture in German politics, with the far right on the rise and Merkel’s grip on power weakened. She took an accepting stance on refugees at the height of the Syria crisis that has come at a price.

Hanau is also close to where a regional lawmaker from Merkel’s CDU party was gunned down last year in a suspected right-wing extremist slaying.

For the last two weeks, the country has been in crisis after Merkel’s party aligned with the far-right Alternative for Germany in a vote for premier in an eastern German state. The fallout from that led to the resignation of Merkel’s heir apparent from her post as party leader and a chaotic process to replace her.

Merkel canceled a planned trip to Halle Thursday and is monitoring the situation, Seibert said.

Known as the birthplace of the Brothers Grimm, Hanau is about 20 kilometers east of Frankfurt, Germany’s financial center, and has around 100,000 inhabitants. In the 2017 general election, the AfD scored 14%, making it the third-strongest party after Merkel’s CDU and the Social Democrats.

Local lawmaker Katja Leikert, a member of Merkel’s bloc in the Bundestag, said in a tweet that the shootings are a “horrific scenario for us all.”

“On this terrible night in Hanau, I send those close to the victims much strength and my heartfelt condolences,” Leikert added.