While a former MIA soldier’s remains are finally home, at peace in a Gaston County cemetery, his Army uniform now sits in a Gastonia museum, a reminder of the price of freedom and one family’s enduring spirit.

The U.S. Army Class A uniform is proof of the amazing tale of Cpl. Earl William Duncan and his family’s unending quest to return his remains from a war-torn hillside in North Korea to Gaston Memorial Park, where he now rests.

The uniform, which sat in Duncan’s casket on the day of his memorial service in late November, is now modeled in a corner of the American Military Museum that is devoted to items from the Korean War. 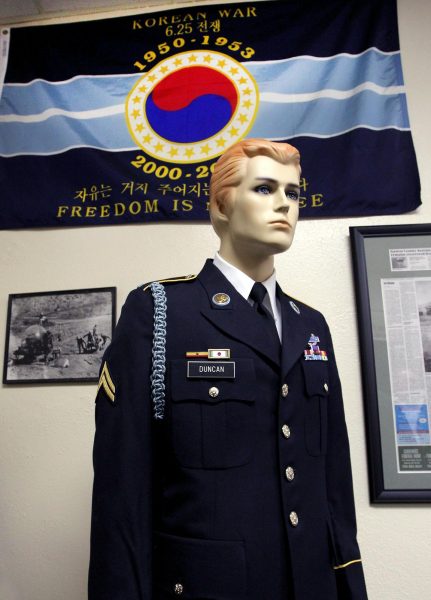 Duncan’s Army service uniform, complete with his rank and various medals, shares a room with the uniforms of other Gaston County veterans, dating from the Vietnam War through Desert Storm.

It’s the Duncan family’s hope that the uniform and accompanying framed Gaston Gazette story will generate discussion and awareness and provide hope for families of soldiers missing or killed in action.

“The day that we put my brother in the ground was two days short of 70 years (from when he was killed in action),” Howard Duncan said. “We had just about given up.”

“There are thousands of families right now just like we were,” he said. “Hope. Don’t give up.” 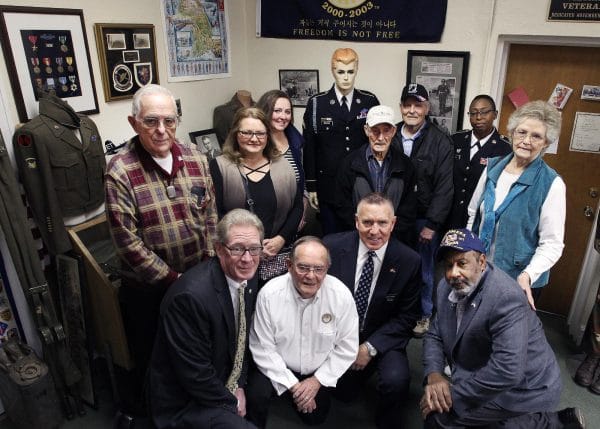 According to members of the POW/MIA advocacy group The Ride Home, in November there were 1,527 service members from North Carolina who were listed as Missing In Action. Of those, 1,302 were World War II vets, 186 Korean War servicemen and 38 from Vietnam.

Elsie Loftin, the only girl among the seven Duncan siblings, said the family was presented with several options on what to do with Earl’s uniform following his memorial service in November, but they all agreed donating it to the local military museum made sense.

“We didn’t want it to go into just the ground or one of us take it and stick it in a stuffy chest somewhere,” she said. “This is perfect.”

Her granddaughter, Dana Marston, said the uniform is beautiful to her because “that’s a way to always have his story be told.”

On Dec. 2, 1950, Duncan’s Army infantry company was in the vicinity of the Chosin Reservoir in present-day North Korea when his unit was attacked by enemy forces. 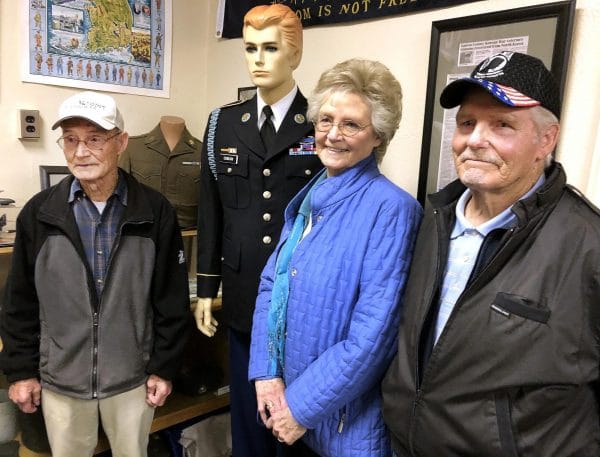 Cpl. Earl Duncan’s family – Sam Duncan, Elsie Loftin and Howard Duncan – stand next to his uniform that they donated to the American Military Museum in Gastonia. Duncan’s remains were recently returned from Korea nearly 70 years after he was killed in action. (MICHAEL BANKS/THE GASTON GAZETE/TNS)

Duncan was part of the “Home By Christmas Offensive 1950” that involved 3,000 soldiers and found them fighting four days and five nights in the harshest of conditions with temperatures falling to 35 degrees below zero.

He was reported missing in action after the battle ended because his remains could not be recovered. Duncan would be declared dead on Dec. 31, 1953.

Earl Duncan, who was 23 when he was killed, was not the only Duncan brother to serve in the military. His younger brother, Sam, who was in attendance at Thursday’s ceremony, was drafted and served two years, 1953-54, in the Army, fighting in Korea. Elsie’s husband, Leonard, was also drafted and served from 1956-57.

In the ensuing years after Duncan’s death, no new information about his remains materialized. As the decades passed, questions remained unanswered.

But on July 27, 2018, following a summit a month earlier between President Donald Trump and North Korean Supreme Leader Kim Jong-un, North Korea turned over 55 boxes, purported to contain the remains of American service members killed during the Korean War.

Using anthropological and DNA analysis, as well as circumstantial and material evidence, scientists were able to identify Duncan’s remains from one of those boxes.

The family was notified on Sept. 10 and his remains arrived in Gaston County on Nov. 23. His remains were buried on Nov. 30 following a memorial service that attracted hundreds.

Scotty Teague is a member of the Gaston County Veterans Council and also works for Carothers Funeral Home, who handled the service and arrangements for the Duncan family.

Standing Thursday beside the uniform, Teague said, “It’s an honor to have that part of history here so others can see.”

Sitting adjacent to Duncan’s uniform is an American flag that was donated by Sgt. 1st Class Nicole Bell, a military escort based in Charlotte who accompanied Earl Duncan’s body and has assisted the family throughout.

Jim Mayo, director of the museum, said Duncan’s uniform is a great addition.

“We’re lucky to have this,” he said. “People don’t realize that freedom is not free.”

The museum is housed in Memorial Hall, a building dedicated in 1930, that has always served veterans.

In fact, Howard Duncan said that when he received his draft papers, one of the first places he had to report to was the very building where his brother’s uniform now sits.

While he would never be called to serve, Howard Duncan remains thankful for all veterans, a message he told the local veterans gathered at the museum Thursday.