Nine years after Larry Murphree’s battle over the right to plant an American flag in a pot outside his condo began, he got to make his same argument to a trial judge.

Murphree, an Air Force veteran, first put a 12-inch by 17-inch flag in a flower pot by his front door in defiance of homeowners association rules in 2011.

He began incurring a $100-a-day fine, which reached $1,000. He filed a federal lawsuit in 2012, and then he signed a settlement agreement with the homeowners association that waived his fines and granted him $4,000 in legal fees. In exchange, he agreed to not disparage the association and to display the flag according to the association’s “reasonable rules and regulations.” 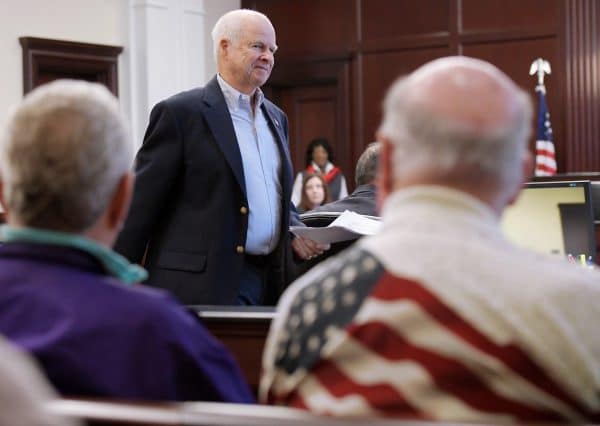 Larry Murphree heads back to his seat after answering questions on the witness stand during Monday morning’s trial at the Duval County Courthouse. Several spectators in the gallery wore flag themed clothing in support of Murphree, a Jacksonville Air Force veteran who was in court in an attempt to end a nine-year battle with the homeowners association at his former Del Webb condominium over his display of the American flag. (Bob Self/Florida Times-Union/TNS)

Almost immediately, a condo association, which is a separate entity but employs the same property managers to oversee the same properties, passed a new “flower pot rule” that prohibited anything other than plants, dirt or water being put into flower pots, including flags. Murphree again incurred a $100-a-day fine, and the association placed a lein on his house.

He filed another federal lawsuit, based on the federal Freedom to Display the American Flag Act of 2005, which made it illegal for associations to ban the display of the Stars and Stripes. However, a federal judge dismissed Murphree’s federal lawsuit in 2014, saying that law didn’t give the ability to sue to enforce the law. That judge told Murphree that his claims would be be “best addressed by the state courts.”

All the while, Murphree granted interviews to media outlets, like The Times-Union, criticizing the association for refusing to let him put a flag in a flower pot.

Eventually, the homeowners association filed a lawsuit in 2014 against Murphree, saying he violated the non-disparagement agreement. He countersued, demanding $1 million in damages. 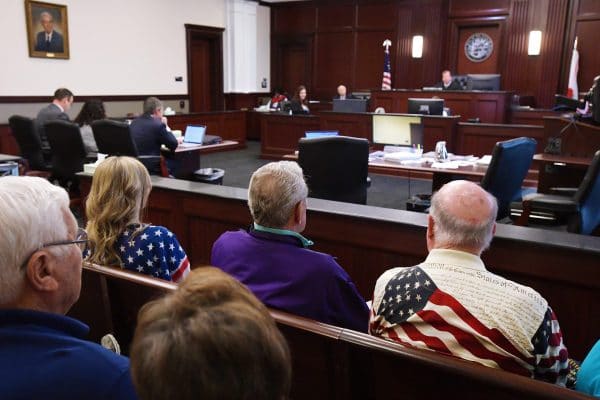 On Monday, Murphree and the homeowners association each presented their case to Circuit Judge Robert M. Dees, who won’t make a decision on the lawsuit and countersuit for at least another month while the two sides present their final arguments in writing.

After his initial settlement, could the association change its rules to again prohibit the flag in a flower pot?

And did that settlement bind the other legal entities at Sweetwater including the condo association?

However, Nick Martino, lawyer for the homeowners association, said there was nothing in the settlement that would’ve prohibited the association from stopping Murphree from putting a flag in a flower pot.

Martino pointed out that Murphree knew he was moving into a deed-restricted community with limitations enforced on its owners.

Murphree said when he moved in, no one had flags flying at the community. Now, he said, many people do fly flags on poles; however, he said he didn’t want to deal with a larger flag attached to a pole that he would need to bring in at night. Instead he wanted a smaller flag in his flower pot, as well as several in a wreath on his door.

Martino asked Murphree questions about remarks he made, particularly one quote he gave to Fox News. “I would think if anybody on that [association] board told me they served in the military, I’d have to ask them which side.”

Martino repeatedly objected to Murphree’s lawyers questions, noting the distinctions between the homeowners association that has sued Murphree and the condo association that made the flower pot rule.

Hollis expressed frustration that the community had many flags flying but that outsiders perceived it as anti-patriotic. “It was bad to watch this sweet, amazing community that supports the flag be dumped.”

She described “being in a situation where my staff is scared to come to work because of the amount of death threats we received.”

Dees asked the two sides to prepare final arguments in writing and for them both to draft proposed orders for him.

Murphree now lives at Cascades at World Golf Village, and he said he has had no problems planting flags in flower pots there.