‘Experience is worth nothing unless you share it,’ former Green Beret says

On Sept. 25, 2011, Sgt. Kevin Flike, then 27, landed in the Faryab Province in Afghanistan as the sun was rising. He was seven months into his second deployment there and working a valley-clearing mission alongside his fellow Green Berets and Afghan commandos. Just a few hours later, the trajectory of his life dramatically shifted when he was shot in the stomach by enemy fire.

Flike is alive to tell the tale and share his experience, which he did last week at Hingham High School during two back-to-back talks with the 1,300-student body, and to the general public in an evening program on Jan. 30. The school’s principal, Richard Swanson, emphasized the rarity of such an occasion in his opening remarks. 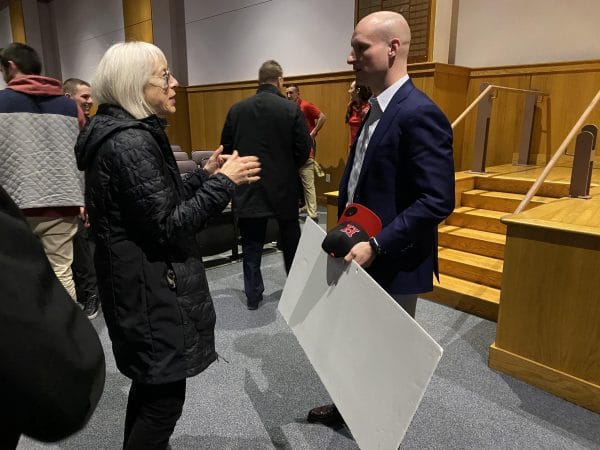 A woman is one of the first in line to speak to Kevin Flike after he gave a talk on Thursday evening at Hingham High School, Jan. 30 (Anastasia E. Lennon/The Patriot Ledger/TNS)

Before Flike took the stage for a question-and-answer session, he screened his 35-minute documentary about his path to the military, the life-changing moment of his injury and the different roads he took through recovery and beyond.

Some images were graphic, including live footage from a teammate’s helmet camera that showed Flike lying prone and receiving medical attention while awaiting medical evacuation by helicopter. Flike recounts that he didn’t know if he’d survive. Many of his teammates had approached him with tears in their eyes.

The bullet struck his colon and a major nerve, which resulted in paralysis of his left leg. After undergoing emergency surgery in a medical tent, he woke up in a German medical center four days later with his stomach still open. Months later, he would undergo an experimental surgery at the Mayo Clinic to bring motor use back to his paralyzed left leg. His recovery was more painful than getting shot, he said, and yet he wouldn’t give up either experience.

“People don’t really believe it when I say this, but getting shot and going through everything I went through was the absolute best thing,” said Flike. “It’s given me clarity on what I want out of life, a sense of purpose. … I feel blessed to have been picked to walk this journey.”

He said he made this documentary to inspire others and teach them about what the Green Berets are, what they do, and what they stand for.

“The Green Beret Foundation was there for me at my bedside, helping me out, helping my wife throughout the entire time without any questions asked,” Flike said. “It would be selfish not to share this experience. Sharing is a way for me to thank all the people who helped me. … Experience is worth nothing unless you share it.”

During his visit to Hingham High, he certainly inspired the school’s Veterans Appreciation Club, which surprised him with a check of $750 for the Green Beret Foundation. The students raised the money themselves and shared an intimate lunch with Flike during the school week.

Since leaving the military, Flike has received two graduate degrees from MIT and Harvard, and now works at a cybersecurity firm in Boston. He is on his way to accomplishing a goal he initially set out to complete for the one-year anniversary of getting shot: run a marathon.

“This year on Patriots Day, I’m going to finally fulfill that goal, 3,130 days after being shot, to run the Boston Marathon,” he said.

Flike now resides in North Weymouth with his wife, Kimberlee, and his two daughters, Everly and Lilah. The talk was made possible by the Hingham Education Foundation and the Hingham Sports Partnership. To learn more about the Green Beret Foundation, for which Flike is a board member, visit greenberetfoundation.org.