James Derry, 99, a World War II veteran who served as infantry soldier with the Army in the Anti-Tank Company 242nd Infantry, Rainbow Division, recently talked about his experiences during an interview at his home in Salt Springs. [Doug Engle/Staff photographer/TNS)
February 01, 2020 Andy Fillmore - The Florida Times Union
Share
Tweet
Flip

He also had a brush with a miracle as he dealt with the horrors of war.

Derry, recipient of the Combat Infantryman Badge, was with the 242nd Infantry Regiment, one of three 42nd Division regiments that swept across France and Germany to free many towns from Nazi oppression during 1944 and 1945.

As Derry, now 99, looked over a 42nd Division WW II history book and map during a recent interview, he said he would “never forget” his wartime experiences. 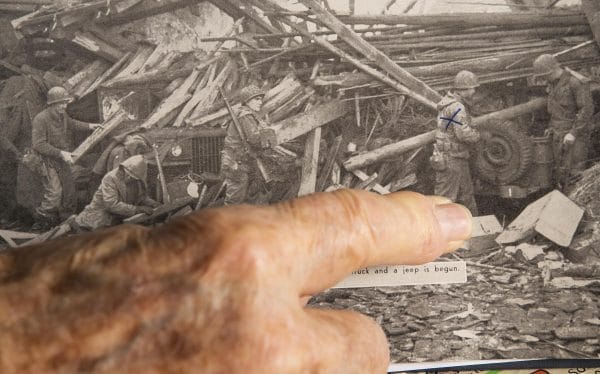 Derry was born Feb. 5, 1920, in Buckeystown, Maryland. He quit school in the seventh grade after being “wrongly accused” by a teacher in an incident he can’t recall. He went to work on the family farm, which grew sweet corn, hay and wheat.

Before he was drafted on Aug. 4, 1943, at age 23, he lived in Woodsboro, Maryland, where he drove a truck before working for Eveready, which made defense-related materials, such as landmines and floats, for the Navy.

Derry joined active service on Aug. 25, 1943, and was trained for an anti-tank gun company. Due to his truck driving experience, he also drove a six-wheel-drive truck to haul guns. 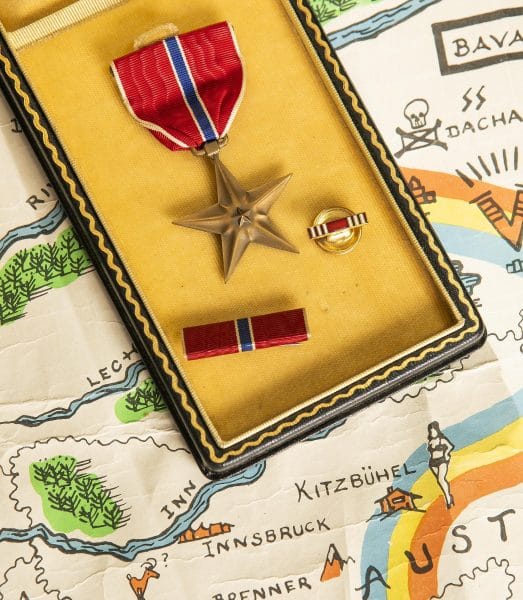 James Derry was awarded the Bronze Star after stringing a chain of explosives across the road as two German Tiger tanks approached him while he was in a Jeep being shot at near the Austrian town of Kitzbuhel. “I dream more about it (WWII) now than I did when I first came back,“ he said recently.[Doug Engle/Staff photographer/TNS)

Derry has a “Trail of the Rainbow” map showing the route of the 42nd Division through Europe and naming the battles, landmarks and historical encounters the troops had from Marseilles to Munich.

During World War I, the 42nd Division was comprised of National Guard units from across the U.S. and named the “Rainbow Division” by the late five-star U.S. Army Gen. Douglas MacArthur because, the general said at the time, the division would stretch across the U.S. like a rainbow.

Derry was awarded the Bronze Star for his “courage and devotion” and “heroic achievement” during an engagement on Jan. 9, 1945, near the towns of Hatten and Rittershoffen, according to the citation for the award.

The citation states that during an attack by two German divisions, “Corporal Derry, driver of a quarter ton truck, made four trips between the two towns under heavy artillery fire and mortar fire.

“On one trip Corporal Derry transferred a number of fused anti-tank mines from Rittershoffen to Hatten in time for them to be used to stop a (German) tank attack” and “contributed effectively to the defense of the two towns,” the citation states.

“On the way he drove in front of enemy tanks and received several holes in his vehicle from shell fragments. Finally, he drove to Hatten, left his truck under cover, crawled forward to meet the regimental commander and then drove him to Rittershoffen,” the citation reads.

He said that although he did not see the survivor, word spread among the 42nd Division troops about a Polish man who was found alive in one of the boxcars.

“When the soldiers opened one rail car, a hand went up from among the dead bodies,” Derry said.

The division visited Berchtesgaden in Austria, site of one of Hitler’s residences, on May 8, 1945.

Derry commented on the “big rooms and hallways” and large wine cellar at the residence, seen in a tour shortly after the war ended.

Derry was separated from the service on Jan. 5, 1946, at Fort George G. Meade, Maryland, after serving two years, five months and two days.

Gail Christman, a friend, said she thinks Derry has “done well” in light of the trauma of war.

“I dream more about it (my war experience) lately,” Derry said.