The U.S. Air Force is putting $13.5 million toward cleanup at the former Wurtsmith Air Force Base in Oscoda, according to a letter released by U.S. Sen. Gary Peters.

The Feb. 25 letter outlines spending to investigate and clean up PFAS chemicals at Wurtsmith and the former K.I. Sawyer Air Force Base near Marquette this year. Both bases are contaminated from the military’s use of a chemical-based firefighting foam called AFFF.

The money comes from a year-end government spending bill called the Further Consolidated Appropriations Act of 2020, which gave the U.S. Department of Defense an additional $60 million for PFAS cleanup at closed bases. The Air Force got $48 million of that, per the letter, which was sent to Peters by Barbara Barrett, secretary of the Air Force. 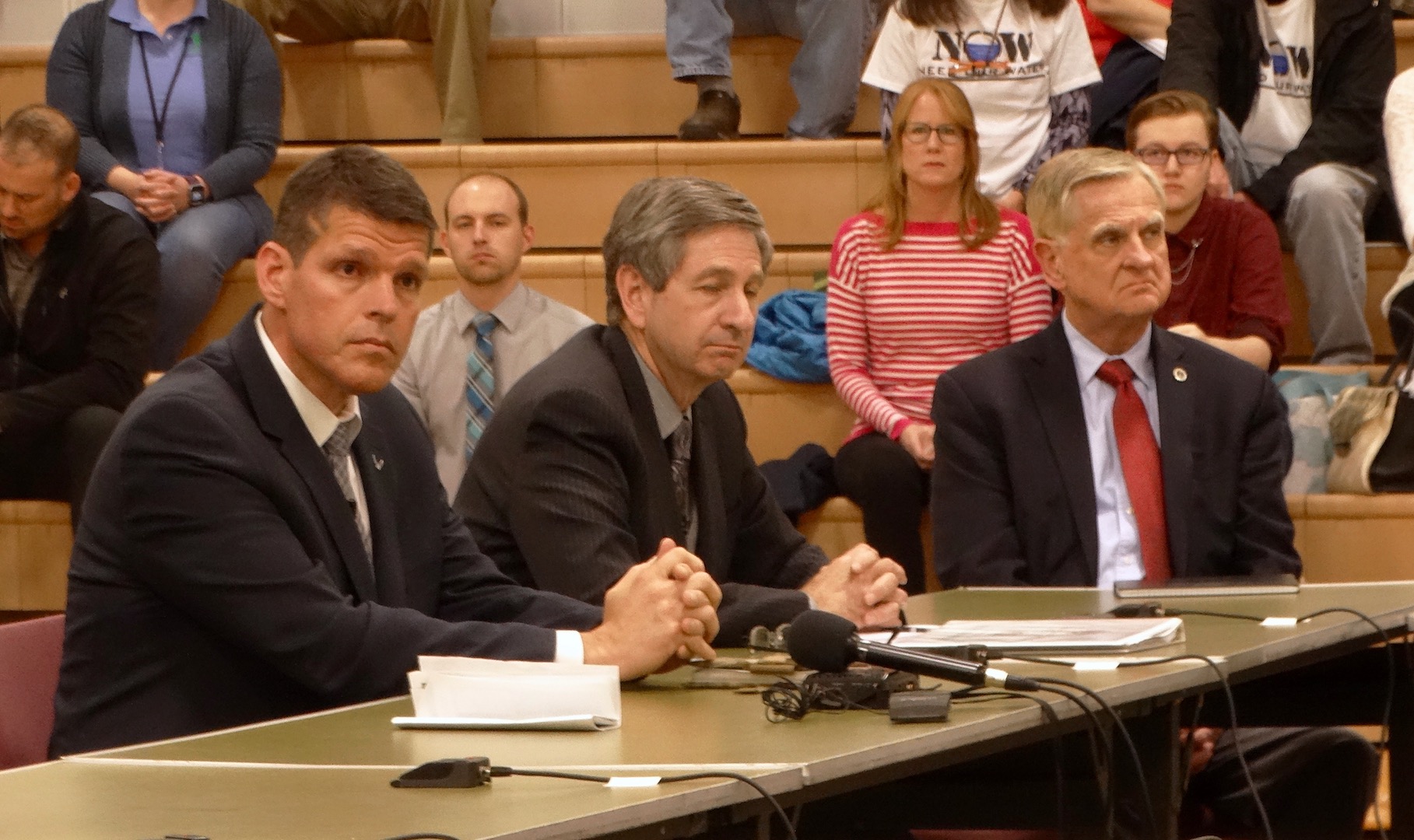 The money for Wurtsmith will nearly double the total spending on PFAS there to date. According to the letter, the Air Force has spent $14.23 million investigating contaminants and installing two activated carbon filtration groundwater filtration systems through 2019.

The Air Force has estimated total cleanup at the base would cost about $251 million.

Nine members of Michigan’s Congressional delegation, all Democrats, signed a letter in January urging Air Force leadership to prioritize the two bases this year, noting that President Trump’s budget request only put $1.5 million toward Wurtsmith and $4.5 million toward K.I. Sawyer.

The subsequent funding should inject some speed into a slow-moving remedial process that’s caused mounting frustration and anger among local Oscoda residents. The chemicals have polluted local lakes, rivers, drinking water and wildlife. 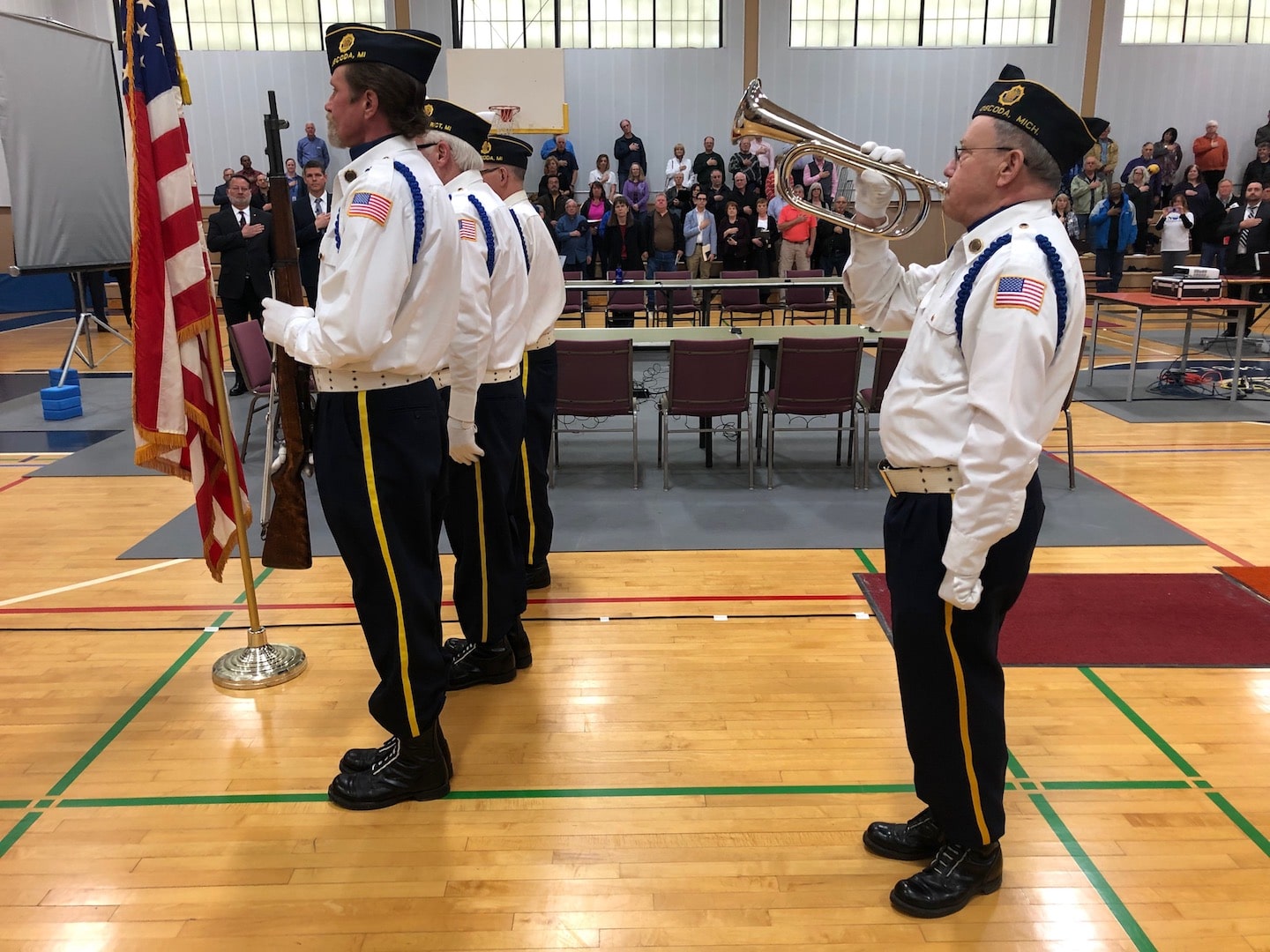 Color guard at a public meeting about Wurtsmith Air Force Base pollution held in Oscoda on Wednesday, April 24, 2019. John Henderson, assistant U.S. Air Force secretary overseeing installations and environment, visited Oscoda on an invite from U.S. Sen. Gary Peters, who recently rebuked the Air Force for its posture in a dispute with the state of Michigan over PFAS cleanup. (MLive.com/TNS)

“I don’t see any commitment to do any interim remedial actions, but with $13.5 million, they ought to,” said Tony Spaniola, a Troy attorney who owns a family cottage on Van Etten Lake across from the township beach, which is regularly beset by toxic surface water foam.

The money will help “expedite the remedial investigation” at Wurtsmith by a year, according to the letter. That investigation phase was expected to begin this year and take 18 months.

The Air Force is following the rigid “CERCLA process” — remediation shorthand for regulated steps the military follows when investigating pollution. Local activists have accused the Air Force of intentionally moving slowly through certain steps in the process and not taking interim actions where possible. 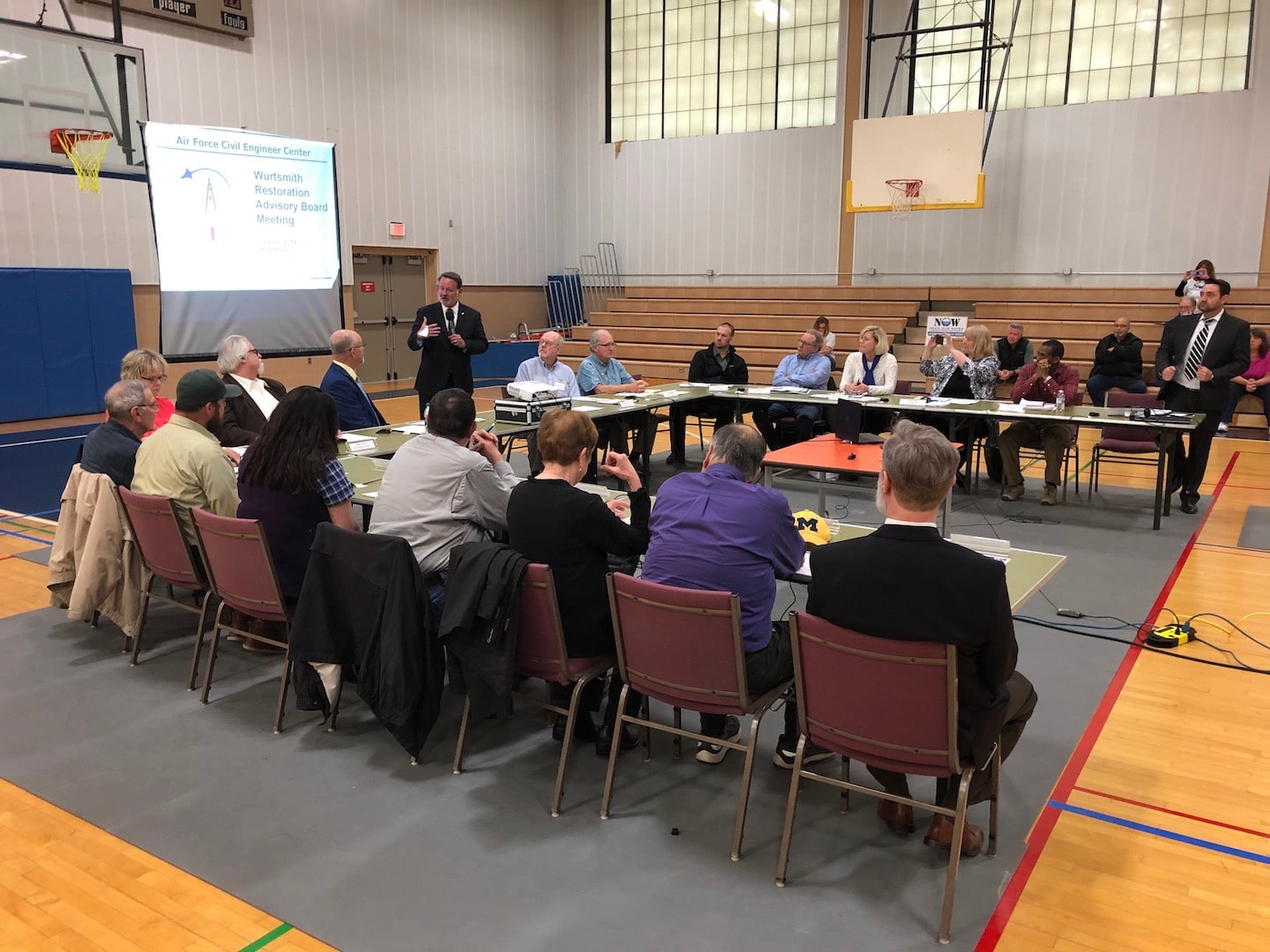 In July, the Michigan Department of Environment, Great Lakes and Energy (EGLE) reached a non-binding agreement in which the Air Force said it would complete an Expanded Site Inspection (ESI) by the end of 2019 and begin the remedial investigation shortly after that. That report has been completed and is under review.

The deal was blasted as “propaganda” by upset locals, who say little has actually been accomplished since PFAS was discovered at Wurtsmith by state regulators in 2010.

Michigan and the Air Force have been in formal dispute talks since late 2017 over cleanup in Oscoda. The legal dispute occurs under an obscure federal grant program called the Defense and State Memorandum of Agreement (DSMOA).

The dispute has centered around the Air Force’s compliance with a low, 12 part-per-trillion (ppt) limit on the individual compound PFOS in surface water. The Air Force has argued that it’s immune from state laws and can ignore the rule until a later stage in the remedial process when it’s required to consider applicable state laws.

Attempts to invoke sovereign immunity from state laws got the attention of Sen. Peters, who rebuked the Air Force and helped spur a visit from top officials last spring.

“When I brought Assistant Air Force Secretary Henderson to Oscoda last year, the message was clear: The Air Force must do more to cleanup PFAS contamination that has devastated the Oscoda community,” Peters said in a statement Thursday. “I joined my colleagues in pressing for more funding at Wurtsmith because Michiganders deserve answers and actions. This funding is an important step towards stopping the continued spread of PFAS contamination from the former base and reducing PFAS exposure in the community. I’m going to continue pushing for additional action and federal resources to address this crisis.”