Mount Vernon residents attend a funeral Saturday for Dwight Claxton at Emmanuel Episcopal Church. Claxton, a homeless veteran whose body was found Jan. 17 at a restaurant entrance, was known by many in the community. (Kim Hairston/Baltimore Sun/TNS)
February 04, 2020 Lillian Reed - The Baltimore Sun
Share
Tweet
Flip

More than 100 mourners and family members filled Mount Vernon’s Emmanuel Episcopal Church on Saturday for a memorial service honoring Dwight Claxton, a homeless veteran and beloved figure in the neighborhood.

Claxton was found Jan. 17 by police huddled in the entrance of a neighborhood restaurant. Friends said he died of “being homeless in America.” He was 53 years old.

The Navy veteran’s death sparked an outpouring of grief and regret among Mount Vernon neighbors, who flocked to social media to share colorful memories and piece together funeral arrangements.

Some of Emmanuel’s congregants had been friendly with Claxton, who slept many nights on a nearby Charles Street stoop. March Funeral Homes donated its services and a burial plot for the man. 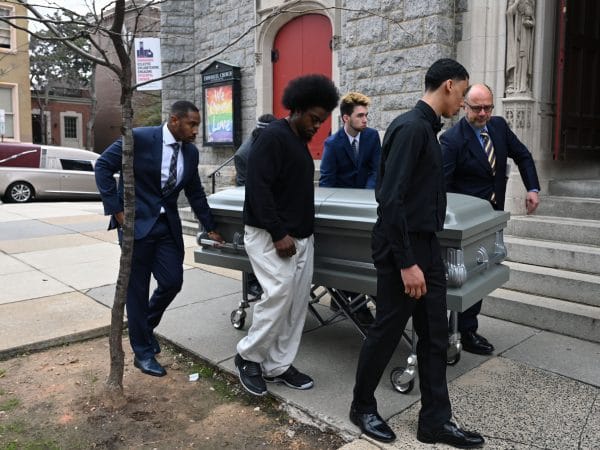 However solitary Claxton’s death may have appeared, his memorial service drew dozens of people representing a diverse range of ages, races and backgrounds.

Young people shuffled into pews, some with skateboards in hand. Fellow veterans saluted Claxton’s casket as it was carried up the center aisle of the church. And alumni of the nearby Baltimore School for the Arts arrived from faraway states to pay their respects.

Claxton’s mother and siblings were touched to see how many people’s lives were touched by him, his sister, Esther Claxton-Nesbitt, said following the service.

“We’re not surprised,” she said, as her brother had always been a fun-loving and outgoing person. “It’s just hard,” she said with tears in her eyes.

Claxton was born the eighth of nine children on Halloween 1966 in the U.S. Virgin Islands’ St. Croix to Rose Adina Claxton and George Hubert Claxton. His father died when he was 7 years old, Claxton-Nesbitt wrote in the memorial service program.

Many mourners remembered how Claxton could often be heard throughout the central Baltimore neighborhood praying loudly to “Jehovah.” Others shared stories of times when the veteran doled out sage counsel — or simply offered up his own faith when a friend had lost his or her own.

“Dwight was a prophet and he was our protector.” the Rev. Anne Marie Richards, Emmanuel’s rector said.

“Let me tell you something about the Dwight that I knew. Dwight was a prophet and he was our protector,” the Rev. Anne Marie Richards, Emmanuel’s rector, said at the beginning of the funeral sermon. “He was a teacher of life.”

In 1983, Claxton moved to Worcester, Massachusetts, and enlisted in the U.S. Navy. He was stationed on the aircraft carrier USS Dwight D. Eisenhower, where he dreamed of learning about planes and aspired to be a pilot. He also enjoyed working with computers, pursuing and receiving certification in computer repairs, according to the program.

Over the last two decades, Claxton lived in Virginia and Maryland, where he made many friends, the program states.

Married couple Christian Gott and Nirajan Khakurel’s German shepherd, named Baby, never failed to catch Claxton’s attention on their daily walks around the neighborhood for the past five years. “She used to bark at him, but he didn’t care,” Khakurel said.

Claxton was also remembered for being friendly with students who attended school in Mount Vernon. During the sermon, Richards shared a friend’s anecdote about how Claxton carried in his pocket a worn school paper a student once wrote about him.

Baltimore School of the Arts graduates Juquon Cannon and Julian Owens stood with friends on the sidewalk outside the church and laughed about how Claxton used to rap with the boys in the park after class.

“He was always around,” Cannon said. “We’d get out of school and just talk and rap. I asked him about his homelessness and how he got to that space. He’d never go into detail, but he’d tell us how we could avoid it.”

The 22-year-old regretted not doing more to help Claxton find stability in his life, he said.

“I feel like I failed him,” Cannon said. “The fact that you see this many people come out for [the memorial service], I feel like we could have helped Dwight.”

Still, Owens recalled Claxton’s habit of assuaging passersby who apologized for not being able to donate some spare change for a veteran.

A big smile would spread across the man’s face as he’d repeat, “Don’t be sorry, don’t be sorry.”