Left to Right: Jeff Huse, 67, a survivor of the sinking of the U.S. Coast Guard vessel Blackthorn on January 28, 1980, hugs Sam Flores. Flores' brother, William Flores, helped save crew members when the ship capsized. The ship collided with the SS Capricorn as it was leaving Tampa Bay. William Flores was one of 23 Coast Guard crew members who died. He was honored with a statue Monday at the U.S. Coast Guard Sector, St. Petersburg. (SCOTT KEELER/TAMPA BAY TIMES/TNS)
February 02, 2020 Kirby Wilson - Tampa Bay Times
Share
Tweet
Flip

St. Petersburg \u2015 When officials commemorate an act of heroism, or a tragedy, or both, they almost always cite the numbers.

On Monday, it was the number 40. That’s how many years it’s been since the Coast Guard suffered the worst peacetime tragedy in its history.

And 23: the number of lives lost aboard the Coast Guard Cutter Blackthorn after it collided with a passing 605-foot oil tanker in the waters of Tampa Bay. 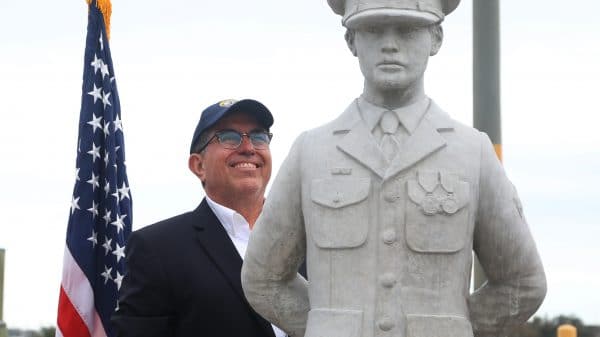 And, perhaps most poignantly, the number 18. That’s how old Seaman Apprentice William Flores was when he heroically went down with his ship. As the Blackthorn capsized, Flores stayed aboard, throwing life jackets to his fellow seamen. He allowed even more jackets to float to escaping crew members by propping open a locker door with his own belt.

Then, the 180-foot cutter sucked Flores into the depths of Tampa Bay.

“He drowned about 15 feet away from me,” remembered Jeff Huse, a survivor of the Blackthorn. “I probably floated with one of the life jackets that he tossed out.”

Huse was just one of dozens of Coast Guardsmen and women who gathered Monday to celebrate Flores’ heroism and to honor the lives lost. (On Tuesday’s anniversary, the Coast Guard will remember the tragedy with its own event.) As local politicians and members of Flores’ family looked on, Brighter Future Florida, a local nonprofit founded by former Congressman David Jolly, unveiled a concrete statue of Flores for its Circle of Heroes underwater monument off the coast of Clearwater. 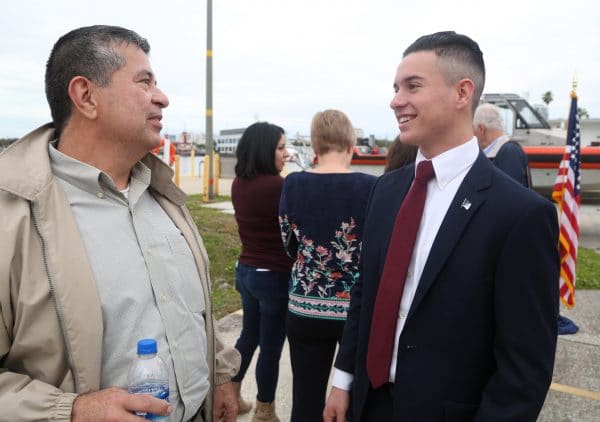 Left to Right: Richard Flores of Arlington Texas talks with his son, Bobby Flores during a ceremony Monday, Richard Flores’ brother, William Flores, was honored with the unveiling of a statue and honored for saving some of his fellow shipmates January 28, 1980. The U.S. Coast Guard ship Blackthorn capsized after colliding with the tanker Capricorn.
(SCOTT KEELER/TAMPA BAY TIMES/TNS)

One day, his group hopes to include 24 statues in total, Jolly said. For now, the number is 13. Flores’ statue is the first in the monument to resemble a particular person.

A freak set of circumstances led to catastrophe on the evening of Jan. 28, 1980. At least one of the passing Capricorn and Blackthorn ships was too close to the center of the channel near the Sunshine Skyway bridge. As the Blackthorn headed out to Galveston, Texas, and the Capricorn in toward Weedon Island, lights from a nearby cruise ship may have made it difficult for the two ships’ crews to see each other until it was too late. And even once the crews did spot one another, an inexperienced Blackthorn officer failed to properly communicate with the Capricorn. All of that is according to two government reports. 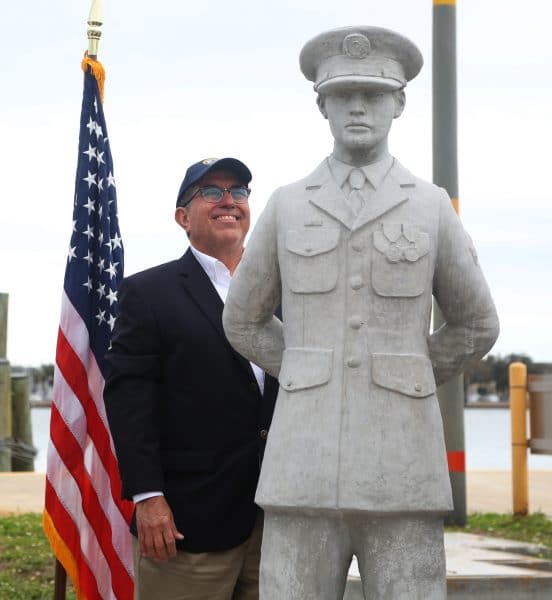 Sam Flores admires a new statue of his late brother, William Flores, Monday, January 27, 2020 at the U.S. Coast Guard Sector, St. Petersburg. The statue honors William Flores who helped save fellow crew members on the US Coast Guard vessel Blackthorn when it sank leaving Tampa Bay after colliding with the tanker SS Capricorn on January 28, 1980. Twenty three crew members died when the ship capsized including William Flores. The ship is now an artificial reef for recreational diving and fishing.
(SCOTT KEELER/TAMPA BAY TIMES/TNS)

Even given all of those factors, the initial collision between the two ships wasn’t catastrophic. The vessels hit almost head-on, with the Blackthorn running down the port side of the much larger tanker. (No one on the Capricorn was harmed.)

It was the Capricorn’s 13,500-pound anchor that sealed the Blackthorn’s fate. It tore into the cutter’s hull, then pulled the ship down. Water began gushing into the Blackthorn. On board, chaos. After less than ten minutes, the vessel was sunk, 23 of its crew of 50 lost.

Although some accounts of the disaster say Flores wore a life jacket himself, his body was found without one, his brother Sam Flores said. Perhaps he gave his own life preserver to a colleague in need.

Eighteen is how old Flores’ nephew Bobby Flores is now. He doesn’t remember hearing very much about Uncle Billy growing up, even though his family hung a picture of him on the wall.

Before Monday’s ceremony, Bobby Flores read about the Blackthorn on Wikipedia. He talked with his family about the account of Larry Clutter, who served with his uncle on the Blackthorn. For years after the accident, Clutter pushed for the Coast Guard to honor Flores.

Richard Flores, one year older than Billy, has seen his son Bobby, a high school senior in Texas, grow older than his heroic brother. It’s a surreal fact made stranger by Bobby and Billy’s striking resemblance.

So how does Richard Flores feel about seeing his son follow in William Flores’ footsteps?

“There’s some anxiety when I think, ‘He’s going off to boot camp. He’s going to come back a man,’” Richard Flores said. “But I put it in God’s hands. He’s going to take care of him.”

IF YOU GO TO TUESDAY’S EVENT:

These are the people who lost their lives in the disaster: