As Charles Allen Jr. celebrated his 100th birthday on Saturday in Round Rock, the U.S. Air Force veteran reflected on his time as a bombardier and his work in the logistics engineering industry.

A native Texan, Allen grew up in Huntsville. He was attending Texas A&M University when Japan attacked Pearl Harbor in 1941. That same year, he made his first attempt to enlist into the military. 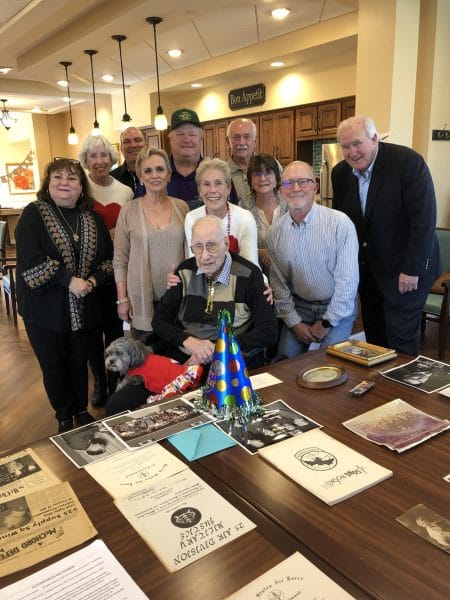 Charles Allen Jr. is surrounded by family during his birthday party on Jan. 18. They laid out photos on the table from his career in the U.S. Air Force and with the Boeing Company and Texas Instruments. [PHOTO BY DEANA TRAUTZ] (TNS)

“I thought that at a certain time, I was sure to be drafted, so I better make up my mind and do something I thought I might like to do,” he said. “So I went ahead and joined the Air Force.”

The U.S. Army Air Corps — which developed into the U.S. Air Force in 1947 — denied Allen due to poor vision. But Allen remain determined, heading home to his work in Liberty Hill and doing all he could to improve his eyesight.

“We have a family story that we share with people when we talk about our military life,” said Allen’s daughter, Elizabeth Willis. “He always told us that he had to come home and eat tons of carrots and then he turned around and went back for his physical and passed it and join the Army Air Corps.”

A year after joining the Air Corps and going through the aviation cadet program, he graduated from the advanced bombardier school and was commissioned as a second lieutenant.

He received crew training in Wyoming before being assigned to the 68th Bomb Squadron for 30 missions. Although Allen expected to be done after these, his missions were increased to 35 after flying during D-Day in 1944.

Throughout World War II, he flew in missions through France, Belgium and Denmark. While dropping bombs on Germany, Allen said he faced aggressive attacks from the German Air Force.

Although his planes were never shot down, he said every mission involved its array of gunfire. Allen recalled one particular mission when flak from German aircraft caused major damage to his plane.

His planes typically contained two fighter pilots, a navigator and himself — the bombardier. Allen inspected bombs on the plane and ensured they were fused correctly before dropping them on a target.

“Your friends could be killed. There are airplanes being shot at and it’s a very unpleasant situation,” Allen said. “There is no sense of victory or anything like that. I just feel thankful in retrospect that I made it.”

After completing all 35 missions in 1944, Allen returned to the states to begin pilot training. The military then sent him to Japan before the Korean War.

“It turned out I was a natural aviator anyway and had no trouble with flying, which gave me a lot of confidence,” Allen said.

While in Japan, he was assigned to escort the esteemed General Douglas MacArthur safely to and from South Korea for an interview. He also completed two missions during the war.

With missions in various countries throughout his career, Allen’s family traveled with him and made a home in Japan, Taiwan and several U.S. states.

“We became a close-knit group who had adventures at every turn,” Willis said. “Not only enjoying the discovery of new and exciting places, my sister and I often had the opportunity of developing and trying out different personalities as we went to a new school each year. We had a great life.”

In 1950, he was sent home to Corpus Christi after coming down with rheumatic fever — a rare disease that causes inflammation to the heart, blood vessels and joints.

But the sickness didn’t end his career. He began training future pilots in the U.S. to fly jets and took the role of base supply officer in Las Vegas and Tacoma, Washington.

During his 22 years of service in the Air Force, Allen retired as a lieutenant colonel and command pilot. He retired in 1964, accepting a logistics engineering position with the Boeing Company, where he helped develop oxygen systems in Saturn rockets prior to Apollo 11.

After his time at Boeing, he worked in the logistics engineering industry with Texas Instruments until retiring in 1985.

Back on their Huntsville homestead, Allen built his family’s dream home, spending much of his time tending to its beautiful gardens.

Last weekend, family celebrated Allen’s 100th birthday at a retirement home in Round Rock where he lives.

With thorough documentation, a keen memory and a knack for storytelling, Allen has over the years provided his family a sense of how his life has unfolded in the past 100 years. The general theme is gratitude for how far he has come.

“I lived a very lucky and exciting life, and I am just thankful that I made it,” he said.