“This is an exciting day in the White House,” Trump said as he welcomed the team.

“Your football program has inspired countless fans across the country,” he added.

“This is a player-driven program,” Orgeron said. “It’s about the men behind me and the men in front of me. You guys did it, you guys set out with a plan, last year Jan. 17 that you were going to win the National Championship. You never talked about it, you went about it through hard work and dedication and you did it and I’m so proud.”

The team presented Trump with a number 45 “Trump” jersey, and Trump invited the team to take photos in the Oval Office behind the Resolute Desk. 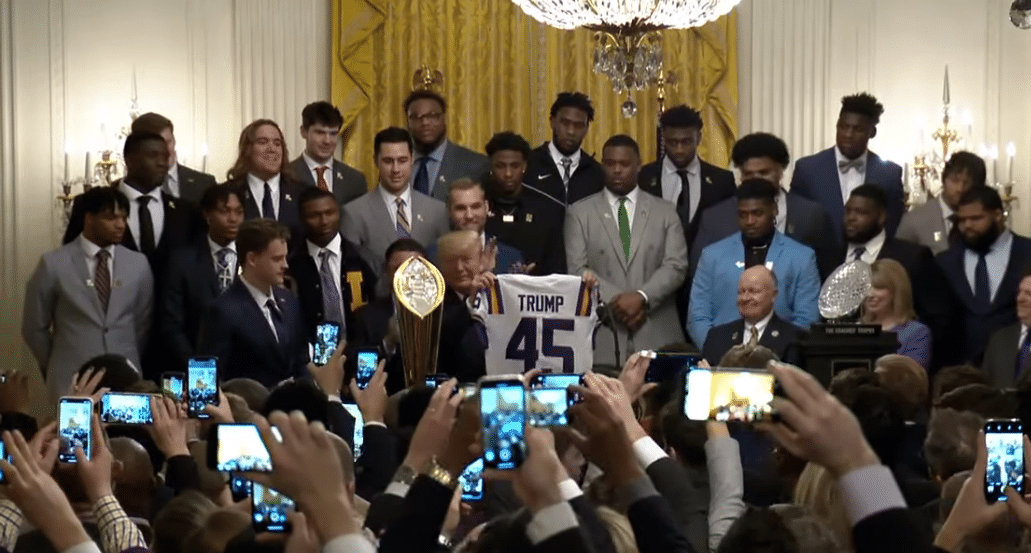 “We’ll take pictures behind the Resolute Desk,” he told them. “It’s been there a long time — a lot of presidents — some good, some not so good. But you got a good one now. Even though they’re trying to impeach the son of a bitch. Can you believe it?”

The LSU Tigers won over the Clemson University Tigers with a final score of 42-25 in the championship game on Monday. The team finished the season with a record of 15-0.

It is the school’s fourth ever national championship title.

President Trump and First Lady Melania Trump attended the game, garnering a standing ovation from the crowd and chants of U-S-A.

Crowd cheers @FLOTUS and @POTUS at the #NationalChampionship.

Chants of “U-S-A, U-S-A” could also be heard. pic.twitter.com/XasbyukoRB