President Donald Trump signed an initial trade agreement with China on Wednesday, the first of an expected two part agreement between China and the U.S.

Chinese Vice Premier Liu He joined Trump at the White House for the signing of the deal. Trump said he plans to travel to China “in the not too distant future” for the next part of trade negotiations.

Trump said he has kept many details of the deal secret in anticipation of its signing with China. Trump revealed Wednesday that the agreement will bolster intellectual property protections, including forced technology transfers to China. Trump said the deal also adds a “very very strong restrictions” against currency manipulation.

Intellectual property and currency manipulation have been two key trade concerns Trump has raised with China in the past. Trump said the new deal would grant “total and full enforceability” on those two items. 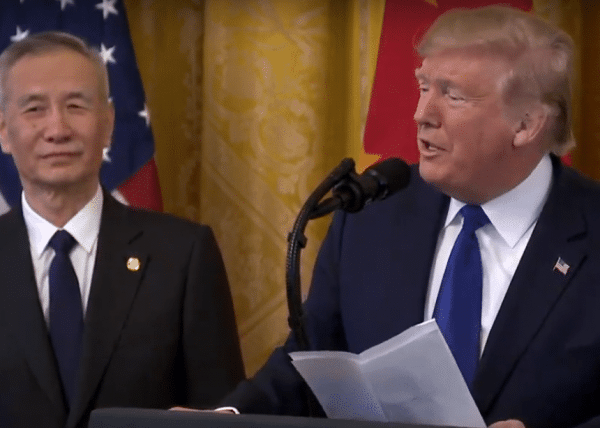 The first phase of the deal comes even as some trade tariffs between the two countries remain. The Trump administration carried out a “trade war” with China, as part of the negotiating process since the summer of 2018. 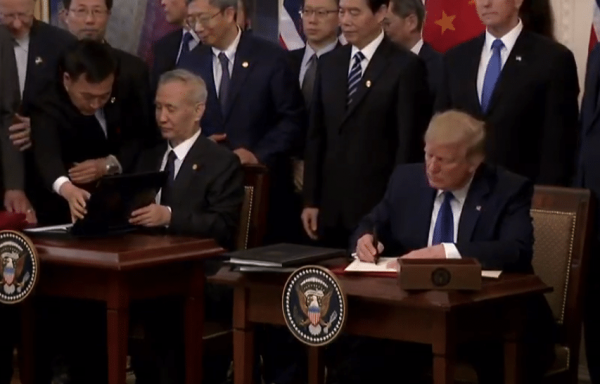 “We’re leaving tariffs on,” Trump said, “. . . but I will agree to take those tariffs off if we are able to do phase two.”

Liu read a letter from Chairman Xi Jinping, in which Xi called on both countries to commit fully to implementing the deal and called on the U.S. to treat Chinese companies fairly in their U.S. dealings.

Liu called the deal a “win win” agreement, that will benefit both the U.S. and China.