People, survivors and their families are gathering at Auschwitz today to commemorate the 75th anniversary of the camp's liberation in Oswiecim, Poland, on January 27, 2020. The Nazis killed an estimated one million people at the camp during the World War II occupation of Poland by Nazi Germany. (Robin Utrecht/Abaca Press/TNS)
January 27, 2020 Los Angeles Times - Jaweed Kaleem
Share
Tweet
Flip

It was 3 p.m. on Jan. 27, 1945, when the 322nd Rifle Division of the Soviet army entered Auschwitz, unaware of the inhumanity at the concentration camp where Nazis had killed more than 1.1 million people, the vast majority of them Jews.

Germans had abandoned the site, leaving 1.2 million pieces of clothing, 7.7 tons of human hair and other personal items stripped from prisoners. Allied soldiers came face-to-face with 7,000 of the weakest inmates not put on death marches _ and 600 decaying corpses _ as the Soviets closed in.

Exactly 75 years later, at exactly the same time, the picture was remarkably different at Auschwitz-Birkenau, the largest of the Nazi concentration camps and extermination centers.

More than 200 survivors of the most infamous Holocaust site gathered on Monday before the entrance to the Birkenau camp’s “gate of death,” where cattle cars once arrived to deposit prisoners into gas chambers before their bodies were turned to ash in crematoriums. 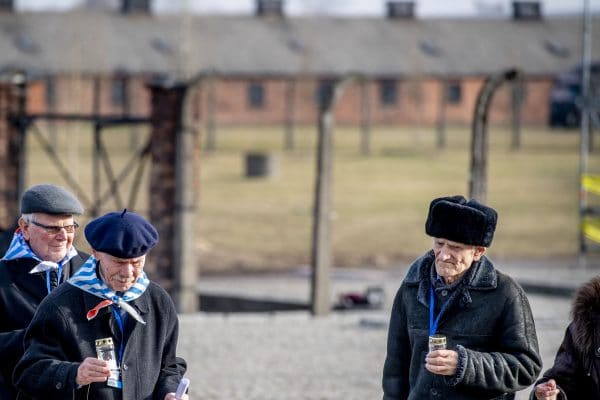 People, survivors and their families are gathering at Auschwitz today to commemorate the 75th anniversary of the camp’s liberation in Oswiecim, Poland, on January 27, 2020. The Nazis killed an estimated one million people at the camp during the World War II occupation of Poland by Nazi Germany. (Robin Utrecht/Abaca Press/TNS)

They sat under a large, heated white tent with spotlights and big-screen TVs shining down on the train line. Once a symbol of impending death, the tracks were now a walkway to a stage where former prisoners and the presidents of Poland and the World Jewish Congress would deliver their thanks to survivors for their perseverance.

“We are in the factory of death,” said Polish President Andrzej Duda as he opened the ceremony. “At no other time and in no other place was extermination carried out in a similar matter.”

The commemoration at Auschwitz-Birkenau, on the outskirts of the town of Oswiecim in southern Poland, was the culminating event in a month of global Holocaust observations. They included a memorial at Yad Vashem, the Holocaust memorial in Jerusalem, last week with world leaders and government representatives of several countries, as well as gatherings from Los Angeles to Amsterdam.

The meeting at Auschwitz-Birkenau Memorial and Museum took place five years after the last major gathering of survivors at the site.

That year, some 300 survivors made the journey. Several have died since, while health concerns kept others from joining this time. The declining number of living survivors of the camp, which saw 1.3 million people pass through it during World War II, has made this year’s observation even more important, said Auschwitz-Birkenau Memorial Foundation chairman and World Jewish Congress President Ronald Lauder.

“This may be the last ceremony of its kind for these heroes and victims, and one of the last times they will ever be able to speak publicly about their experiences,” Lauder said.

In total, about 400,000 Holocaust survivors live around the world today, according to the Conference on Jewish Material Claims Against Germany. About 85,000 of those are in the U.S. The numbers drop significantly for those who were at Auschwitz. There are fewer than 2,000 surviving former Auschwitz prisoners, a quarter of whom reside in the U.S.

One of them is Ben Lesser, 91, of Las Vegas, who spent several weeks in Auschwitz and was also imprisoned at Buchenwald and Dachau in Germany. He traveled to the former camp this week with his daughter, who lives in Los Angeles.

“I’m here to tell everyone to never forget,” said Lesser, who founded a Holocaust education organization, Zahor, back home. The word means “remember” in Hebrew.

Gabriella Karin, who came from Los Angeles with her grandson, survived for 14 months in 1944 by hiding in an apartment in modern-day Slovakia while invading Germans searched for Jews. Nazis murdered her cousin, Willy, at Auschwitz when he was 17.

“Auschwitz feels similar to me like going to the cemetery,” Karin, 89, said. “It’s where I can pay my respects to the loved ones I’ve lost.”

David Lenga, 92, was forced into hard labor at Auschwitz as a teen, and made the journey to Poland from Woodland Hills.

“I’m not here because it is fascinating,” said Lenga. “I am going to honor the victims’ memories and to make the world aware of where we stand 75 years after. The re-awakening of anti-Semitism today is frightening.”

In its most recent report, the Anti-Defamation League found the number of anti-Semitic incidents in the U.S. to be at their third-highest count in the U.S. since the ADL began its records four decades ago. On Wednesday, the Pew Research Center poll released a poll that found only 45% of Americans could identify that 6 million Jews were killed in the Holocaust.

But commemorations were clouded by political controversy.

Though Soviet troops liberated the concentration camp, Russian President Vladimir Putin boycotted the ceremony in Poland and instead only appeared at the Yad Vashem memorial in Jerusalem last week. Duda, who also withdrew from the Israel event, has taken offense to comments from Putin where he has cast partial blame on Poland for the war. Duda has accused Putin of telling a “historical lie.” Some Poles collaborated with Nazis but many Poles risked their lives to protect Jews. In 2018, the Polish government made referencing Polish complicity in the Holocaust a crime before backing down from the law under international pressure. It’s now a civil offense.

“Distorting the history of World War II, denying the crimes of genocide and negating the Holocaust as well as an instrumental use of Auschwitz for whatever purposes is tantamount to desecration of the memory of the victims,” Duda said in his remarks on Monday.

In an interview, Lauder, heir to Estee Lauder Companies, declined to address the political conflict. He has donated millions to advance Holocaust education since first visiting Auschwitz in 1987.

The focus, he said, should be “on these survivors who endured the very horrors that we are seeking to educate the world about today. As they share their eye-witness testimonies, the world will hear what they lived through, an unparalleled tool in Holocaust education.”