A tunnel entry team agent stands by for security at a tunnel spur that went off into a different direction. (U.S. Customs and Border Patrol/Released)
January 30, 2020 Ryan Morgan
Share
Tweet
Flip

Members of U.S. Customs and Border Patrol (CBP) San Diego sector have uncovered what the agency has determined to be the longest cross-border tunnel ever dug along the U.S. southern border.

The tunnel runs 4,309 feet — over three-quarters of a mile — from the Mexican side in Tijuana, Baja California to the U.S. side in San Diego, California, according to a CBP press release. The tunnel’s discovery came in August 2019 as the result of a multi-year, inter-agency investigation that used resources ranging from simple community outreach to more advanced tunnel detection technologies.

For the first time on Tuesday, CBP shared video of the tunnel.

“I am thrilled that this high level narco-tunnel has been discovered and will be rendered unusable for cross-border smuggling,” Deputy Chief Patrol Agent Aaron M. Heitke said. “I am proud of the tremendous efforts of the Tunnel Task Force and our agents.”

The SDTTF is a task force comprised of members of the CBP, Drug Enforcement Administration (DEA), Homeland Security Investigations (HSI) and the U.S. Attorney’s Office (USAO).

The tunnel is about five and a half feet tall, two feet wide and runs an average of 70 feet below the surface throughout. The tunnel also had a rail/cart system throughout as well as forced air ventilation, high voltage electrical cables and panels, an elevator at the tunnel entrance, and a drainage system.

A second video shared by CBP shows one portion of the tunnel where oxygen levels are low and a beeping oxygen alarm can be heard.

“While subterranean tunnels are not a new occurrence along the California-Mexico border, the sophistication and length of this particular tunnel demonstrate the time-consuming efforts transnational criminal organizations will undertake to facilitate cross-border smuggling,” said Cardell T. Morant, Acting Special Agent in Charge of HSI San Diego.

Mortant continued, “This discovery underscores the importance of the partnerships HSI has with the U.S. Attorney’s Office, United States Border Patrol, Drug Enforcement Administration and other regional agencies, as collaborative investigations and community outreach are key to combating this type of threat.”

The previous longest tunnel was also discovered in San Diego in 2014 and measured 2,966 feet long. 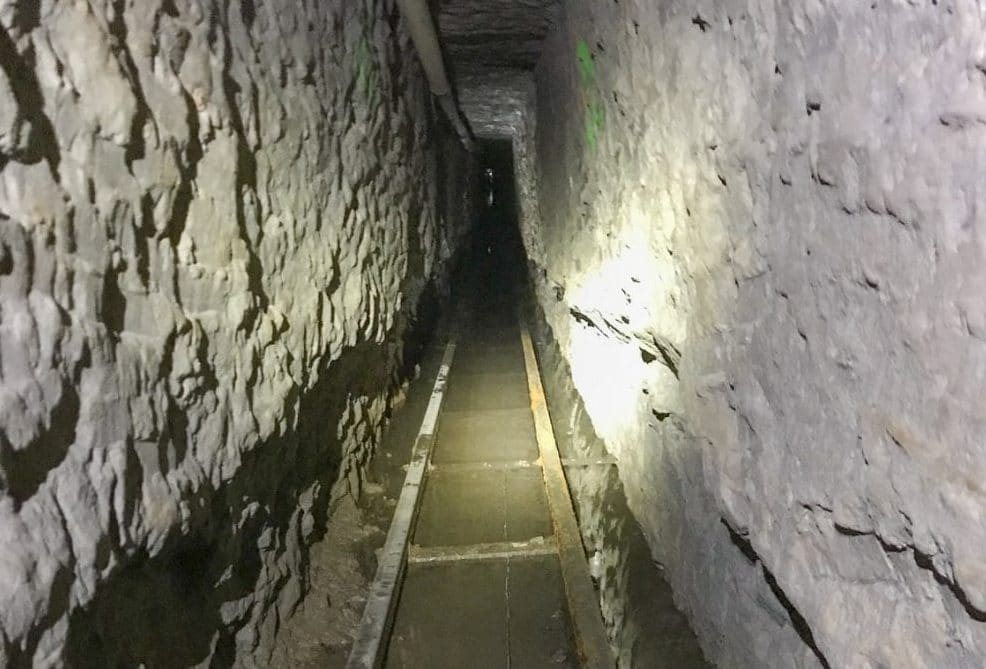 The tunnel is around five and a half feet tall, two feet wide and 4,309 feet long, averaging 70-feet deep and had a ventilation system, electricity and a rail system designed to move large packs of drugs. (U.S. Customs and Border Patrol/Released)

“The investigation continues, and I am confident that our hard work and dedication to uphold the law will lead to future arrests and seizures,” Heitke said.

No arrests or seizures have been made in connection with the tunnel’s discovery so far.

“Although the cartels will continue to use their resources to try and breach our border, the DEA and our partners on the Tunnel Task Force will continue to use our resources to ensure they fail, that our border is secure, and that tunnels like this are shut down to stem the flow of deadly drugs entering the United States,” DEA Special Agent in Charge John W. Callery said.