Louis San Miguel, then 94, works part-time as a cashier at Stop & Shop in Braintree. A retired banker, he enjoys being with people and says the customers are the best part of the job. Wednesday, May 1, 2019 (Greg Derr/The Patriot Ledger/TNS)
January 03, 2020 Sue Scheible - The Patriot Ledger
Share
Tweet
Flip

Louis San Miguel, featured in the Patriot ledger Good Age column last year as a part-time cashier at Stop & Shop in Braintree at age 94, will receive some of the recognition his family has been seeking for his WWII service.

Together with state Sen. Walter F. Timilty of the Norfolk, Bristol and Plymouth District and chairperson of the Joint Committee on Veterans and Federal Affairs, Louis San Miguel will be presented with a citation for his selfless service serving in the United States Army 103rd Infantry Division in France, Germany and Italy during World War II. Louis recently turned 95. 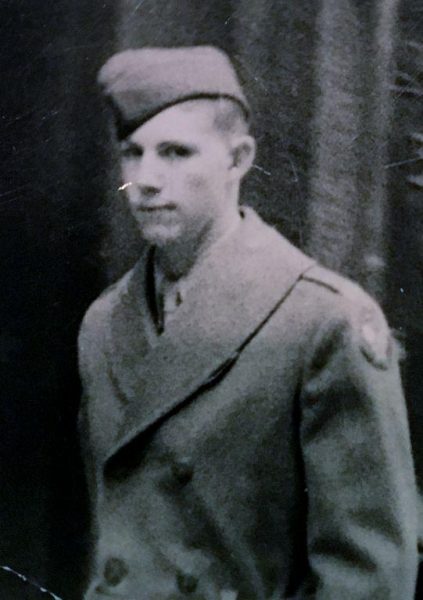 He and his wife, Lucille, have been married more than 67 years and have lived for 52 years in the same house in Braintree where they raised four daughters, born between 1953 and 1959, all with names starting with the letter L: Linda and Laura, both in Florida, Loretta in Revere and Lois in Dedham.

San Miguel started at the Stop and Shop as a cashier 20 years ago when he was 74. A few years earlier, he had retired from the Bank of Boston, where he was an assistant vice president.

San Miguel grew up in Barre, Vermont, where his father worked in the granite business in nearby St. Johnsbury. He graduated from Spaulding High School in 1943 and served in the U.S. Army infantry in France, Germany and Italy during WWII. He went to the University of Vermont on the GI Bill, majored in accounting and graduated in 1950. After working for five years for a cousin in Boston who had an export business sending women’s shoes to Puerto Rico, he took a clerk’s job with the Bank of Boston and gradually advanced to a management job.

His family had been seeking to have a Purple Heart awarded to him for an injury he suffered in World War II. 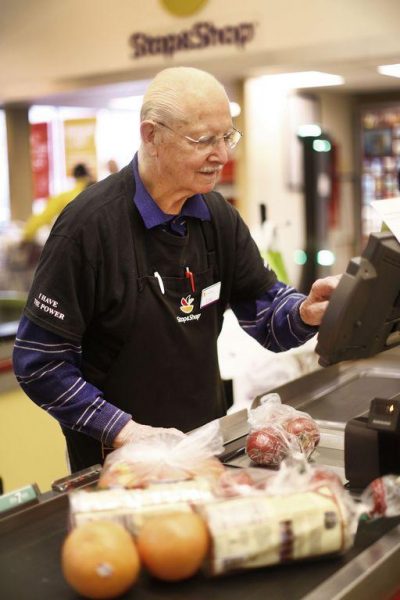 Louis San Miguel, 94 a cashier at Stop and Shop in Braintree enjoys being with people on Wednesday, May 1, 2019 (Greg Derr/The Patriot Ledger/TNS)

“My father was injured during his deployment to Europe,” his youngest daughter Loretta LaCentra of Revere said last May. “Unfortunately, he never received his Purple Heart and his service records were destroyed in a fire in St. Louis In 1973. Over the years, he has made several attempts to obtain the medal without success. At one time, they even requested he reach out to those he served with in order to corroborate his story, something not likely to happen at his age.”

In December 2018, LaCentra started the paperwork to attempt to get her father his medal. She also has contacted Sens. Elizabeth Warren and Ed Markey.

In a letter she wrote on her father’s behalf, she said that her father served in the Army, stationed in Europe, from Oct. 6, 1944, to March 36, 1946, and engaged in ground combat during the Battle of the Bulge. In the spring of 1945, in Schillersdorf, Germany, San Miguel was hit in the right shoulder by shrapnel from a mortar shell. He was treated at a battalion aid station, but his discharge papers do not reflect the injury.

In the early 1980s, San Miguel approached Veterans’ Services to inquire about how he could apply for the Purple Heart Medal and was told he was retroactively entitled to the Bronze Star Medal, which he did receive in June 1984.

He never heard anything back about the Purple Heart. He continued to reach out to local veterans’ service agents but his records were destroyed in a fire. Although it has been over 72 years, San Miguel and his family had always hoped that someday he would receive the honor of a Purple Heart Medal for his injuries.

“I would like my legacy to reflect that I served my country honorably and receive acknowledgement of my injuries by being awarded the Purple Heart,” he is quoted as saying in the letter his daughter wrote. “I am a proud veteran and I ask that you consider my request and honor me with the Purple Heart that I have earned.”

Trump warns Iran, terrorists: 'We will find you & eliminate you;' ‘We stopped a war, didn’t start one'