A man whose erratic, violent outburst near a Southeast Portland middle school last year generated local headlines was killed by police in Arizona last week during a similar confrontation.

The Sedona Police Department said a pair of veteran officers fatally shot Jonathan David Messare, 41, during a Jan. 20 encounter in the desert town, which is about 120 miles north of Phoenix.

Messare was yelling and screaming while brandishing a machete on a residential street when the officers arrived, police said. Three minutes later, the officers fired, killing the man. 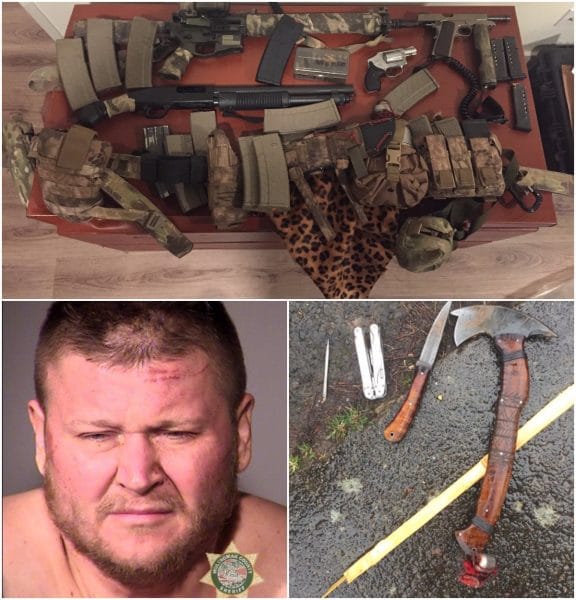 Portland police arrested Jonathan Messare in March after they said he showed up outside Hosford Middle School armed with a hatchet and other weapons, stripped off all of his clothes and later stabbed a responding officer in the hand with a knife.
(Multnomah County Sheriff’s Office; Portland Police Bureau/TNS)

The Arizona Department of Public Safety will investigate the fatal shooting, according to authorities. Police said Messare had recently moved to Arizona from Oregon, where records show he had a pair of outstanding warrants.

Portland police arrested Messare in March after they said he showed up outside Hosford Middle School armed with a hatchet and other weapons, stripped off all of his clothes and later stabbed a responding officer in the hand with a knife.

Messare also was accused of illegally stockpiling guns and ammunition at his Southeast Division Street apartment and violating a restraining order, the Portland Police Bureau said at the time.

Four months later, in July, Messare was taken into custody on the Oregon coast after police said he grabbed a hatchet and barricaded himself in a Tillamook storage unit. Prosecutors never filed criminal charges in that case.

A Multnomah County judge issued two bench warrants for Messare’s arrest after he failed to appear in court on separate cases in December, records show. One of them stemmed from his arrest in March, the other from an unlawful possession of a firearm charge filed in May.

In social media posts, Messare had written that he had served in the military and was seriously injured while fighting in Iraq. He also said he had increasingly struggled with his mental health after becoming estranged from his wife and children.

“I miss you all so much,” Messare wrote in a Facebook post published hours before he was killed. “This has been a hard time.”